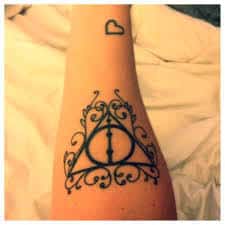 Even though it’s been years since the Harry Potter film series ended, there are still plenty of people who are interested in the long list of tattoo designs that spawned from those films. A lot of those designs are known as Deathly Hallows tattoos. On this page we are going to take a look at some of the many designs you can choose from as well as some of the meanings that are attached to those Deathly Hallows tattoos.

The Deathly Hallows is the final chapter in the incredibly popular fantasy series Harry Potter created by J.K. Rowling. Unsurprisingly, the book is insanely popular like the rest of the series and die-hard fans like just about everything in those stories. The Deathly Hallows symbol happens to be one of the most popular Harry Potter tattoos around because he held so much meaning in the story. It also happens to hold plenty of meanings to real people living everyday lives.

The seventh novel of the Harry Potter series details the closing of the wizarding trio’s schooling at Hogwarts along with the final adventure that eliminates the threat of Voldemort, the ultimate antagonist of the series. This was what everyone who read those stories and watched those movies waited to see, so the Deathly Hallows has been extremely popular for years now because of the way those storylines resonated with fans.

The Deathly Hallows themselves are three magical objects that were alleged to be created by the personification of death. The three objects, the elder wand, the cloak of invisibility, and the resurrection stone, are placed together to create the symbol of the Deathly Hallows. It is a simple design, yet there are multiple deep meanings that come with every Deathly Hallows tattoo.

The Deathly Hallows sign is very simply composed of a triangle in which a perfect circle sits. A line is drawn through the center of the circle and triangle, splitting the symbol. The triangle represents the cloak, the circle the stone, and the line the wand. If you didn’t know that you were looking at the Deathly Hallows sign, you might think that it was actually a very simple all-seeing eye with a vertical line drawn through it.

The individual who commands the use of all three objects in the Deathly Hallows sign is supposed to become the “Master of Death”, a feat which the main character Harry Potter accomplishes. By having all of those objects, Harry was able to do exactly what Voldemort had always wanted to do: become immortal. Obviously, this Deathly Hallows tattoo meaning alone is exactly what some people want in their tattoos, but there’s even more to it than that.

What’s great about the main Deathly Hallows symbol is that you can be as creative as you want with it to make it your own. Don’t feel like you have to make it look exactly as it looks in the film, though that is an option for you, of course. This is your tattoo, so you want to end up with a design that you will always be happy to look at. If you want to make it look authentic, do that. If you want to blend the symbol with some other designs you’ve thought of, there’s nothing wrong with that. Be as creative as you want with your Deathly Hallows tattoo because all that matters is that you are happy with it.

One of the most popular ways that people like to tweak their Deathly Hallows tattoos is to include it in a mandala design. The reason why this is such a popular design choice is because the mandala represents the universe, so it actually does work for everyone. Plus, triangles can fit in mandalas very easily, making Deathly Hallows tattoos a perfect fit in some cases. You can include a small Deathly Hallows symbol in the design or you can even build the mandala around the symbol. These look fantastic in black, which is the most common color used in these designs, but you can also make them work in other colors.

Since the release of the final novel, the Deathly Hallows symbol has become an emblem for fans of the series. Rather than using the “immortal” meaning, many fans will get their Deathly Hallows tattoo simply to show off their fandom. They wear the symbol proudly and they know that there are plenty of other people all over the world who agree that the Harry Potter satires are epic. Most Deathly Hallows tattoos are small so they can be worn on the wrist or on the ankle, but obviously the symbol can be made to be any size.

Most often, the symbol is tattooed very simply, as it is described in the novel, although adaptations are popular as well. Any of the objects can be rendered more realistically, showcasing exactly what the simple shape is meant to represent. The line that creates the wand can be designed as an actual wand, the circle a real round stone, and the triangle as a flowing cape or cloak. Usually, only one object is chosen to be drawn realistically to keep the symbol from looking cluttered or confusing. Also, since each symbol represents something different, owners of the Deathly Hallows tattoo can decide to make their favorite the most realistic and emphasize its meaning.

Different styles can be used to create the Deathly Hallows symbol, stepping away from the simple lines. Swirling line work can be added to the design to create more visual appeal as well as to feminize the image. It can be made to appear hand-drawn or as paint strokes rather than exactly proportionate. This opens up a lot of design space for tattoo artists who enjoy making unique tats. It also allows people to get unique Deathly Hallows tattoos rather than getting the more common designs.

Alternately, the symbol can be deconstructed, leaving the design to consist of the simple shapes placed alongside one another rather than together in a single form. In this way, the owner is showing that they want to use all of the meanings included within the symbol. They might even get other designs around each shape to make it clearer what each one means. It’s rare to see the symbol broken up in this way, but it actually makes sense since they are separated from each other for the majority of the Harry Potter stories.

Another creative way that you can use the Deathly Hallows symbol in your tattoo is to make it part of a text design. For example, since the symbol is shaped like a triangle, you can very easily turn it into an ‘A’ in a script tattoo. In many designs, the triangular symbol is used to represent the letter “A” in the word “Always”, another popular Harry Potter moniker.

Sometimes people like to find other Harry Potter phrases from the series to use with the sign as well. Again, this opens up a lot of design space and allows fans of the Harry Potter books and films to add as much meaning as they want into their Deathly Hallows tattoos. You can actually choose a phrase that has nothing to do with the symbol itself if you simply want to show that you are a fan of the Harry Potter series. Again, it’s really all about what makes you happy, so if you want to include text be sure that it is a set of words that will always be important to you.

If you know that your Deathly Hallows tattoo is going to be the only tat that you ever get, you can personalize the design even further. For example, you can add in your favorite animal, other symbols, or anything else you can think of that gives a clearer image of who you are. If you aren’t the creative type, most artists would be happy to help you come up with a design that contains multiple images without looking too busy. You really just have to find a tattoo artist with a good reputation and chances are you will end up being happy with the final product.

Even though most Deathly Hallows tattoos are quite simple and small, it is still important to take your time when choosing the perfect place to put it on your body. Do you want it to be visible to everyone? Do you want it to line up in a certain way on your skin? These are the types of questions you should ask yourself (and your artist) before you commit to the final placement. You want the tattoo to end up in the perfect place so you will always be proud to have it when you see it on your skin.

In most cases it is a good idea to choose a tattoo design that has a very specific meaning for you, but in the case of Deathly Hallow tattoos, you can get it if you just happen to be a fan of the book or film series. A lot of people pass over this cool design because they can’t find a deep meaning to attach to it. That’s usually a good instinct, but if you like the Deathly Hallows symbol and you are a huge fan of this universe, don’t hesitate to get one of these designs.

What’s great about Deathly Hallows tattoos is that they can work just as well as arm tattoos as they do as lower-back tattoos. The triangular shape simply works in most spots on the body. They can also come in just about any size that you want. You can get a large symbol that covers your upper arm or somewhere on your back, or you can get one that is small enough to fit on your finger. Obviously if you want a more detailed Deathly Hallows symbol you will want to get a larger design, but it’s always great when you can find a tat that you like that can fit just about anywhere you need it to.

You definitely have some options when it comes to designing your Deathly Hallows tattoo. You can keep it as a simple black design, you can add in some color, and you can even add in more images from the book or film series to make the meaning a bit clearer. If you are a diehard Harry Potter fan, you can combine multiple symbols from the movies or even add in some character art.

A lot of people like to include a favorite quote from the films above or below their Deathly Hallows tattoos. If you do choose to do this, be sure to pick a script that fits with the image so it looks like a single piece rather than multiple tattoos combined. Most people opt to use the script found on the Harry Potter posters and book covers, but this comes down to personal tastes. Be sure to factor in any text you include before you commit to a place to put the Deathly Hallows tattoo on your body.