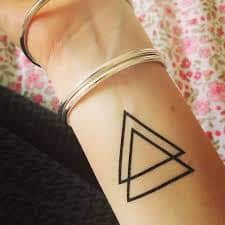 Perhaps you have seen a ‘double triangle’ tattoo on someone and were curious to know the meaning behind it. The triangle itself has always been a shape that we as humans have always found mysterious. This three-pointed, three-edged shape always seems to find itself in strange places. Not one, but two of these triangles overlapping one another, done in multiple directions, sure does catch the eye but what does it all mean? More than often, these triangles are linked to the Christian faith. Three points and three sides to every triangle, some say that each side holds a different sort of trinity.

A trinity is a Christian Godhead, one God in three forms. This is often the Father, Son, and the Holy Ghost. Some people decide to get the double triangle as a subtle way of showing faith in their religion. Although this is a popular concept, having the double triangle tattoo does not always have to center in on religious beliefs. The three sides and points of each triangle can represent your spirituality and your spiritual journey. The past, the present, and the future is another concept these sides can represent. If you feel a special connection with the moon, each side of the triangles can signify the stages the moon goes through, waxing, waning, and full. Whatever way you decide to perceive this tattoo, it always has a special and spiritual connection to the individual, and with the mystery of the triangle, it is the perfect way to subtly depict such ideals. Down below will be examples, designs, placement ideas, and some more meanings behind this concept.

The triangle is a shape that can be drawn in many different ways. In order for the triangle to look good as a tattoo however, would be to make the triangle equilateral. This means that each side is the same length. All angles inside of the triangle must be congruent, or the same degree, to each other as well. Before you go ahead and get this tattoo, the direction of the triangles plays an important part in the graphic of the double triangle.

If you see the double triangles both pointed in a downward direction, chances are that the individual sporting this tattoo is a woman. This is a female sign, as a male triangle sign would be facing upward. This downward double triangle on a female can symbolize their femininity, maternity, Earth, mother nature, and the cosmic world. Two downward facing triangles can represent all of these things and be a reminder to the individual that they are the supporters of life. This tattoo can usually be seen on the wrist, back of the neck, and on the shoulder.

The counter of the double triangle pointing downward, would of course be the double triangle pointing upwards. As the triangles that point down are a representation of females, the upward triangles are of course the representation of males. This is a strong indication of masculinity, parenting, the fierce element of fire, the sun, and a sub cosmic world. This tattoo is also seen quite frequently on the wrist, forearms, and the pectoral muscle on the chest.

A triangle that points upward, yet again as mentioned has the masculine characteristics, also symbolizes the element of fire and air. A downward triangle, involving the female characteristics, symbolizes the element of water and earth. A triangle that is pointed upward, and a triangle that is pointed downward right below the opposite triangle, can signify the creation of life. If you want to make this more aware to others and even give this tattoo more design, images of fire, and even gusts of wind on a mountain top can be placed within the frames of the triangle itself. The same as the triangle below, a scene of the ocean and perhaps a tree or another symbol to represent the soil of the earth can be sketched within the frames of the triangle. The coalition of the two triangles signifies the essence of life. Since this tends to be a bit of a larger graphic than the double triangles formed together, it makes almost a diamond shape. An image of this scale and figure is best placed somewhere on the body where you have enough room to show it off. The upper arm is a great place to consider, along with the forearm, or back of the neck.

Most double triangle tattoos are seen done as bold, black triangles overlapping one another. Although you can certainly do this, adding a little color to your piece is always an option as well. These do not have to necessarily symbolize anything, either. Adding a little color to the classic black ink double triangle not only makes it more appealing to the eye, it gives it that unique feel about it. The colors do not have to all be the same, however. One triangle for example could be blue, the other one could be red. Or if you want even more coloring, each side of the two triangles could be different colors. This gives off a kind of hypnotizing 3D illusion that is sure to turn heads.

Sacred Geometry is a phrase that we hear quite often, especially when it comes to researching tattoos that have shapes and figures within them. The double triangle is a perfect example of sacred geometry, but what exactly does ‘sacred geometry’ mean? Sacred geometry ascribes symbolic and sacred meanings behind certain shapes. Using certain geometric proportions, it is associated with God and God being the geometer of the world. These designs are normally seen being used to construct holy places such as churches, temples, and mosques. The triangle is used quite often as sacred geometry. Many people have a love for ancient Egypt. In Egypt, there are many pyramids, how these giant sculptures were created is a still a mystery of the world. This being said, the pyramids are a prime example of sacred geometry. Since pyramids all have triangular sides, many people have mixed the two ideas of the double triangle and the pyramids together. Two triangles overlapping one another and painted and designed like ancient Egyptian pyramids can make for a creative tattoo that not only shows your love for geometric patterns, but a love for ancient, mysterious, civilizations.