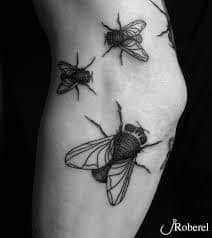 When we think of things to get tattooed on our body, most people will imagine beautiful things. We might look in the sky and use our imaginations on what tattoo to get. We look around and see trees, flowers and animals. All of which can be beautiful and make you feel nice. We might even look at some insects as there might be some cool ones but when you think of something beautiful, most don’t think of the fly even though it has an impact on our world in many ways. Whether we would get the fly tattoo or not, many people do, and they have good reason for it.

As with most things in this world, beauty is in the eye of the beholder. However, you might be hard pressed to find something that thinks a fly is beautiful. However, this doesn’t stop people from getting it. You would be surprised about the function of a fly and what it does for the planet.

In this post we plan to talk about the fly tattoo and what it symbolizes for those that get the tattoo. As we said above, the fly is a very important insect to our planet. Not only does it help the planet, but it has characteristics that many would hope to invoke by getting a tattoo. By the end of this post we hope you have a better understanding of the fly tattoo and what it represents.

Before we get into the meaning of the fly tattoo and what the fly symbolizes, let us talk about the purpose of the fly in nature. Believe or not, the fly isn’t just a pest that annoys people and feeds on dog waste. Flies play a big role in the food chain, agricultures and pollinating flowers. You might see them in a different light when you hear of some of the things they contribute.

When identifying a fly, know that there are over 100,000 species to look at. However, they all look similar have six legs and two wings. These wings help them to pollinate flowers. We all know of bees being the pollinators we all think of but flies play an important role as well. As they travel from flower to flower laying eggs and eating nectar, they pollinate the flowers. Some flowers even depend on flies and let off an odor to attract them.

Flies also work as pest control believe it or not. They eat a large amount of the insects that damage crops. They eat moth caterpillars, beetle grubs and aphids. Some farmers will even introduce specific flies to their farms rather than using pesticides.

Flies also have an important spot in the food chain. They are source of food for many animals including frogs, bats and many endangered fish. In addition, maggot waste is beneficial to the earth as it supplies nutrients to many types of fungi and mold.

As far as the fly tattoo meaning, it can mean different things depending on the owner’s perception. Despite many feeling the fly would have a negative symbolism, this isn’t true. The fly tattoo symbolizes business acumen, religious affiliation, perseverance, demonstration of negative qualities and a general interest in insects.

When used as a totem, the fly can also represent different traits. The fly represents the ability to multiply your ventures, prosperity and endeavors and a fast rate. You may be quick to act on an opportunity no matter how difficult it seems at the beginning. The fly totem or tattoo might represent the strength and determination to get something if need be. You are a resourceful person. You might need to occasionally remind yourself that you should balance humility with self-importance, but you are aware. You also have an ability of seeing beauty where others might not.

There are some additional traits connected to the fly and these include:

In the end, however, the meaning of your fly tattoo is going to be up to you. Nobody can tell you what it means and if you take something completely different out of the tattoo, that’s ok too.

When getting a fly tattoo, there are hundreds of ways to get this done. There are probably even more because this tattoo can be whatever you want it to be. However, we will talk about some of the common variations of the fly tattoo.

The basic fly tattoo is probably the most common one you will see. It is exactly what you imagine it to be. A tattoo of a fly. Although it is simple, it is equally as effective when sending a message. This tattoo can be placed anywhere on the body and is tattooed as the size of a real fly or made to fit an entire chest or back.

The fly as food tattoo might be an image of a frog eating a fly. It might represent what the fly does for nature in feeding many of its animals. The fly has many purposes and one is to nourish many species of animals.

Fly Bursting Out of Skin Tattoo

Finally, for our horror fans, flies can sometimes be associated with blood and guts as you will see them around decaying carcasses. This leads us to the tattoos where it looks like flies are feeding on a wound or are bursting out of one. It would be disgusting if it wasn’t such a cool idea.

The fly tattoo is a fun one to have with many meanings. It’s up to you how you want to display your own tattoo. If you need help finding an artist, please reach out to us because we would love to help.