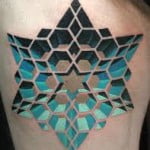 The styles of today’s tattoos vary a great deal. No longer are we in the days of only Sailor Jerry and traditional tattoos. These days, artists are getting more creative and are inventing new styles to work with to make tattooing a completely unique process that offers us the opportunity to let an artist’s creative mind work as opposed to just picking something out of the flash book.

Today we are talking about the geometric tattoo and what makes it so popular. Humans have always loved the patterns and contrast of a geometric image. Maybe it is our ability for recognizing certain patterns that have helped us along our way since prehistoric times. These abstract patterns excite something that lives deep in our soul and to see it tattooed on a woman or man, brings those feelings to the forefront. It takes a very skilled artist to come up with a geometric patter that works for us. The artist must work within the limits of the body to find a place to make the image fit.

What is a Geometric Pattern

A geometric pattern contains one design (usually of multiple shapes) that is repeated over a field to create a motif. The design is precise and continuous. Geometric shapes, any shapes with any number of symmetrical sides, are figures that can be described by mathematics. These shapes often fit together to make a geometrical pattern and are commonly seen. Because these patterns are made of a repetitious design, they are a representation of consistency, balance, and precision. Any image, symbol, or picture can be rendered in a geometric design. The image can be reduced to simple shapes in order to fragment it and recreate the image in its simplest form.

Geometric tattoo designs render a picture, often animals or portraits, into its simplest shapes, so that any complex design becomes simple and more easily understood. This fragmenting is a representation of knowing and a way of understanding. When done most simply, a geometric design is flat and lack dimension and can be taken at its face value. This represents the deconstruction of the world around us and can indicate that the individual regards the world in the simplest terms, rather than overthinking, overanalyzing, or overcomplicating life and nature.

Geometric tattoos provoke a feeling inside of us that recognizes different patterns. It’s almost primal. Our affinity for geometric patterns and tattoos go past that primal sense. The association with science, technology and math makes this style of tattooing seem much more updated. However, people that are fans of standard science can also enjoy this style which represents many ideas that are as old as math and science has been around. In addition, fans or art, in general, are usually fans of the geometric tattoo and how the angles form these pieces of work. The symbolism of the geometric tattoo resides in the image.

There are many variations of a geometric tattoo and this style can be used to convert any simple image into a geometric image. Because this is more of a style than an object, there are millions of ways this style of tattooing can be used. Below are some examples of different ways we’ve seen this style used.

In terms of the appearance of the geometric tattoo, negative space can play a big role. Only an artist with a solid understanding of geometric shapes can create a design that will be lasting and make the owner proud for years to come. One way to finish a geometric design is to put the 3D object on a flat plain as opposed to curved surfaces of the body.

Wolves, birds of prey, or other predatory animals are easily rendered in a geometric design and indicate the predator in humanity, the top of the food chain. Designs are often kept black and white because of the simplicity, but color can be introduced to brighten the image. Watercolor-style paint strokes are added in the background and add vibrancy to any image. In some designs, there are no contour or black lines and only blocks and shapes of color are used to create an eye-catching tattoo. The color is the most important element to this tattoo and may be chosen because of the attractive way to display a rainbow of hues.

Some geometric tattoos use half or part of an image or symbol, anything from a fox to a sunset, and render only part of it in simple shapes. A partially fragmented design is a representation of the interconnectedness of life in the universe. All things can be reduced to their parts which is shown in the simple geometric design contrasted with the more complicated and more realistic design.

Geometric designs can be done with depth and detail as well to create a complicated tattoo with shadow and dimension. These designs often rely on exact shapes and lines to create a striking image that tricks the mind into seeing a third dimension in a two-dimensional image. Artistry and precision are displayed in this tattoo as a talented designer is needed to draw and tattoo it perfectly.

The continuity of geometric patterns conveys reliability as well as predictability. Geometric designs can be large pieces that contain a repeating motif to create a full and complex image. The pattern can be calculated and the continuation of that pattern is known when the existing pattern is studied. This serves as a symbol of routine and comfortability that portrays a mind suited to logic and equation. These motifs are often used in the background of other images so that the symbol in the foreground is emphasized by contrast.

Geometric patterns are about balance and symmetry, the key to happiness and contentment. These designs, like sacred geometry, are appropriate for the mathematician who views the world as a compilation of shapes that work together in bigger way. Mandala designs work well in this sense as they encompass both geometric exactness and the harmony of the universe.

Geometric shapes are calculated and studied by geometry, which is highly concerned with the dimensions of each figure. Any image can be broken down into geometric shapes, rendering it as less realistic. The image becomes a mathematical equation that can be logically explained. Presenting images broken down in such a way renders them as seemingly less complicated. It becomes a fragmented version of itself that is more easily applied by others, but not necessarily more practical. Images of scale and design can be added into the tattoo to indicate this. Graphs and planes are introduced to highlight the necessity of mathematical precision in geometry and a disciplined mind.

Images that are created using geometric shapes convey an attempt to make sense of something that cannot be understood in other ways. The shapes deconstruct the image that they depict and project a fragmented and distorted variant of the original. This can convey the way an artist visualizes an image before the creation, or it can serve as a visual representation of a fragmented mind.

Additionally, it can show a path to understanding, where each individual part must be considered before the entire picture can be understood. In this way, geometric shapes are the building blocks of knowledge, the base to build perception or perspective.

It is vital that when you are looking to get your geometric tattoo that you find a tattoo artist that has experience in this area of tattooing. The last thing you want to do is show up at your local tattoo shop and grab any artist sitting around. You will have this tattoo forever so you want to make sure you take your time and go through the process. If you need help finding the right tattoo artist, do not hesitate to message us and ask for a recommendation. 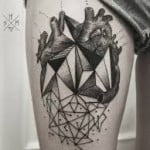 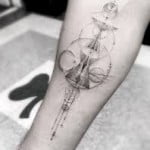 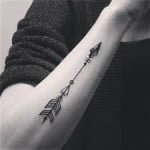 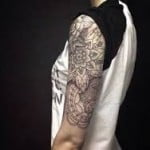 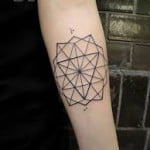 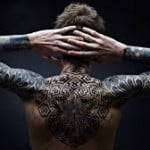 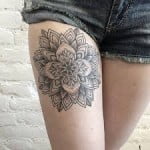 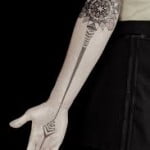 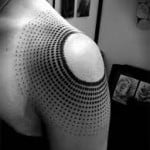 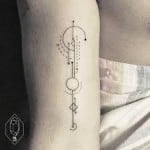