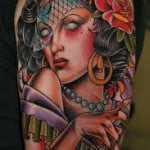 Many of us have hear the term “gypsy” in our lives. We might have known exactly what it meant but through TV and movies, we have a specific idea in mind. We can tell you that your idea a gypsy is probably not completely accurate. However, this doesn’t mean they aren’t a popular subject for tattooing.

Gypsies have been long associated with the exotic and mysterious. It is mostly because we don’t know much about these people. Gypsies have been said to people with no real home or a race of nomads.

Gypsy tattoos could encompass symbols that are important to the people that identify as gypsies or it might be pictures of what we think a Gypsy is. The important thing is that we understand more about the people we are talking about so we don’t offend them or have something tattooed on our body that isn’t accurate. You wouldn’t want someone walking up to you and going through a list of why your Gypsy tattoo is wrong.

What is a Gypsy

Gypsy is a term that defines a number of ethnic groups throughout history that have often found ways of living outside of conventional means. Considering that, it shouldn’t come as a surprise that the Gypsy tattoo comes in many designs and with many meanings. The majority of Gypsy tattoos are of female character, but it is considered a unisex tattoo because of the various meanings that can be given to these tattoos.

Gypsies’ origins lie in India, eventually dispersing into Western Asia and Europe. The word ‘Gypsy’ can be found in the roots of dozens of languages. This means that you can find Gypsy tattoos on people from all parts of the globe since they have special meanings pretty much everywhere. The designs and the meanings will be slightly different depending on where the person is from and the type of Gypsy tattoo that they get.

Gypsies, the Romani people, have a rich history and dozens of sub-groups that boast heritage from nearly all parts of Europe. People with Romani heritage will often have Gypsy tattoos that depict iconic pictures from their family’s history. They could have a picture of a relative, or they could have multiple images of items or places that are special to their families in some way. These are usually very personal tattoos that don’t have obvious meanings.

Gypsies is a term often synonymous with traveler because of their nomadic lifestyle. In this way, some people will get their Gypsy tattoos simply to show that they like the nomadic way of life. They may not lead that type of lifestyle, but the tattoo can show that they like doing things their own way and they value the time they have with themselves. People do not have to have Gypsy blood in them to get one of these tattoos.

Additionally, “Gypsy” sparked the term bohemian due to the many French Gypsies originating in the long-since annexed province of Bohemia. Bohemians are often seen as eccentric individuals, so some people will get a Gypsy tattoo to show that they enjoy living an unconventional lifestyle. It’s not necessarily that they don’t “follow the rules,” but they are happiest when they are in their own element, doing what makes them happy.

The mixed mélange of itinerant histories has painted the Gypsy as a travelling free-spirit, unlimited by the conventions of mass society. There are plenty of people who still love the hippy lifestyle, and one of the best tats to show that off is the Gypsy tattoo. When a stranger sees the Gypsy tattoo, they will usually think to themselves that the person who owns the tattoo is someone who marches to the beat of their own drum.

The wandering and roaming way of life lends the Gypsy an adventurous quality that is both fearless and bold. While there are many “adventurous” tattoos out there, the meaning is a bit more obvious when looking at a Gypsy tattoo. Right away you know that the owner or the tattoo is the type of person who does not living a boring life. Or, at the very least, they want to be an adventurous person.

The image of a Gypsy in tattoo form usually involves several patterns and colors to signify the disorder and adaptability of the lifestyle. A very common portrait is one of a woman with a headdress of some kind, which can include flowers and/or beads of many different colors. The woman will also usually have big jewelry on, including necklaces and big hooped earrings.

Because of their Indian roots, the hair and features of Gypsies are usually quite dark, portraying their ancient heritage. That doesn’t necessarily mean that the skin will be dark as many people choose to get their Gypsy tattoos with makeup on the face or they don’t fill in the face at all. The hair and the facial features will usually make it clear where the person is from, though.

There is a confidence in the Gypsy that allows them to remain on the outskirts of traditional expectations. This has also allowed the Gypsy to become pegged as a wild, uncontrollable spirit with a restlessness that is tamed only by an unrestrained life.

In literature, the Gypsy is often portrayed negatively as criminal and selfish because of their disregard for traditional customs. While most people would not want to use this Gypsy tattoo meaning, there are some who will get this tat precisely to show that they are to be feared.

The Gypsy is an often misunderstood traveler, moving on quickly when hardship forces change. Someone who has faced a lot of hardship in their life might want to get the Gypsy tattoo to show that they have the strength the move on.

The Gypsy soul is undomesticated and nomadic with strong bonds to their own clan but a fierce independence. This is why the Gypsy tattoo can be the perfect design for someone with Gypsy roots who is very proud of their heritage.

Most people think of Gypsy tattoos and think of the image of a woman in the American traditional style but there are many other symbols that the Romani people connect with and below are a few examples. For those that are looking for a Gypsy tattoo unlike the ones you have normally seen, these should do the trick.

Just because there isn’t an official Romani state doesn’t mean the people that identify with this don’t have their slogans and national symbols. The Roma slogan is “Opre Roma” or translated to “Arise Roma.” All the people in the Roma community recognize this slogan as theirs.

The Roma flag was adopted by the international conference called “United Roma of Europe” in 1933. It was organized by the General Association of the Roma of Romania in Bucharest. You could recognize the original flag by its two horizontal bars. The top bar was blue and there was a green bar on the bottom. Blue was a representation of eternal spiritual values and the sky while the green color was representative of eternal terrestrial values, fertility and the green fields.

In 1971, the Chakra was added to the Roma flag and this happens to be a popular tattoo as well. This is a representation of the chakra from the Hindu religion and it was chosen because of the Romani Indian heritage. The chakra looks like a wheel that is said to be a symbol of the traveling family of Roma.

The Gypsies are a people that are said to have no home or nomads. They are also known as “travelers” and actually have their own language which is Romani. The Gypsies identify as Romani people and they came from India to Europe many years back.

The history of the gypsies remained a mystery for many years and this mainly because there was no written language and therefore, no documents or writings about what they were doing. Because of this, Gypsies had even forgotten their origins because there were not historical documents. For years, Gypsies claimed to by Egyptian and therefore, got the name Gypsies. As time passed, the Europeans discovered the Romani language was related to some Indian dialects, and once that was determined, the origins of the Gypsies were slowly put together.

The Gypsies were an Indian people from the lower cast system and made their living as singers and musicians. The Persian King Bahram V was given 12,000 Gypsy musicians from the Indian tribe Jat, as a gift in the year 430. Most of them had been captured by the Byzantines in Syria in 855, where they were said to be great jugglers and acrobats.

The Gypsies were recorded in 12th century Constantinople history as being fortune tellers, bear keepers, sellers of magic amulets for good luck and snake charmers. The Greeks were warned by Balsamon to avoid the Gypsies as they were in cahoots with the Devil and they were “wizards and ventriloquists.”

Over the course of history, the Gypsies have been noted to live in many different places around Europe. In 1323 they were in Crete where they were described by Symon Simeonis as being a people that never stayed anywhere longer than 30 days and seem to always be on the run. They moved from field to field in tents.

In 1497, the Gypsies living in Modon were said to partake in all sorts of trade including cobbling, smithery and shoemaking to name a few. Gypsies were noted to be in Serbia in 1348, in 1362 they were in Croatia and by 1378 they were seen in Romania. Many of the Gypsies were kept as slaves and made to work as bakers, masons, servants, tailors and barbers.

Between 1414 and 1417, Gypsies were first seen in Hungary, Spain, Germany and Switzerland. At this time, they had a Safe-Conduct, which was essentially a passport that was given to them by the Holy Roman Emperor Sigismund. The Gypsies traveled Europe with safe-conduct letters given to them by the Pope after Sigismund passed. At that time, the safe-conducts from Sigismund were legitimate but the ones that were said to be from the Pope weren’t real.

And this is just the beginning of the traveling for the Gypsies. The gypsies were always on the move but were a fascinating people. 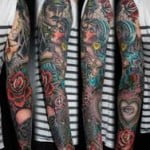 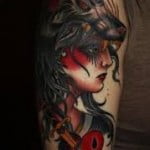 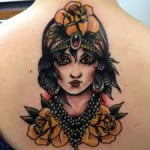 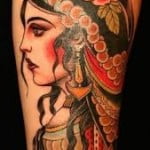 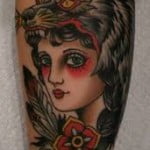 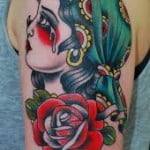 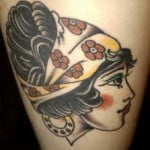 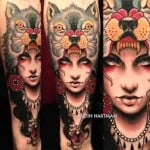 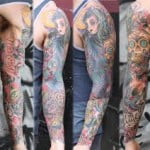 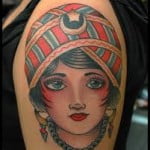 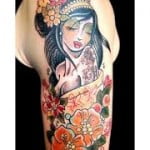 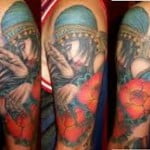 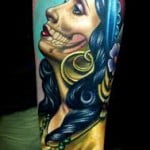 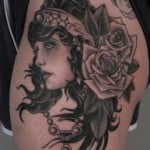 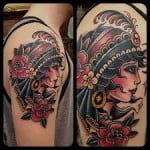