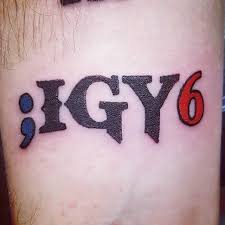 As we go through our journey of life, we run into a lot of issues and stumble at points. This is a regular occurrence with most people. Nobody gets through life unscathed and these are things we must deal with. However, some people are dealing with ailments on top of the everyday problems we run into. Depression, anxiety and PTSD (Post Traumatic Stress Disorder) are some of the problems many of us face. When dealing with one of these problems and then adding the hard parts of life, it can lead to bad things. Suicide being one of these. IGY6 is part of the program to help the cause but first, let’s talk about the problem more in depth.

The suicide epidemic is why Project Semicolon was created. It is to help those that are considering suicide or self-harm as an answer for their problems. The semicolon is used when an author was going to end their sentence but still had more to say. You can add a semicolon to the end of a would be sentence and continue on with another though. The idea behind this is to let those considering suicide that their story is not over. Put a semicolon at the end and continue moving forward.

Just to elaborate on how serious suicide is in the U.S., let’s go over a few stats. Suicide ranks 10th in the United States for leading cause of death. There are 44,965 suicides in America every year. For every suicide, there are 25 attempts and it costs the country $69 billion a year. In addition to those startling facts, on average, there are 123 suicides daily. In 2016, 51% of suicides were committed using a firearm. Men commit suicide at a rate of almost 4 times the number of women and of those men, white males are far more likely to do so.

These stats should go to show you the seriousness of the suicide problem in the states and Project Semicolon does a great job of increasing awareness for this issue. Let us move on for the topic of this post which is the IGY6 tattoo and what it means. We will talk about the IGY6 tattoo and what it means for the people wearing it and how it relates to the issues at hand. By the end of this post we hope you have a better understanding of the problem and what people are doing to help.

The IGY6 tattoo or ;IGY6 tattoo was born out of Project Semicolon. We know the semicolon is used to continue a sentence when things could have potentially stopped. The semi colon creates a pause. This pause represents a reconsideration of the plan to harm yourself. From this, we get the IGY6 tattoo which stands for “I Got Your Six”. The six stands for your six o’clock which is behind you. It’s a term used in the military and means behind you. To put it more clearly, it means, “I Got Your Back”. The people with this tattoo are letting everyone know that they are in full support of the project and are there to help the people suffering from these problems that lead to suicide.

The colors of the IGY6 tattoo have relevance too. You usually start with a teal semicolon and teal is the color of awareness for PTSD. The black color of the “IGY” represents the heavy hearts that we all have for those that are suffering from PTSD or have lost a loved on from suicide. The “6” is usually colored red which symbolizes the blood that has been shed over the years of losing people to suicide.

When you combine these symbols and colors together you get a message that basically says to think about it before you decide to take your life. Take a pause are really think about the decision you are going to make. It also says that there are many people out there that have your back and will be there for you if you need a shoulder to cry on or an ear to bend. If you see someone with the IGY6 tattoo, they are a friend and there to help you.

If you were to ask someone about their IGY6 tattoo, they’ll tell you many of the same things we just talked about but even with the specific message this symbol sends, there are some variations of this tattoo. Below are a few that we have seen and the meanings of the tattoos.

The IGY6 tattoo combined with the 22 is another way to portray the same idea. The statistics show that 22 veterans commit suicide each day and the 22 added to the IGY6 tattoo is a way to show your support to the veterans along with everyone else. You can find more information on this from the website, Twenty-Two Until None. The goal is to do the things to get the suicide rate from 22 veterans a day to none.

The IGY6 tattoo combined with the skull is used to really emphasize the problem we have today with suicide. The skull symbolizes death but potentially a new beginning. It can have a double meaning in this case. First to show we are trying to prevent these deaths by showing the skull. Secondly, the skull is used to symbolize new life in some cultures, so it adds to the meaning of the semicolon in that we can reconsider the thought of suicide and just start over.

Adding a military insignia or logo with the IGY6 tattoo shows the support for all the veterans out there suffering from PTSD, depression and anxiety. This is to show specific allegiance to their fellow soldiers and let the world know they are there to support and soldier that is considering ending their lives.

Suicide is an epidemic that we need to get a grip on as it is tearing apart families and taking people way too soon. If you are considering suicide, please reach out to one of these groups for help. Believe us when we say that there is someone there for you to listen.