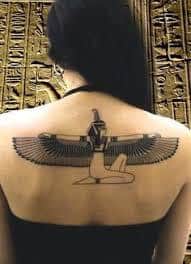 Isis, the “Goddess with Ten Thousand Names”, is a popular subject when it comes to getting a tattoo. While she literally didn’t have ten thousand names, she was known by many others including Iahu, Hesat, Eenohebis, Aust and Werethekau. The Isis tattoo can be worn by anyone but in more cases than not women tend to have this tattoo inked on them. Isis was the Egyptian Goddess of motherhood, marriage and fertility which tends to be more of a feminine statement.

It was ancient Egyptian lore that first depicted Isis as a goddess. The story says that she was married to Osiris who was the king of Egypt and her brother. She supported her husband and also taught the women of Egypt to be self-sufficient and do things like baking, brewing beer and sewing. However, Osiris’s brother Set was not happy with things the way they were and wanted the throne for himself. He convinced Osiris to get into a wooden chest. Set then coated this chest in led and threw it into the Nile.

Isis was not able to forget about her husband Osiris and searched long and far for the wooden chest containing her husband. Eventually she was able to find the chest and transport the box back to Egypt. When Set found out about this, he was furious and had Osiris’ body removed from the casket. He then chopped the body into 14 pieces to be scattered all over the world and disposed of forever.

Isis was not going to give up and with the help of her sister Nephthys, she was transformed into a bird and was able to fly all over retrieving 13 of the 14 parts of her late husband. With he magical powers, she was able to make Osiris whole again, albeit all bandaged up and he was neither alive or dead. It was just enough time to conceive a child and then Osiris had to retreat to the underworld where he became the king of the dead.

Nine months later Isis bore Osiris’ son Horus Iris then fled with Horus to the Nile delta marshes where she hid until Horus was old enough to attempt to take back the throne from Set. She protected Horus from all the monstrosities of the marsh. When the time came for Horus to retake the throne, Isis had a hard time taking a side as Set was also her brother. Horus had his mother beheaded for what he felt was a betrayal but later reconciled after the beheading was reversed by magic and was able to take the throne.

It was said that Isis helped usher the dead into the afterlife as she did with her husband. She was known as a good Egyptian wife because of her willingness to stand in the background but was also able to use her wit and magic when she had to. She was known as a protector because of what she did for Horus, but even more powerful than her motherly instincts were her magical powers that were said to be the most powerful of all deities. She was often reinvoked on behalf of the sick and dying. She also protected the dead on the other side.

Because of this and her relationship with mankind, she was said to be the divine mother of the pharaoh. Many temples were erected in honor of the goddess Isis in Egypt and the neighboring Nubia during the first millennium BCE.

Fast forward to the Hellenistic period when Egypt was ruled by the Greeks, Greeks and Egyptians worshiped the goddess Isis. In addition, Isis was worshiped by Greeks more so for her traits similar to other Greek gods like the invention of marriage and protecting ships at sea.

In the fourth and fifth centuries CE, worship for the goddess Isis ended because of the rise of Christianity. Some say aspects of Isis were taken into account in Christianity like the mother Mary but those are just speculation.

The goddess Isis is depicted in many ways in Egyptian culture. She is shown as a human woman and a goddess. She wears a vulture headdress which looked like a bird laying on top of Isis’ head with the wings draped over each side of her head and the head coming down over her forehead. She holds a papyrus scepter while also holding an ankh. She is many times depicted as having long wings or arms with wings on top of them.

She has also been depicted wearing a crown made of the horns of a ram or horns surrounding a sun disc. As a human, Isis was shown wearing plain clothes wearing a headdress with an Uraeus on it which is essentially a stylized spitting cobra.

The goddess Isis had many roles in ancient Egypt including that of the mourner and wife, the mother goddess, goddess of kingship and protection, goddess of magic and wisdom, sky goddess and universal goddess.

It is clear to see why many women and even men would want to have the goddess Isis displayed on their person. She was idolized by women and was a one of the first strong women figures in existence. We really hope that by reading this post, you have a better idea of the origins behind the Egyptian goddess Isis tattoo and why so many people are drawn to the beauty and power of this symbol. She was a protector, a mother, and a goddess of powerful magic. She is and will most likely always be celebrated in Egypt and rightfully so.

Please take a look at the pictures below for Isis tattoo ideas and designs that you may want to use during your next trip the tattoo shop.