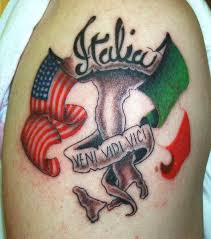 The Italian people are very prideful of their heritage and for good reasons. So many great things came from Italy. Some of the best art in the world resides in Italy. The Sistine Chapel painted by Michelangelo is there, the Opera is rooted in Italy, some of the best fashion designers are there as well. We also can’t forget about pizza and The Godfather (I know this was made in America).

These are just a few of the things that make Italy such a great place but some Italians, or fans of the culture, want to represent their country in different ways than going to Italy. Some people choose to get tattoos to represent their heritage and the Italian tattoo is a very popular subject as there is a lot of pride involved. There are also plenty of symbols to choose from with a great deal of meaning for the country so finding one that most represents what you are trying to convey is important.

The meaning of the Italian tattoo is pretty easy to gather. Most people will get tattoos for things they love or want to represent. Because those with Italian blood are so passionate about their home and in general, the tattoo is a great way to show that pride. Below are some of the different variations of the Italian tattoo that we have seen over the years and they all have a specific symbolism that relates to the Italian culture in some way. We understand there are plenty of other ways to get an Italian tattoo but this should give you enough to start with along with the pictures below.

The flag of Italy is a very popular image to have tattooed and for obvious reason. This is the symbol that represents the country and most people have no trouble identifying where this flag comes from. It has also been referred to as il Tricolore. The flag is three vertical stripes that are equal in size and use the colors green, white and red, from left to right. Italy has been using this current form of the flag since 1946 and in 1948 it was officially adopted as the flag of Italy.

The symbolism isn’t completely clear but some say the colors have meaning. The green color is a representation of the hills and plains of the country while the while symbolizes the snow capped Alps. The red is said to symbolize the blood that was lost during the Wars of Italian Independence and Unification which went from 1815 to 1871.

The Capitoline Wolf is another symbol that is often depicted in tattoo form. It is a sculpture made of bronze represent the mythical she-wolf and twin babies, Romulus and Remus, nursing from the wolf. It is an odd image but has a great deal of meaning.

This statue is a symbol of the founding of Rome. When the grandfather of the twins, Numitor, was overthrown by his own brother Amulium, the twins were cast out and into the Tiber River. Legend has it that a she-wolf saved the babies and took care of them until Faustulus, a herdsman, raised them after he found them. You can still find this statue in Rome in the Palazzo dei Conservatori on the Campidoglio.

Replicas of the Capitoline Wolf have been sent all over the world as goodwill gifts. It has been used as logos and on memorabilia.

The emblem of Italy was taken on by the Italians on May 5, 1948. From then until now, it has been a symbol that is representative of what Italy is all about. It also referred to as the coat of arms. Because it wasn’t created to follow traditional heraldic rules, it is known as an emblem.

The Emblem of Italy consists of a five-pointed star in the middle with a red border tracing the star. There is a cogwheel with five spokes superimposed in the background and both of these sit between two branches. One of these branches is the oak branch (right) and the olive branch (left). A red ribbon ties these two branches together with REPVBBLICA ITALIANA inscribed on the ribbon. The Italian government uses this symbol extensively but it is also known to make a really cool tattoo.

In most cases, those that get the Italian tattoo, or other countries for that matter, were born in a different country. Therefore, many of these tattoos incorporate two different flags as a representation of who they are. They might even use other symbols of the country as a way to represent them. For instance, if someone was Italian American, they might have the wolf and the bald eagle in one tattoo as a symbol of pride for both parts of the person.

The fun part about a tattoo like this is that you can get really creative with it. Any symbol that represents Italy can be used. The hard part isn’t finding the ideas of what tattoo you are going to get, it is the process of finding the right artist. You will need to know what you want first and then you can find a tattoo artist that works in that style. Make sure you are comfortable with that person and your tattoo experience should be one to remember forever.