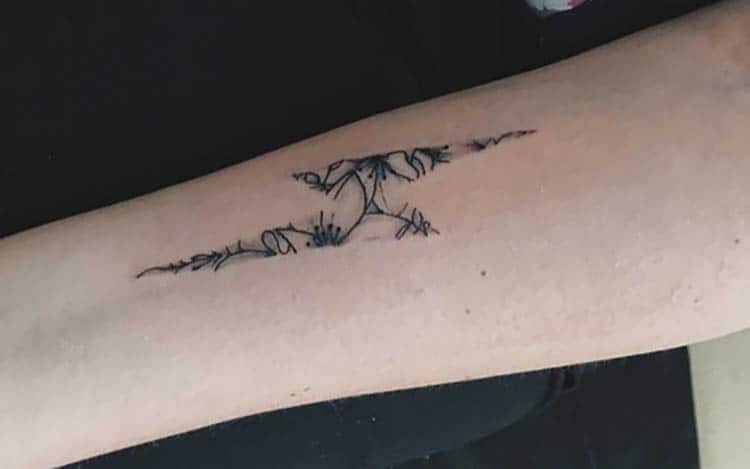 When looking for strong symbols to have tattoo on your body, the lightning bolt comes to mind. This force of nature is ever present in our everyday life but also extremely terrifying. To be touched by a lightning bolt meant you were most likely going to be dealing with a serious injury or death. To see a lightning bolt in the sky makes you realize how small you are in the grand scheme of the world. Nature is a very powerful force and it’s not to be tested.

Many people in the world respect nature, as they should. They also choose to get tattoos in honor of these natural occurrences. You might see wave tattoos or volcano tattoos. You might even see images of flooding or tornados, but the lighting bolt might be one of the fiercest occurrences in the world. Because of this, people get tattoos of lightning bolts. They might not always be for the same reason, but you better believe they understand the power associated with the lightning bolt.

About the Lightning Bolt

Lightning is tremendously hot, and it can heat the areas around the strike up to five times the temperature of the sun. What happens when a bolt of lightning strikes is the heat creates the air around it to vibrate and expand which creates the thunder we hear soon after seeing the bolt of lightning.

When lightning bolts are designed simply using just the zigzag shape to define the image it can be filled in with any type of pattern or design and be rendered large or small. The options are endless ranging from colors and animal prints to portraits and landscapes. If depicted on their own, regardless of the filler, they often signify a spirited person with electric energy. In other cases, if the bolt is shaped like a sharp and jagged “S”, the tattoo represents the novel and movie series Harry Potter and may be accompanied by glasses or phrases taken from the novels. The shape can vary greatly from design to design and some include arrowheads at the base, creating a symbol of direction incorporated into the bold sign of the lightning bolt.

People tend to creative when getting tattoos that represent nature. Many images can be added to these pictures which might impact the meaning of the tattoo. The lightning bolt on its own has a great deal of meaning but can be paired with other images that might reinforce the meaning of the tattoo or change it up completely. Below are a few examples of lightning bolt tattoos and what they symbolize.

Some lightning bolt tattoos include clouds that emit the electric strike and can be depicted as a cartoon or more realistically. Both realistic and stylistic components can be included in one design. Realistic bolts of lightning with brooding storm clouds done in greyscale or dark blue and violet hues enclosed in the contour zigzag shape of a lightning bolt icon. With both elements included, the design may reveal the multiple layers and depth of the individual’s personality. In other designs, there may be a single cloud and bolt or a flurry of stormy clouds with multiple streaks of lightning ejected from them. In more realistic renderings, the image of Greek god Zeus is sometimes incorporated or a powerful hand that represents the might of the deity.

The lightning bolt can be rendered in bright colors with thick, black contour lines like in a comic book. When a vivid yellow bolt is placed on a white circle on a field of red it becomes a symbol for the DC Comic book hero The Flash, the epitome of superhuman speed. Other combinations of colors or a lack of color may be used to distance the design from that of The Flash and serves as a representation of a striking quality or characteristic or could be an homage to a runner or athlete.

Minute lightning bolts can be placed anywhere on the body and depicted as a cute cartoon symbol. This design demonstrates a sweet and whimsical personality and is often done along with other small icons like heart shapes, stars, clouds, flowers, etc. In other designs, a pattern or graphic is used to create the shape of the lightning bolt and is chosen for the striking appearance.

Many fans of the Harry Potter series will get the tattoo representing the scar on Harry’s head. The people with this tattoo might just be big fans of the series and wanted to get a tattoo that is small and can be hidden. It is a simple tattoo that sums up the fandom of the series in one small image. Harry had the lightning bolt scar on his head because Voldemort tried to kill him as a baby and it was all that was left to show of the attack.

What this scar represents is the connection between Voldemort and Harry. When Voldemort casts the Cruciatus Curse, Harry feels immense pain solely on the spot of the scar. Anytime he has a dream about Voldemort, his scar starts to be painful. It is one of the most recognizable symbols for the Harry potter series and a great tattoo choice for fans of the show.

When talking about images that represent David Bowie and his album named Aladdin Sane, the lightning bolt on Bowie’s face for the album cover says it all. Because this is such a loved album, you will see many fans of Bowie have this small lightning bolt tattooed on their body as a symbol of how much they love him. Not only does it represent their love for David Bowie, but it looks colorful and cool at the same time. Not everyone will know who David Bowie is, but they will be asking about the tattoo because it will be an attention getter.

No matter what you decide to do with your lightning bolt tattoo, it will be a very symbolic symbol. We just want to remind you to take your time when looking for a tattoo artist as making the wrong decision could end up costing you in the long run. Take your time and have a sit down with your potential artist. If you are having difficulty finding an artist, we can help. Just reach out and ask because we’d be happy to help.