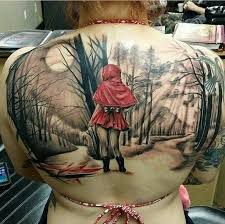 Of all the tales told over the many centuries that people sat around the fire or with loved ones, the tale of Little Red Riding Hood is one that has stood the test of time. The story can be traced all the way back to the 10th century when it was first told as a European folk tale. The tale is one of danger and listening to your parents. However, times were different when this tale was first told and much less politically correct than current times. We will get into the story later in this post.

That tale that most of us have heard originates with the Brothers Grimm story of Little Red Riding Hood. In this story, Little Red Riding Hood is named after the red hooded cloak or cape that she is wearing. The story starts with the girl walking through the woods with the goal of delivering some food to her ill grandmother. In most stories she is bringing cake and wine, but much of this depends on the translation. In the version created by the Brothers Grimm, her mother told her to not veer off the path on her way to her grandmother’s home as it could be dangerous.

During her travels, a wolf starts to stalk her for her food in the basket as well as wanting to eat her. He follows her until deciding to approach her harmlessly. He talks to her and find out she is heading to her grandmother’s place and suggests that Little Red Riding Hood pick some flowers for her. She agrees and while she is doing that, the wolf goes to grandmother’s house, tricks her into opening the door and swallows her whole. He then waits, disguised as grandmother, for Little Red Riding Hood to show up.

Many of the stories told over the years end there but in Grimms’ version of the story, a hunter shows up to rescue them, cuts the sleeping wolf open with his axe and frees grandmother and Little Red Riding Hood. They fill the wolfs body with heavy stones so when it awakens to try and leave, the wolf collapses and dies.

The tale is a story of the safe world versus the dangers of the forest. It also warns of not listening to your parents because bad things can happen.

First comes natural cycles. Some have seen Little Red Riding Hood as someone that represents the sun because she wears the red hood and the wolf that swallows her whole can be a representative of night. Then talk about the hunter freeing Little Red Riding Hood and her grandmother from the wolf’s stomach and that might be a symbol of dawn. It could also symbolize the seasons in the same way.

The Little Red Riding Hood tattoo is also a symbol of puberty or becoming a woman. When she leaves her home, she is still a girl, but through the tribulations of what she experienced on her way to grandmother’s house and being cut out of the wolf’s stomach she was born again a woman.

We also tend to see a lot of montages involving the wolf and Little Red Riding Hood. There are many creative ways of doing this and if you search, you are bound to see the creative nature of those getting this tattoo.

The important thing is to know what you want and then find an artist that is capable of making your idea come to life. If you need help finding someone to help you with this, please reach out to us.