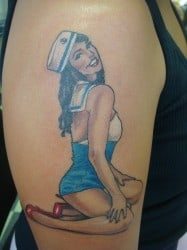 When you think of old sailor tattoos, many will think of anchors, lighthouses, sharks and other aquatic symbols. They would be right in thinking that these are some popular choices for sailor tattoos. However, one option that many sailors and men of the time would get is the pinup girl tattoo. This isn’t really surprising when you remember that these men that sailed the oceans didn’t see a woman for months at a time. They were in tight quarters on a boat with a bunch of other smelly guys. To look at a picture on the wall would give them hope that one day they would be back and get to see their wives, girlfriends or any woman that would have them. In other cases, they would get tattoos.

To get a pinup girl tattoo is a way to have the thought of home with you at all times and in some cases, it only takes an idea to get you through the tough times. The pinup girl tattoo is an American traditional tattoo that is reminiscent of old times. Many are big fans of the traditional style but that isn’t the only way that pinup girls were tattooed on the body. However, it is the way they started we understand the thought behind that.

The quintessential pinup girl tattoo is a throwback to a time when people had only one outlet for displaying and advertising sex symbols, a photograph or picture cut out from printed media. The origin of the term is a literal definition, as a woman so memorable that men would cut out her picture and pin it up to their wall, bunk, or locker. Often these were modified from photographs of the celebrities at the time that were considered to be sex symbols, with the main girl of the time being Betty Grable then with the rise of Pop culture, Marilyn Monroe.

Betty, and her legs, was the main girl to be seen in pictures carried by the GI’s of the time. During the war the pictures went from being on the walls of the bedroom into the pockets of soldiers as both a reminder of a beautiful girl who performed for troops, and as a little chunk of Americana to remind them who, and what, they were fighting for. The original posed photo of Betty is still in use today as a basis for the modern pinup tattoo. The real idea of a pin up girl is any girl who transmits the plain and simple sex appeal of a beautiful flirt. Often the tattoos of these girls will have them scantily clad and posing seductively to attract the eye. They serve to attract the eye with a coy smile and a promise of more waiting for them when the soldiers return home.

Fernande Barrey, a French model in the early 20th century, was one of the first models who posed with her breasts exposed and following this, the “Vargas’ girls” drawings featured in Esquire magazine became popular images for soldiers. These women were positioned in erotic poses either nude or semi-nude and became iconic as pinup images. The women were often designed wearing feminine forms of soldier’s uniforms in an effort to show America’s support of their armed forces during the second World War. The women are exclusively American although the concept has since been adopted to feature women of various ethnicities. “Petty girls” rendered by artists George Petty were another iconic pin-up image from the 1940s and 50s, although less nudity was incorporated into these. The efforts of these artists helped to maintain the morale of American men both at home and overseas while war was raging.

Larger pin-up pieces that are modelled after Alberto Vargas’ and George Petty’s designs include imagery that represents a specific branch of the military. A woman wearing a navy or sailor’s uniform may be encircled by anchors and nautical stars, while a soldier-themed piece may include medals or US army insignia.

Pin-ups often took on special meaning for the troops and the times, so patriotic designs, hula girls, or state symbolism (cowgirls, California blondes, Southern belles) personalized the images. The Classic Pin-up, or vintage tattoo, harken back to Old school design in colors and style. The design is more animated than realistic and recall a simpler style that could be rendered easily with the tattoo equipment available decades ago. The modern Pin-Up has evolved into anything from Zombies to bright and cartoon-y smooth New School with the innovations in machine and ink technology.

In modern designs, pin-up girls, and sometimes men, are designed in a variety of ways. The Pin-up girl tattoo design has always focused on a seductive girl as a representation of the female form. The designs focus on desire, whether male or female, as well as erotica and, somewhat contrastingly, wartime and post-war America. Many pin-up girls are rendered with tattoos and piercings themselves, delving further into the taboo. Whether boldly outlined Classic, or highly rendered Modern, it is a staple of body modification and adornment.

In most cases, the pinup girl tattoo is exactly what you think it is. An image of a beautiful woman standing or sitting seductively looking out at the owner with eyes that scream for attention. However, some people get creative with these tattoos and below are few examples of the different ways you can get this tattoo. Know that the sky is the limit and there are no rules for getting a pinup girl tattoo.

Some people love to show off their affinity for women with a little meat on their bones. A pinup girl isn’t always the same look for everyone and there is definitely a part of society that loves bigger women. Women are beautiful in all shapes and sizes and the people that get a voluptuous pinup girl tattoo is showing that they aren’t ashamed of liking what they like.

We’ve seen many pinup girl tattoos revolve around mechanical ideas. Maybe riding a wrench, using a hammer or sitting on the hood of a car. For people that are into turning wrenches for a living, the pinup girl with tools tattoo is a great option for them. It takes two things that they love and combines them into one cool looking tattoo. This applies for any hobby that you might like. You might see the pinup girl in sports garb or riding a horse. This tattoo is versatile and can be molded into something that fits your personality.

Rosie the Riveter was on a poster during World War II and was rediscovered during the 80’s when she was posted as a strong female figure that represented the strength that women have. This is a tattoo that you will often see on females giving us all proof that it isn’t only men that will get a pinup girl tattoo. In this image, Rosie is flexing her bicep, wearing a blue collared shirt with a red rag on her head. The poster made the cover of the Smithsonian in 1994 with the slogan “We Can Do It!” written above her. This image will go down in history as one of the most well known images to promote feminism.

The pinup girl had an image of a clean, put together woman that was seductive but these days, beauty doesn’t always look like the girl next door. Many love the look of a tattooed woman so they are more likely to get a pinup girl tattoo with the girl having more tattoos than they do. It is just another way to make this woman look a little different and make your pinup girl tattoo a unique image that will get people talking.

This is just another style of pinup girl tattoos. Most of the pinup girl tattoos we have seen are in the style of American traditional or new school. However, some people are big fans of realism and when done properly, these tattoos are breathtaking. Capturing the essence of a woman and her sexuality in a tattoo is not an easy thing to do but when we see one that is done right, we have to take a second look.

The key to getting a good pinup girl tattoo is to make sure the artist you choose is able to tattoo you in the style that you like. The great thing about tattooing these days is that most artists will have their portfolios online for you to look at. So, before you go into a shop and talk to an artist, do a little research to make sure the artist you are going to choose can do what you like. If you need help finding an artist that give you the tattoo of your dreams, let us know. The team at Tattoo SEO has year of experience in setting up customers with the perfect tattoo artist. Happy hunting!