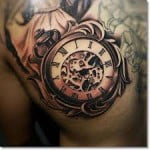 In the nineteenth and twentieth centuries, the pocket watch was a personal timepiece most often carried by men in order to keep time. Pocket watches were often given as special gifts or handed down as heirlooms through the patriarchal line of the family. They made significant presents because they could be designed ornately and made of precious materials such as silver or gold. They were also a symbol of social status, often an accessory of a multiple piece suit, an outfit that portrays a gentleman. The pocket watch has become a central accessory of the steam punk trend and designs are often rendered in the vintage-yet-futuristic style. It is a blend of the past and future which speaks to one who appreciates science fiction.

The pocket watch is of course a symbol of time, the measurement of all action and events by which all significant memories can be recorded. The image of a pocket watch is incredibly personal and serves as a representation of the life of he, or she, who wears it. Because this type of watch was so personal in its time of use, the pocket watch as a symbol can denote many different aspects.

Lewis Carroll’s Alice in Wonderland has served as the basis for many pocket watch tattoo designs that replicate the watch carried by the white rabbit who is infamously always late. The contrast of the timepiece and the rabbit’s continual lateness is emphasized by the usual swiftness of rabbits. In some designs the watch includes a rabbit emblem to designate the white rabbit rather than including an actual rabbit in the design.

If the face of the watch is visible, the time displayed becomes significant to the meaning of the image. More so, the numerals that appear say something as well. Traditionally, roman numerals are used, harkening back to the original time keeper, the sundial. The time could portray any important situation that has occurred, or there could be an absence of hands, denoting a disregard for the passage of time. It can serve as a tribute or memorial tattoo in this way, indicating a time of birth or death or the lack of hands can represent the great sense of loss that is felt by a loved one’s death.

If the watch face is not visible, the significance of the image can be found in the material of which the watch is made. Gold is an obvious symbol of importance or wealth, a richness that is not necessarily monetary. A golden pocket watch can represent the value of one’s own life, a gift in itself. The missing watch face can also indicate a hidden personality, one that has to be opened to be viewed. An emblem or other symbol can be included and made to appear etched into the cover of the pocket watch, revealing only a small part of the individual rather than the entire face. Religious symbols, initials, or words or phrases may be featured on the front of the watch when the clock face does not appear.

The numbers on the clock may be included in the design but not placed on the clock face. Rather, the numerals can circle the pocket watch or be placed haphazardly around the design. This is a representation of madness or chaos, a place where time is not linear or exact. This design reveals an alternate perception of time, or an individual who is not bound by the limitations of space and time. Keeping with this theme, the watch may be distorted or warped in some way or it can be broken. The broken, cracked, or even exploding pocket watch indicates a disregard for time or a shattering of the individual’s perception, emphasizing a time in their life of great change.

Alternatively, the pocket watch can be a symbol of a loyalty to a previous time, before modern technology. The pocket watch, in a more gender specific period, was the symbol of a gentleman. For centuries, the time piece, eventually the pocket watch, conveyed social status or significance until it become easier to manufacture them. After the eighteenth century, they became ubiquitous, and many different types were made to suit various classes and occupations. The pocket watch can delineate loyalty to time as well and symbolize a punctual person. Punctuality is a sign of respect, another code of the gentleman.

Some pocket watch designs show the gears of the clock and represent the inner workings of the individual. Gears and cogs are often a symbol for the mind and its complex processes and they may be used as a representation of intelligence. It can also be a representation of technology and the changing and passing of time. The gears may be rendered within the clock and behind or inside of the watch face designating order or projecting from the clock, designating disorder.

The pocket watch tattoo design can be done in numerous different ways. As mentioned above, these designs can show an incredible amount of symbolism to the person holding the tattoo. For many of us, time is a vital and important thing, it is the one thing in this world and universe that is constant. We look at time as constantly moving forward because that is exactly how us humans and creatures of the human race see things. Every minute, every hour, every day and week we get older and closer to the end of our times. To each individual, time can mean something different. One thing is clear about time however, we all have specific times that we must be getting certain things accomplished. Whether it be to wake up on time for work, or to pick up your kids from a soccer game, the meaning of time is the most relevant thing on this earth. Down below are not only examples of other people’s pocket watch tattoos, but meanings and the symbolism behind them as well.

The pocket watch has been a part of history since it came about. It seemed that when the pocket watch, the actual hand held time telling machine came about, everyone had to have their hands on it. This invention was such a breakthrough because the people did not have to race to a certain area of town to be able to see what time it was, instead, they simply had to reach in their pockets to pull out a miniature clock. Usually these handheld clocks would have some sort of chain attached so that it would make holding onto the clock easier. Not only did it make the clock easier to hold onto, it made it more secure as to not to get lost. The chain would be secured around a belt loop of the pants, or any other area of clothing it could be attached to. This would allow the pocket watch to be caught by the chain in case the watch accidentally slipped from the pocket. Instead of being smashed to the ground or lost, the chain would stop that from happening all together. Although not everyone had a chain for their pocket watch, if you get the pocket watch tattoo, it could add onto the creativity and symbolism of the piece.

When you think of a pocket watch, you normally envision a chain attached to the device. If you are getting a tattoo of a pocket watch, chances are you know a little bit about them already. If you know about pocket watches already, then you already know that the chain is a vital part of the watch. The chain is the security, it is the comfort of knowing that if your watch accidentally falls or someone tries to pickpocket you, that the chain will stop such events from happening. With this being said and in mind, adding a chain to your pocket watch tattoo can symbolize much more than you would think. Adding a chain to the pocket watch design not only shows that you take care of your valuable items, but it says you go that extra step to ensure that your item is safe. It also adds a sense of sophistication to the overall feel of the watch. Instead of having the pocket watch loosely jump around in your pocket, the chain adds that touch of class to saying that you are not going to risk losing such an important piece, it also ensures that the pocket watch does not get completely scratched up from the loose items in its proximity.

Time is a constant reminder that death is just around the corner for all of us. Although it is a grim thought, the tattoo community is filled with images of death. Skeletons and skulls are a popular item to get as a tattoo, for many the reasons they have these can be different. Some say that having skulls and pictures of the grim reaper ward off the evil spirits and that those images are actually beneficial in keeping our spirits protected. Whether you believe this or not, the idea behind it is bittersweet. One particular design that you may get for your pocket watch is to incorporate the fact that time is always pushing us to our last breath, and what better way to depict this than with a skull or grim reaper? This idea can be done in many different ways. Having a skull or the reaper inside the watch itself is an option. You could even add skeleton hands, or a scythe, to the watch by using the bones for the hands of the clock. With the image of a skull or reaper on the inside of the watch, it really adds onto the sense that time is precious. Another great idea for a graphic would be to have a skeleton or hooded grim reaper figure holding onto the watch itself. This could express that your time may be up and the reaper is here to take you to your endless slumber.

Swirls are a popular tattoo concept. Spirals and swirls go along perfectly with the idea of time however. This is because of the spiraling effect that time has itself. As we get older we look back on the past and it seems like our memories have spiraled out of control over the years, wondering where time has even gone. Portraying this as a tattoo is a lot easier than it sounds. This graphic can be illustrated in a couple of different ways. One way this can be shown is to have spirals inside of the face of the clock itself. Showing the arms of the clock at whatever time you would like but just beyond that the swirls will form, giving the effect of time spiraling out of control to perhaps take you to a different time and dimension. This of course is an idea popular amongst those who have a love for science fiction. Another way this can be done is to have the watch displayed on top of a spiraling background, maybe the watch is even upside down representing the loss of time. 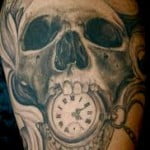 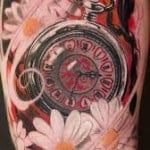 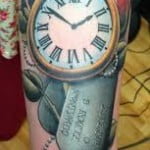 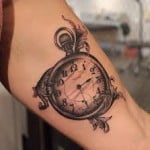 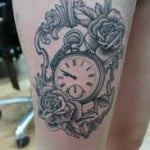 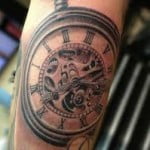