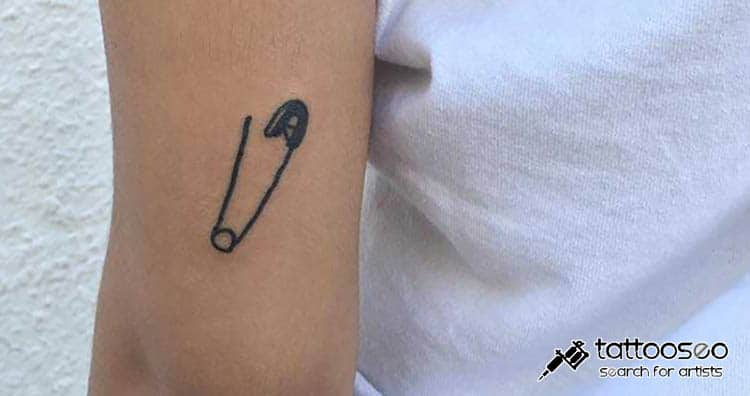 The safety pin, a small pin that is used to hold together and fasten fabric. This is literally all a safety pin was designed to do, so why has it always been some sort of fashion statement? It started out in the 1970’s when the music genre Punk Rock emerged on the scene. In the United Kingdom, many punk rockers looked up to the rock artist Richard Hell. Richard was one of the first rockers to incorporate torn clothing and safety pins to his wardrobe. This statement grew popular amongst musicians and caught the eyes of the band the Sex Pistols. Since the Sex Pistols first debut, they had images of safety pins and wore many safety pins on their clothing, a kind of torn up and tattered ‘I don’t care’ look. Punk rockers being outrageous with a wild sense of fashion started to not only use safety pins as a means of holding your clothes together, they used them to secure patches on their jackets, vests, and pants. The implementation of the safety pin grew into not only a decoration for your clothing, but rockers from all over would use safety pins to pierce their faces and/or ears with and use these as a part of their new-found fad. Ever since then, safety pins have been associated with the punk rock genre/fashion.

As of lately, the safety pin has been making a huge come back in the political world. Since the election of Trump as the president of the United States, members of the L.G.B.T community have been wearing safety pins as a sort of protest against his hate speech. Not only does the L.G.B.T community feel attacked by Trump, but the minorities and women of America do as well as any one that stands up to hate. Those who are opposed to Trump have been decorating their clothing with safety pins as a way of saying ‘we are linked through these pins and we will stand up for the vulnerable as one’. A way of communicating to others that they are an ally and they are there for anyone that needs to reach out.

Even before the punk rock movement and the fashion, the Dutch in the Netherlands during the time of the nazi regime, would wear pins discreetly placed somewhere on themselves. Most often the safety pin was worn under the collar of a shirt. The reason being was to signal those who were being abused by the nazis, that the one wearing the pin was a safe person that you can trust. This caught on throughout the land and it soon became punishable by the nazi law to be seen wearing a safety pin.
Years later, it seems as if we are doing the same thing with Trump in power. Lately those who are seen wearing the safety pin are those who will stand up and fight for someone if they see them being abused or treated unfairly. With the ever-growing popularity of today’s youth getting tatted up, the safety pin is perfect to add to the collection if this is what you stand for.

Sporting the safety pin tattoo does not necessarily mean you have to be a political person, however. The safety pin is a symbol of staying together. It shows you have a lot of integrity and you do not give up so easily. There is also just a cool and old school vibe that goes along with the image of a safety pin.

The image of a safety pin is pretty basic. Since all safety pins have the same look, there are only a few things to keep in mind when coming up with your design. Due to the recent popularity of the safety pin being transferred from our shirts to our skin, different variations and placements should be taken into consideration. Since this is a concept which is being used as a kind of signal to others, it is encouraged to get this tattoo somewhere visible. The safety pin on the side of the hand is one seen frequently. The neck, forearms, wrists, and upper arms are great places to place this graphic.

After deciding on the placement of this piece, you will want to measure the size of the image to fit the appropriate proportions. A tattoo on your wrist for example should be scaled to the size of your wrist and the area you plan on getting inked. The tattoo artist should be able to help you with choosing the right size. When visualizing the safety pin, is it opened exposing the needle, or is it closed and secured? A safety pin that is opened with a droplet of blood at the end of it for example could signify that you are willing to fight the resistance of a corrupt government or willing to fight for those who are being mistreated. The closed safety pin design is just as effective but with a simpler message.

Whether you choose to have your safety pin left open or not, another idea for this concept would be a 3D-like effect. In order to make your safety pin look more realistic and creative, the image of the pin going under your skin and coming back out almost as if the safety pin is pierced on you, gives a real interesting effect.

The image of the safety pin is a silent revolt and signal to others. People who are aware of this signal know that they are in good company when they see the graphic of the safety pin. For those who may ask what your safety pin tattoo means, explaining to them the silent signal is not only spreading the knowledge, but killing the fascism and hate that this world can hold. The safety pin shows strong signs of unity and resistance against a corrupt government. The safety pin idea proves that tattoos can unite us and that we are able to have our say in politics without shouting our beliefs in each other’s faces.