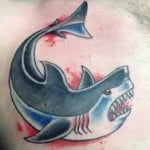 Anyone looking for a menacing and often very meaningful animal tattoo design should look into getting a shark tattoo. Not only do these animals look amazing on the skin, they you’ll also find that there are quite a few shark tattoo meanings that people like to use. Below you will find out why so many people choose to get shark tattoos and some of the more popular meanings that are used with them.

For centuries, sharks have been part of many Polynesian mythologies as gods and goddesses featured in popular tales. In Hawaii, there are multiple shark deities most of whom preform good acts in order to help humans rather than harm them. Kamohoalii was known for helping guide sailors back to land when they found trouble while Ukupanipo helped control how many fish could be caught by a fisherman. In mythologies from Fiji, Dakuwaqa is a shark god that protected fishermen from the dangers of the sea.

Not so friendly, the Hawaiian shark god Kauhuhu of the island Molokai is supposed to be a vicious, man-eating creature with a bad temper. He demanded the respect of the people who lived on the island lest he unleash a throng of dragons who served as his guardians. Even in this tale, the shark itself is not the greatest threat.

Shark imagery is incredibly significant to Polynesian beliefs and mythologies, specifically in Hawaii. Although the mythologies tell of benevolent sharks, the image is still one of a predator that commands to be treated with respect. They are a metaphor for the dangers of the open sea and the unpredictability of the large body of water.

Outside of cultures that have their own shark tattoo meanings, sharks also have inherent meanings that people from all over the world often use. You might find that there is one specific meaning that you want to use with your shark tat, or you might choose to use multiple meanings since they all make sense for you. What’s kind of cool is that you can choose one meaning now and maybe down the line you will realize that another shark meaning works equally as well.

The image of a shark is automatically terrifying as sharks are known as vicious, hungry killers. While this is true, their predatory skills are set on devouring fish and other sea creatures, rather than humans. Still, people usually want their sharks to look a bit terrifying, both because the image usually looks better in this way and it says a bit more about the owner of the tattoo.

When placed in a body of water with a shark, the effect is one of utter terror. People usually think of the famous movie Jaws, which has a gigantic great white shark seeking out any humans that came into its territory. While some shark designs do show a shark simply swimming around with its fin poking up above the water, you’ll find that most people opt to get the sharks head popping up over the water with its sharp teeth flashing and angry look on its face.

The shark as symbol, therefore, is one of warning and peril. People who use these shark tattoo meanings are saying that they could snap at any moment if provoked. The meaning also could be that the owner of the tattoo does not like when other people invade their space. The shark serves as a warning that the owner has the tendency to “bite” with no warning.

Although they are efficient killing machines, sharks swim through the water with precision and grace, hunting to survive and thrive in the ocean. You might not think it when looking at a shark tattoo, but it absolutely can represent grace. This could mean that the owner of the shark tattoo takes pride in being meticulous in everything they do or they have been told that they are charming and they are proud of that trait.

One very interesting shark tattoo meaning is curiosity. Believe it or not, sharks do not roam around the water looking to kill everything in their path. Instead, they are scoping out everything around them to make sure that they are safe and, yes, to hunt down some food. Sharks have an unbelievable sense of smell, excellent vision, and they can even detect the electrical impulses that fish and animals give off under water. If you take pride in being a curious person, then you might find that the shark is the perfect tattoo to show off that characteristic.

A very popular shark tattoo meaning that plenty of people use is fearlessness. The fact is that sharks do not back down from anything, even when their odds of survival are low. They will attack when they have to, and they will even take on multiple enemies at once. This is a fantastic shark tattoo meaning for people who are fearless or those who have set a goal to be more fearless. Unsurprisingly, a lot of people choose this meaning since most people fall into one or both of those categories.

Intelligence is yet another shark tattoo meaning that anyone can use. As we pointed out earlier, sharks use all of their senses to the fullest, which allows them to fully trust their instincts. They are not the types of animals that regularly find themselves in dangerous situations since they have done all of that hard work of scoping out their surroundings. If you wanted to get a tattoo to symbolize your intelligence but don’t want to use one of the more common options, then definitely look into getting a shark tattoo. Just be warned that many people will not recognize this shark tattoo meaning when they first see it so you might need to explain it to them.

If you plan on getting a shark tat, then you will want to choose a shark tattoo meaning or two and you will want to come up with a cool design. Designing a shark tat is easy if you copy the image directly out of a book or off of the internet, but many people want a unique image in their design. If you want a unique design, you will want to hire an artist who either has experience drawing sharks or who has the skills to take an existing image and tweak it to make it unique. If you’re really lucky, you might have a tattoo artist who can both design the image and put it onto your skin.

Unless you are getting a tiny shark symbol tattoo, you should expect to pay quite a bit of money for these designs. Sharks that have a lot of detail and some water around them take a lot of time to make, so they are going to cost a bit more. Of course, it will be totally worth it if it is meaningful to you and it looks amazing on your skin.

As you can see, each shark tattoo meaning can add even more to a shark design. If one or more of the meanings mentioned above define who you are perfectly, then definitely look into getting a shark tattoo. Just be sure to have a good artist draw it up for you and choose a tattooist who you can trust to make it look amazing on your skin. 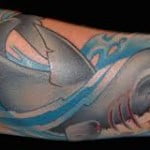 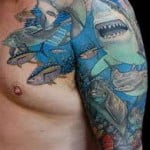 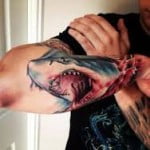 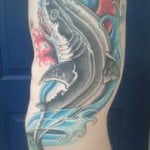 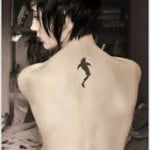 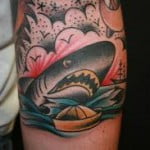 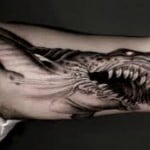 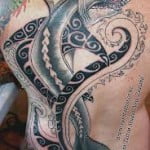 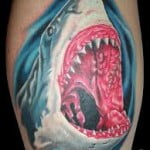 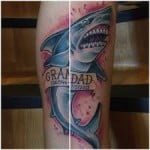 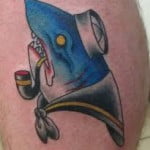 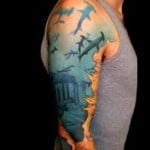 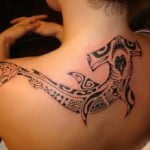 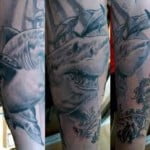