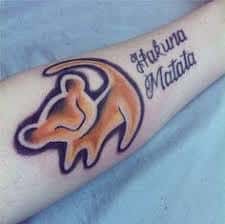 In 1994, The Lion King pulled at the heart strings of adults and kids alike. You would be hard-pressed to find anyone who isn’t a fan of at least one Disney movie. Taken from old fables and stories, many people feel personally connected to Disney films. Many with this specific tattoo are purely motivated by Disney fandom and choose to show their excitement for one of the most successful animated Disney movies ever made by getting a tattoo. However, there is also a significant group that is purely inspired by the meaning behind the lion or lion cub. The lion, as its own symbol, represents strength, courage, pride, wisdom, protection, etc., which can inspire an unlimited number of personal meanings to each and every individual.

There are many ways get the Simba symbol tattooed on your body. These memorable images can range from obvious reference to the Disney movie character to profiles hidden within a larger design to an outline containing specific imagery relating to the owner’s vision. There are versions of Simba from young to old, or even the simplistic, minimal trace Rafiki makes in a tortoise shell with tree fruit juice.

There are many reasons and specific meanings to the Simba tattoo and it hits home for fans of the movie. Though the image of Simba can be attributed to many different meanings, The Lion King holds special significance with its African heritage. If you watch the movie again and keep your ears attuned to many background sounds, you may catch the African tones in the music.

The most obvious and common reference of the Simba tattoo is Disney’s The Lion King. This clearly holds the largest significance for this tattoo in many different life lessons and circumstances. The Simba tattoo can be coupled with a number of characters from the widely regarded animated film. Rafiki’s simple outlined portrait is often paired with quotes from the animated Disney film, such as “remember who you are” or “You got to put your past behind you”. This is generally attributed to the idea that one always learns from his mistakes and seeks to prevent them in the future.

There are other quotes in the movie that are also popular choices to be tattooed. Lyrics from “The Circle of Life,” and “Hakuna Matata” (meaning “no worries” in Swahili) are some of the more notable choices. Incidentally, many Simba tattoos include Timon and Pumba character imagery to solidify the “Hakuna Matata” message.

We’ve also seen Simba tattooed in a style where his stages of growth are inked in the way someone might tattoo the phases of the moon. Simba went from being a youngster who couldn’t protect himself or his friends, to the ruler of the kingdom. Some may claim that his becoming king was the important part of the movie, but you can’t miss his journey to becoming king. This story coincides with growing up. From being a child, to our teen years, all the way to adulthood, there are many lessons learned along the way. Simba had to leave his kingdom before he learned where his rightful place was. The Simba tattoo can symbolize the physical and emotional growth one is bound to work through on their way to being the man or woman they were meant to be.

The inked imagery of Simba and his father, Mufasa, can also hold significant meaning, indicating the bond between father and son and many people can relate to that. Based on the animated film, Mufasa dies while Simba is very young. This is a really important part of the movie and touches many people. Outside the obvious bond between a father and son, other tattoo enthusiasts might connect with the idea of the character in a non-perfect family dynamic. In addition, one might connect with the idea of dealing with family tragedies or even a lack of relationship. Though not common in tattoos, the two lions together can symbolize east meeting west; sunrise and sunset; two planes meeting at one point; ying versus yang, indicating understanding and acceptance of all different types.

Completely aside from the Disney association, the lion is also universally a symbol for the zodiac sign, Leo. With attributed positive, warm, and energetic qualities, this symbol can hold serious meaning to all. These people that were born under the astrological sign of Leo may also love the movie which gives them an even closer affiliation to the movie.

Another large theme with Simba tattoos is love. Known to be a reference to Shakespeare’s tragedy Hamlet, Nala is considered to be The Lion King’s equivalent of Hamlet’s love interest Ophelia. As the key character and love interest of Simba, Nala can present a significant symbol of true love. Not only does the friendship and close bond strike a chord with many fans but the basic concept of young, true love strikes a chord with many people. This is especially true when used as a matching tattoo. Simba can often be found as a matching tattoo for a significant other with a Nala counterpart.

A Simba tattoo is often done in color but when displayed as the simplistic drawing by Rafiki, tends to be done in black ink. This isn’t a must because the Simba tattoo can be inked in any color, however, we do see many of the Rafiki drawings of Simba done in black and grey.

Whether you’re a Disney fan, an optimist, someone looking for inspiration or hope, someone looking for the perfect symbol to display strength and courage, the Simba tattoo has incredibly significant meaning. This movie was giant hit and resonated with most people who watched it. If this movie resonated with you and you planned on getting a Simba tattoo, we hope the article helped in your decision. The symbolism behind the Simba tattoo will be different for all but there is an overall positive message.

If the perfect tattoo artist has alluded you throughout the years, let the us help you find them. We offer recommendations to folk looking for the right shop or artist.