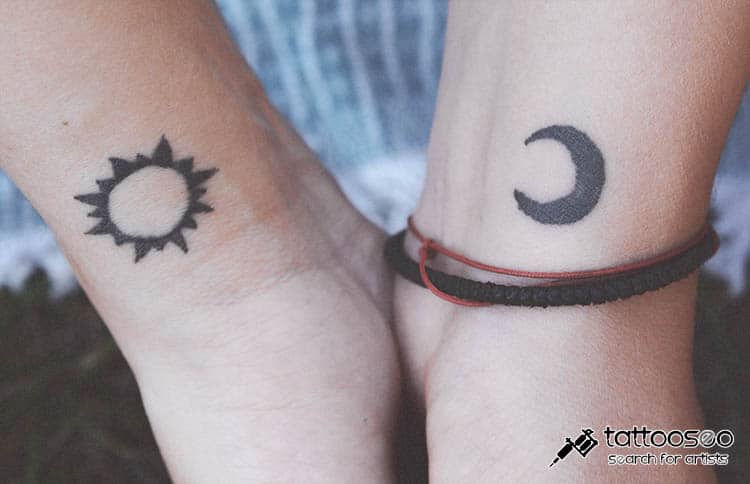 The sun and moon are very powerful in imagery and symbolism. You will see these markings all over the world. From Ancient Egypt to modern day United States, the sun and moon symbol carry a great deal of meaning. When an image is so powerful and holds so much meaning, it wouldn’t be a surprise that many would choose to have these images tattooed on the body.

The sun and moon tattoo happens to be a very popular one amongst those that follow the beliefs of yin and yang. They are very powerful opposites and depending on where you find these symbols, will have some sort of symbolism in this area. Different cultures will have different sets of rules regarding any symbol. However, we feel like the sun and moon have a pretty similar meaning everywhere.

In this post we will talk about the sun and moon tattoo and what it symbolizes. What it symbolizes and what it means to the person wearing it can be two different things, so we will talk about some variations of the tattoo as well. We hope that by the end of the post you have a better understanding of the relationship between the two and that you feel better about going in to get your very own sun and moon tattoo.

Relationship Between Sun and Moon

Many of us believe the tide effects humans and the Earth alike. The tide rises at the height of the day while it regresses at night because of the moon’s gravity pulling at the Earth.

You can get the picture that sun and the moon have an impact on the Earth and us as humans. With such powerful pull both ways, there is a certain balance we have to appreciate.

The sun and moon tattoo are ones that will stand the test of time. This tattoo is timeless, and you should not have any concerns about this one going out of style. People of all over the world, no matter your beliefs or what you look like, experience the same hardships. We all have our light side and our dark side. That said, the sun and moon tattoo speaks to many people on this level. You will find a great deal of meaning based on the sun and moon tattoo design. Many times, you will see the sun and moon together as one. A circle involving half moon and half sun. The sun is usually associated with strength, rebirth and power while the moon is representative of the feminine and many times in the form of a goddess. You could call it the modern-day yin yang.

The sun and the moon go hand in hand and they really fit with each other. To understand this, we should talk a little bit about what each symbol means on its own.

The sun tattoo can be said to represent truth and light. The sun can also represent a rebirth. Coming out of the darkness into the light. The sun can also symbolize vitality and energy. These are common themes in life and the sun is a great way to represent that feeling. On the other hand, the moon can symbolize different ideas depending on the depiction of the image. In general, the moon is a feminine symbol representing the passage of time, eternity and the dark side of things. The dark side of things can be nature or your state in life.

They are the union of opposites. The sun being the masculine while the moon being the feminine and representing a calm. The sun and moon tattoo also represents life in general. When there is good, there is usually bad as well. Where there is darkness, there is light. There is no one way things are done. There is always a reaction with every action. Do you see the theme? The sun and moon tattoo represent all that we are. We have to remember that we have to have balance in this life and sometimes we need a reminder of that. Together, these tattoos make some powerful imagery that can help get us through rough times. In addition, these two images just seem to fit together.

When getting your sun and moon tattoo, know there are numerous ways to get this done. There are different variations of the sun and moon and depending on how they are put together, you might get a slightly different meaning. However, everything revolves around the idea of being complete. Below are some variations that we’ve seen over the years and what they mean to the people that have them.

The sun and moon tattoo where the two images are combined really grab the essence of the yin yang symbol. When you get this tattoo, you are getting a symbol of both sides of the world. This symbol brings balance and for those with this tattoo on their body, they are trying to invoke some of that balance in their life. Whether it is work, relationships or family, balance is important, and this tattoo represents the struggle.

Sun and Moon matching tattoos are a great way for best friends to show their allegiance to one another. Whether you are best friends looking for a tattoo or husband and wife, the sun and moon tattoo speaks of completion. You aren’t whole without your other half and this symbol represents that. It is also just a cool looking tattoo so when someone sees your matching sun and moon tattoos, they are bound to ask questions. It’s at this point you can explain the connection you have with the other.

Much of the symbolism behind this tattoo will depend on what phase of the tattoo you have tattooed on your body. The sun is the sun. It looks the same and represents specific traits. However, the moon has different traits depending on what phase it is in. From the new moon to the full moon, the phases represents the timeline of life and when packaged with the sun, you can have a tattoo with a totally different meaning.

When you are ready to get your sun and moon tattoo, make sure you do your research and figure out the message you’re trying to convey. After you have the idea, find an artist that you feel comfortable with and if you’re not sure, sit down and have a consultation. Any artist worth their salt will sit down with you and talk about your tattoo. If you need help finding and artist, just ask us and we’d be happy to help.