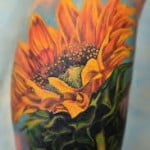 If you are looking for a flower to represent your characteristics or trait in a tattoo, you have a lot to choose from. Some of the more popular floral tattoos include the rose, lilac, lily and carnation to name a few and all of them are packed full of meaning. However, we aren’t here today to talk about those symbols. Instead, you are here because you are wondering what the sunflower tattoo means and that is a good question. Knowing that all flowers have some sort of symbolism, if you are going to get the sunflower tattoo, it will be important to know what it means to have this tattoo.

The sunflower is a beautiful flower and from the looks of it, most people will figure that this flower has a lot of meaning. This flower is identified by it’s large stalks and giant flowers. We probably also know about the seeds that it produces that we eat but this flower isn’t just here to provide nutrients, it is a very symbolic flower.

The sunflower (Helianthus, Greek for sun flower) is a tall, thick-stalked flowering plant with large, bright yellow petals and smaller, darker petals in the center. One of the most popular and well-known flowers, they are indigenous to North and South America, but most commonly found in North America. They are popular for their tall stature, hardy roots and stalks, and the edible kernels that are often called seeds. A bright and sunny image, the sunflower is a symbol of summer, a lover of the sun, and a cheery disposition.

In Greek mythology, the sunflower is attributed to a tragic tale of unrequited love between Clytia and the sun god, Helios. Despite the efforts of the nymph Clytia, she could not win over the affections of Helios. Suffering for his love, she watched the sun rise and set every day until she wasted away. It was long believed that the sunflower turned with the rising and setting sun, in French the word for sunflower is tournesol which means “turns to the sun”. Although this is not actually factual, the flower has long been a symbol for sun worshippers. The sunflower is the ultimate image of dedication to the sun, a necessary element in the creation and development of all living things.

They often grow in groups with several flowers together and have become a symbol of loyalty. In tattoo design, because the flowers are so large there are usually only two or three included in a large piece. The thick stalks and wide, deep green leaves are not necessary to clearly render the sunflower as the bright, mustard yellow petals are instantly identifiable. Many sunflower designs utilize the vibrant yellow-orange petals by including the bright color in the tattoo. The color is reminiscent of the sun itself and serves as a representation of life and light being emitted from the flower. Because of this, sunflowers have often been the subject of artists throughout history, such as Vincent van Gogh who has done an entire series involving the flower.

The florets, tiny petals found in the center of the sunflower, are arranged in a very precise way that is appreciated by mathematicians. The florets swirl together into the center and can symbolize an innate and universal harmony and balance that is found in nature. This beauty has led to worshipping of the flower, particularly by the Incas in Western South America who utilized the flower for its seeds and aesthetic appeal.

The sunflower was an important plant in the lives of Southern Native Americans as well and used for multiple purposes. It was a food source, dye, fire fuel, and much more. It has been suggested that the sunflower, worn as a crown, was used by the Aztecs during ritual practice, an emphasis on the significance of the sun. The sunflower is also a figure of regality and high stature, as it towers above all other flowers in the garden. It provides shade for other plants, soaking in the sun, and serves as a means of protection in this way.

Sunflowers, because of their believed dedication to the rays of the sun, are a symbol of longevity and devotion. The loyalty of the sunflower to its relationship with the sun paints the sunflower as an image of warmth, brightness, creation, and happiness. To display this in a tattoo design, the sky and sun can be included in a large sunflower piece, introducing additional bright color. The sunflower is a vivid symbol of nature-lovers and gardeners everywhere.

A sunflower can also designate veganism because of its use by the Vegan Society since the 1940s. It is a symbol of caring and a deep connection with the Earth and all creatures in this sense as the sun is the sustainer of all life. Additionally, the sunflower looks like a sun symbol with bright, yellow rays streaming from the center which leads many to for a design that places the bloom in a field of blue, taking place of the sun. Some tattoo designs include phrases that pertain to the sun, such as “you are my sunshine”, setting the line along the long stem of the sunflower.

Garden-dwelling creatures are often included in sunflower tattoo designs to create a scene rather than a simpler symbol. The scene is a representation of the individual’s personality that finds serenity in nature and the outdoors. These creatures are generally winged, like butterflies, dragonflies, bees, and birds, and have a natural relationship with the flower. This showcases the intricate connections of the Earth’s ecosystems and the reliance each creature and plant have on one another. Wings are also a symbol of freedom and in this case, freedom in the natural world. This world doesn’t concern itself with the pressures of society, rather the individual is liberated from expectations and at peace.

The skull is sometimes used as the center of the sunflower to offer a double meaning. Sometimes it can be taken as a life and death theme where the flower and brightness of the sunflower can be seen as life while the skull is seen as a representation of death. However, sometimes the skull can be symbolic of renewal as everything must die before it is reborn and, in this sense, these two images go together nicely.

On the other hand, you can change the pedals of the sunflower into different shapes or objects like blades, wings, flames or just having the pedals falling off. This will all depend on what your hobbies are or what you are interested in. One specifically that we liked was replacing the pedals for birds that were detaching from the center and flying off into the distance.

Contrary to the belief, the sunflower is a native flower to the Americas. Just like corn, tomatoes and potatoes, these plants didn’t originate in Europe with a slew of other things. It is said that sunflowers were grown in North America going all the way back to 3000 BC. At the time they were used for oil, medicine, dye and food. When the Spanish conquistadors came to the Americas around 1500 the sunflower started being exported to other parts of the world.

Another interesting fact about sunflowers is that Russian royalty brought them home. Peter the Great, a Tsar at the time, was so captivated by the sunflowers he spotted in the Netherlands that he took some back to Russia. They became even more popular in the area when the people of Russia found out that the oils from the sunflower weren’t banned during Lent by the Russian Orthodox Church like other oils. By the time the 19th century came around, Russians were planting over two million acres of sunflowers yearly.

Not only is the sunflower popular in Russia but they started gaining popularity in a new back in North American and other countries when Russian immigrants brought highly developed sunflower seeds in the 19th century that grew significantly larger than previous strains. Later on, sunflower oil was the match that lit the wick to extreme growth in sunflower producing by Missouri farmers in 1946. Things picked up even more when Canada created a machine for crushing sunflower seeds into oil in the 1970’s which also let to more consumers purchasing sunflower oil as a low cholesterol alternative to different animal fats.

The biggest sunflower to exist, to date, was in 2014 and this sunflower grew to be 30 feet and one inch. Hans-Peter Schiffer was the man to beat the Guinness World Record for the tallest sunflower in the world for the third year straight. It required a scaffold and help from the local fire department to get up there and measure this sunflower. 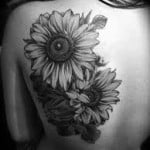 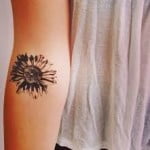 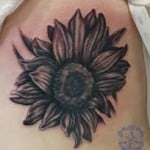 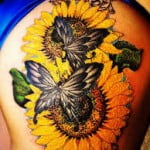 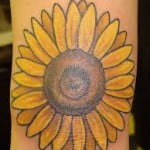