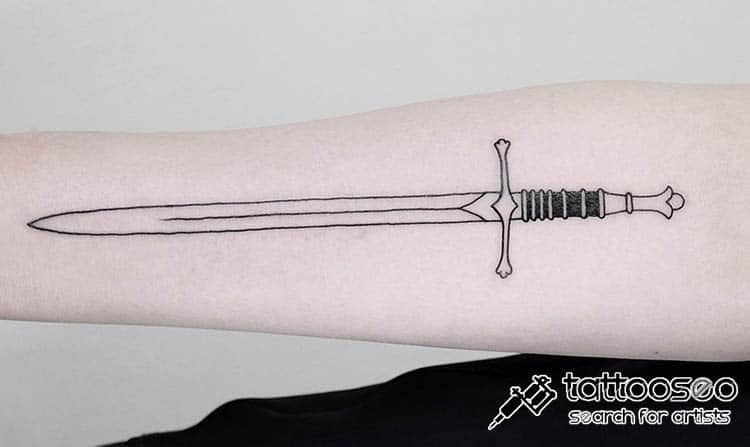 If you are looking for a symbol of strength and power, there are many ways you can go. As far as getting a tattoo of this image, you must make sure it is one you are willing to live with forever. You’ve got lions, tigers and bears… I won’t do it. However, you get what we are saying. There are many different tattoos that symbolize these characteristics.

In this case, we are going to talk about the sword tattoo. The sword has long been a powerful symbol. Swords have been used to conquer and protect for centuries. It was until the more modern years that countries started developing other weapons for these situations. We have watched countless movies where the warrior takes his broadsword and kills all the enemies. We’ve also seen it the other way around. Whatever the case may be, the sword was used to kill the opposition. From samurais to Vikings, many people over the years have used swords.

The sword was a weapon used in combat for defensive and offensive purposes. The sword is a blade with one or two cutting edges and a sharp tip. It is set in a hilt and has a handle. Generally, a sword is protected by a sheath or a metal case. It is said the sword may have been created based off the dagger at the start of the Bronze Age. However, it wasn’t until the Iron Age that the sword was an effective and useful weapon.

Roman and Greek swords were shorter than normal. Their swords had two cutting edges and a point on the end for piercing. The knights of medieval times use a couple different types of swords. One was a heavy two-handed sword with a dull edge. This sword was meant for blunt force while they hand another short, pointed sword for piercing.

During the middle ages, the Arabs in Toledo and Damascus were said to make the best swords. The scimitar was one used by the Arabs and Persians. It was a curved steel sword with a sharp tip. Of all the swords made over the years, the samurais were known to have the best crafted swords. Their swords a single edged, curved sword with tempered steel set in a long handle. The samurais were one with their sword and were known to have blessings etched into them as well.

As far as what the sword symbolizes, there are a few different meanings but most of it revolves around the use of the sword. The sword tattoo represents authority, protection, courage, strength and power. These seem to be obvious meanings as the sword was used for striking down enemies. As far as the metaphysical goes, the sword symbolizes the penetrating strength of the intellect.

The sword tattoo also symbolizes things of a sexual nature. It is a phallic symbol while sheath of the blade is yonic.

There are many sword tattoo variations and the meaning of this tattoo can swing a great deal based on the image with the sword. Below are some of the different variations we have seen over the years.

The sword with the crown tattoo is a representation of royalty and dominance. The king of a castle was known to be a warrior so when coupled together, it symbolizes the power of the throne and everything that comes with it.

The sword and skull tattoo represent death. The sword has taken many lives over the years it has been in existence. By pairing the sword with the skull, the meaning can be taken as a warning sign or of a story. Death falls upon the sword and the tattoo will show that.

The sword with angel wings can mean a few different things. However, the arch angel, Michael, led the angels in a war against the legions of Satan when he was still an angel. Lucifer had rose up and tried to take the throne of the heaven and rebelled against God. Michael was the lead angel on God’s side that struck down the rebellious forces and famously held a sword in all the imagery showing him.

Depending on the type of dragon chosen might make a difference in the meaning of the sword and dragon tattoo. However, dragons have long been a popular subject in tattooing and their symbolism ranges from protection, strength, wisdom, independence, fear, good luck and balance. Many of these meanings coincide with the symbolism from the sword so they seem to be a good pairing.

The sword and snake tattoo can also have many meanings. For starters, both the snake and sword are phallic symbols. In addition, if you add a coiled viper to a sword tattoo, it reinforces the idea of defense, fertility and pride. The snake has a reputation for not messing with you if you leave it alone and the same can be said for a warrior defending his keep.

The flaming sword tattoo is a symbol of Christianity. It is said that when Jesus was crucified and then resurrected, this flaming sword was taken from the Garden of Eden. In doing this, it was possible for humans to enter Paradise once again.