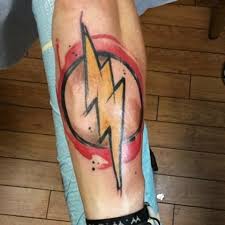 The Flash is one of comic books most notable super hero’s, he is also one of the first created! Dating as far back as the 1940s, the Flash is still a very relevant and ongoing comic book series. As of recently, the Flash has even gotten his own television show on the CW Television Network. The Flash was adopted by DC Comics in 1956, changing the characters name from the ‘Scarlet Speedster’ to ‘The Flash’. Although over the years there have been changes made to the characters name, they all have the same thing in common. They all possess an incredible, super-human ability to run at a super speed, which also includes being able to think and make decisions at incredible timing. His reflexes are also ridiculously fast, and he is able to defy the laws of physics by moving though solid walls and other objects with his ability to manipulate molecular vibrations.

Barry Allen is a forensic scientist who collects, preserves, and analyzes scientific evidence that is needed in the time of an investigation. Forensic scientist such as Barry often go to the crime scene to collect evidence, where they take it back to their lab to conduct research. Forensic scientist testify as expert witnesses when the case is presented to court. Barry Allen was often ridiculed by his piers because of his ‘always late’ and slow, clumsy demeanor. One night while working late in the laboratory during a wild storm, a great lightning bolt crashed through the lab in which Barry was working in. The lightning crash exploded a shelf full of research chemicals above Barry, drenching Barry in a toxic liquid. This resulted in Barry Allen, the sluggish forensic scientist, to gain the abilities to run and think extremely fast.

Due to the agility of the Flash, he quickly learned that with his new super power, he must adapt his clothing to such speeds. This resulted in Barry constructing a suit that could stand the amount of friction he caused by moving so fast. Being a genius, he developed a suit made with materials that are similar to the materials on a space craft that re-enters the earths atmosphere at top speeds. His suit, from head to toe, is a scarlet red with golden lightning bolt symbols and emblems planted through out the suit. Many versions of the Flash’s costume are out there but they all have the same lightning bolt icon embedded on the center of the chest, a bright yellow utility belt accompanies the rest of the costume nicely.

Since the Flash is a super hero coming from a comic book, he and many other super hero’s and villains make for great body art. The vibrant colors used in comic books are so eye catching that a tattoo pertaining to the superhero many adore will be sure to turn heads. The first question is, how far are you willing to take your love for this hero? Full sleeves of the Flash have been spotted as well as simple one image designs, no matter what the size, the Flash always has that dynamic and electrifying affect.

Check out some of these Flash tattoos below for a better idea of some designs.

If you are a fan of the Flash but do not have enough room or just want a simple tattoo design to show your devotion to this hero, the perfect image you could choose is Flash’s signature lightning bolt symbol. Almost all super hero’s have their own self identifying logos, the Flash’s in particular is a jagged lightning bolt striking through the center of a circle. Lightning is such a powerful and impossibly fast force that the lightning bolt is the best symbol to associate with this hero. Also, because a lightning bolt is what infinitely caused him from gaining his powers. This tattoo of Flash’s icon can be incorporated in so many different styles and sizes that it will look good by itself or amongst the rest of your tattoos. You can even take an image and fit that particular image inside the shape of a jagged lightning bolt. This not only combines the frame of the lightning bolt but shows more character and imagery within the simple design. An example of this would be to get the Flash running full speed inside the lightning bolt, giving it a kind of 3D affect, it is a great way to accommodate two ideas into one. The lightning bolt image is a fantastic conversation starter and a very virtuous graphic to have. This tattoo is most commonly seen on the fore arm, upper arm, and chest.

Seeing your idolized super hero’s in action is what it is all about. Spider-Man has his webs, Superman has his cape soaring through the clouds, and the Flash has his insane ability to run faster than the speed of sound. There is always the classic image of the Flash decked out in his costume in the running position. This is a great tattoo, but if desired, it can be tweaked out a little bit to give it more of an edge. In the comic books and television series alike, the Flash runs so fast that he is seen leaving a trail of fire and smoke behind him. This graphic shows the Flash in hot pursuit, full motion and on his way toward some action.

The Flash in Battle

A super hero would not be a super hero if he wasn’t fighting crime. If you are looking for a graphic that not only shows off the Flash’s super human abilities but also shows the hero fighting evil forces, this is an idea you can play around with. Super villains are just as important as the hero’s themselves, after all, if it wasn’t for the bad guys, who would we need protection from? One of the Flash’s main arch enemies in both the comic book and the television series is a deranged psychopath known as ‘Zoom’. Zoom is also known as the Reverse-Flash and Professor Zoom. Just like the Flash, Zoom is also able to run faster than the speed of light, allowing him to cross over to other dimensions in space and time. A battle scene of the Flash and Professor Zoom makes for an incredible body art piece. The vibrant colors and action-packed illustration of these two, almost identical, characters will always be a great comic book style tattoo! 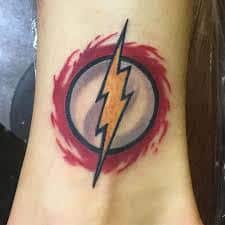 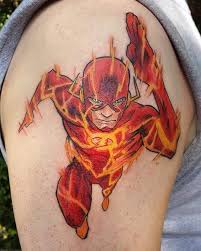 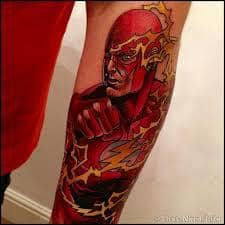 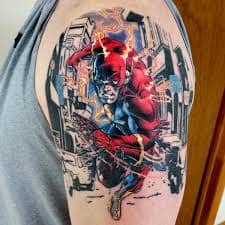 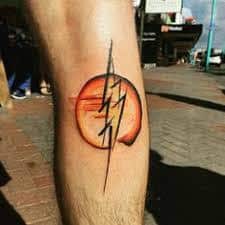 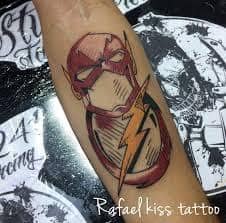 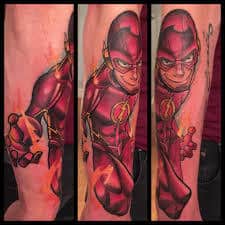 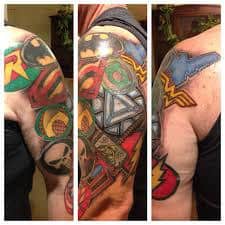 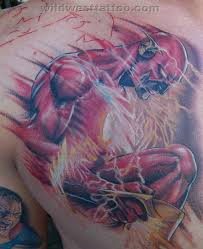 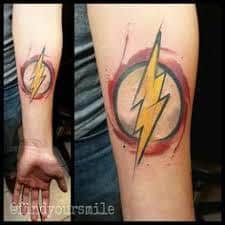 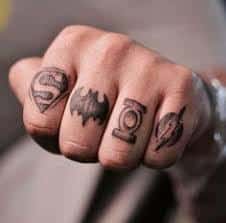 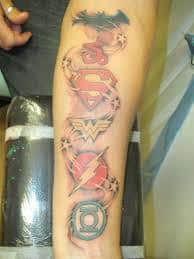 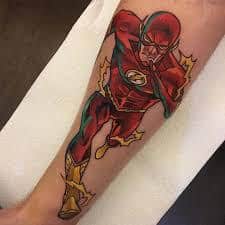 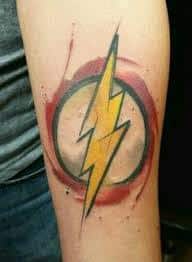 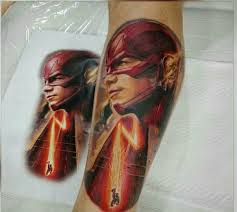 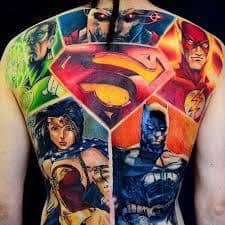 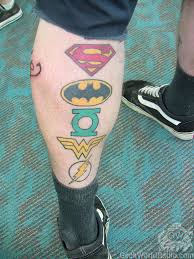 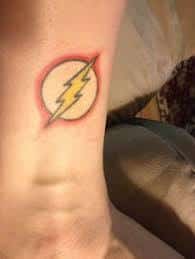 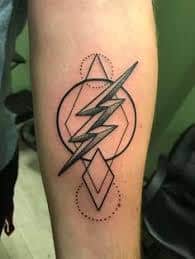 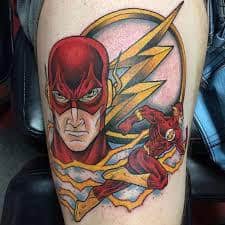 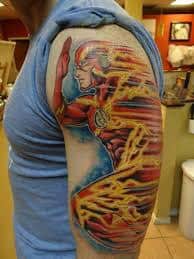 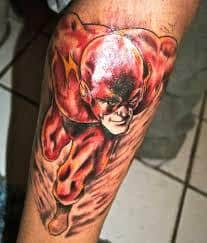 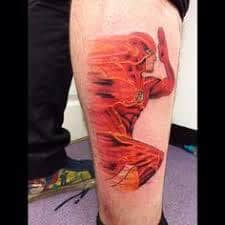