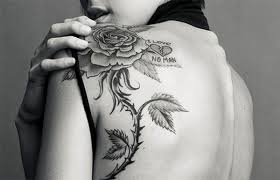 Thorn tattoos often have a very striking appearance, so it’s no surprise that many people assume that they are the types of the tattoos that they are meant more for their looks than their symbolism. Well, the truth is that they have quite a few deep meanings. In fact, the majority of people who get thorn tattoos now think about the meanings first and then design their tats around those meanings.

If the thorn tattoo is one you’re thinking about getting, then it is definitely worth knowing about the most popular meanings attached to it. On this page we will cover some of the most commonly used thorn tattoo meanings as well as some of the ways that you can get these cool tats designed.

The thorn tattoo is one of the best tats to get if you want a symbol of sacrifice. Thorns will usually break when something runs into them, so they are seen as a symbol of sacrifice since they are dying to keep something else from taking damage. This is a great meaning to use if you want to say that you are willing to sacrifice your life for everything that is most important to you.

Protection is another key thorn tattoo meaning since the thorns are there in nature to protect whatever they are attached to. If you take pride in being the person others can count on to take care of them, then this could be the perfect thorn tattoo meaning for you. It’s an excellent meaning to use if you want to get a family tattoo that includes thorns of any kind.

Plenty of people also associate thorns with beauty since they are found on very attractive plants such as roses and vines. What’s great is that anyone who was already planning on getting a rose tattoo can include the thorns, adding in even more meaning to their tattoo.

An interesting thorn tattoo meaning that some people use is pain. It doesn’t necessarily mean that the person likes pain. Rather, it often means that the person wants to remember past pains so they do not make the same mistakes again.

Thorns are also a symbol of honor. You will sometimes see them included in solider tattoos for this reason, though there are plenty of other reasons why someone might want to symbolize honor in their tats. This is definitely a lesser-known meaning, though, so you might need to explain it to people if they haven’t heard about it before.

Unsurprisingly, thorns are sometimes found in religious tattoos, particularly those with Jesus Christ in them. The crown of thorns is a symbol of Jesus’ sacrifice for mankind, so you can be sure that anyone that gets this type of thorn tattoo are very devout.

Once you have figured out one or more thorn tattoo meanings that you like, you’ll want to find a way to design your tattoo in a way that makes those meanings shine through. If you don’t have artistic skills yourself, you can work with a tattoo artist or even an outside artist to ensure that you end up with a design that you love.

Thorn armbands have been very popular for a few decades now. They make a lot of sense, too, since the thorns look like they are attached to the arm, making some of the meanings that much more obvious. One of the other reasons why thorn armbands are so popular is because it is very easy to create a unique design that looks great wrapped around the arm.

The “ripped” or “torn” thorn tattoo is also quite popular these days thanks to the fact that artists have gotten better and better at making them look more realistic. These effects can give these tattoos a more intense and dramatic look while also enhancing the meanings attached to them. Whether this type of design is right for you or not depends on your feelings towards that type of look.

As far as placement goes, most people opt for thorn tattoos that either fully wrap around their arms or legs, or they at least curl around their arms or legs a little bit. This is especially true when the thorns themselves are the centerpiece of the design. In designs that have the thorns wrapping around another object, then the tattoo could be placed just about anywhere.

Is the Thorn Tattoo Right for You?

After reading all of that, it should be clear why so many people opt to get thorn tattoos over all of the other options that are out there. They can look great if they are created by good artists, and they hold meanings that work for just about everyone. It’s no surprise that they have been some of the top selling tattoos over the last 20 or so years.

The one thing that can keep some people from getting thorn tattoos has everything to do with the look of the tats than the meanings associated with them. The fact is that many people simply don’t like the look of thorns, especially when they aren’t attached to roses or other plants. You’ll very rarely hear anyone say that they passed on a thorn tattoo because of the meanings. If you don’t like the look of them or you simply don’t think you can come up with a way to make one of these tats work on your body, you should find another design that uses the meanings that you like.

If you have thought of a thorn tattoo design that you like and you have one or more meanings that can work well with it, then you should find an artist in your neck of the woods that can make that design a reality. People rarely regret getting thorn tats since they are the types of designs that will still be in fashion for decades to come and their symbolism will always mean a lot to the people who have them.