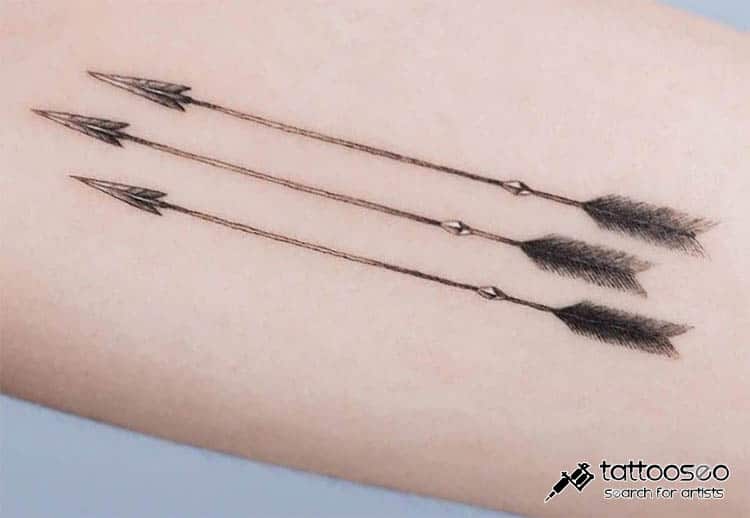 An incredibly simple and yet versatile tattoo design, the three arrows can be rendered in a number of ways and hold countless meanings to the one who receives it. The simple design can be chosen simply for aesthetic appeal or for a complex reason that is very personal. The design can be sacred or solely a representation of art and appearance. The three arrows may be designed facing up or down, north, south, east, or west to denote a specific direction, stacked in a vertical line or a placed in a horizontal line. These minute differences in design create difference significance for each direction. Most generally, three arrow tattoos are done simply and delicately and placed in a small area of the body like the wrist, fingers, behind the ears, or anywhere else the individual choses.

Arrows may be rendered as minute “V” shapes that can be done in any thickness or thinness. This simple symbol is a representation of movement and direction, especially when the arrows are all pointing in the same direction. It can be used as a reminder of motivation and forward thinking. If the arrows point in different directions, one away from the body and the others toward the body or vice versa, the symbol can be a reminder of the past as well as the future. It can indicate a significant event that occurred and the strength to move away from it.

The arrows may be done more complexly and made to represent the arrows used by an archer and include an arrow head on one end and feathers tied to the opposite end. They may be tied together in a bundle or could even feature a quiver in a larger and more elaborate design. When the arrows are tied together with rope or placed in a quiver it symbolizes family or friendship. The object holding the arrows together represents a bond and connection while the arrows represent each member with the relationship. Each arrow could also symbolize a family unit to convey a larger family without having to include more than three arrows so that the number three is incorporated into the design.

The significance of three is the foundation that it represents. The triangle, made of three points and representative of the shape of the arrow, is an innate shape within nature and symbolizes life itself. The arrows combined with the concept of the power of three creates an image of strength and offers a sense of spirituality, a connectedness with nature.

When used as a Native American symbol, the three arrows tattoo can have quite a few different meanings. It can have classic meanings having to do with hunting and providing, or the tattoo can have a much more personal meaning. When someone gets a Native American version of the three arrows tattoo, it will almost always have classic arrows with feathers on the ends. The arrowheads are often rendered as chipped stone to emphasize a hand-made quality. The arrow itself may be a thin stick or twig that has been stripped or may be unfinished. These types of designs may include color or additional triangular shapes to represent tipis, a symbol of a community.

To emphasize the concept of hunting and providing, bows may be used with the arrows, either one bow for each arrow or one bow with a quiver of arrows. These designs are popular with hunters or those who live off of the land and highlights their prowess as a survivalist. There may also be a stag, deer, or other game tattoo to complement the arrow tattoos.

Legend of the Three Arrows

A rarer three arrows tattoo meaning has to do with a famous 16th century Japanese leader named Mōri Motonari. The legend goes that he gave each of his three sons an arrow and asked them to break them, which they did. He then asked them to break three other arrows at the same time, which they couldn’t. This demonstration was done to show his sons that together they were stronger than on their own. In this way, the three arrows tattoo can represent the strength of family or any other group of people.

Some designs utilize the line of the arrows as a format for inspirational words. A script is used, often connected to the stem of the arrow and placed in between the head and the tail, to reveal words or phrases that inspire the individual towards a goal. Words like “faith” and “love” are frequently used as well as phrases that reference arrows, a path, and direction. A geometric-style design works well with the arrowhead and feather features of the arrow tattoo and add an attractive element to the piece.

Since the three arrows tattoo design is so popular, it’s not uncommon for people to get these tattoos for their looks alone. These tattoos don’t have to be large and they don’t take too much time to draw onto the skin, so it’s a pretty popular design when someone wants to get a quick tattoo. In these cases, they will usually just attach a meaning to them later or they’ll stick with just liking the design because it is aesthetically pleasing.

To start to understand the meanings and symbolism behind this image, we must first try to look further into the very object itself; the arrow. The arrow perhaps is one of the oldest tools known to man. Not only is the arrow itself a triangular shape with a sharp point used for penetrating; it has other parts such as the shaft of the arrow and the fletching.

The arrow without the shaft and fletching is still useful in ways, but its purpose is not fully served without the other two parts. When this arrowhead is attached to the shaft, it gives the arrow stability and better form to be launched through the air. At the other end of the shaft that the arrowhead is not on, are what is called the ‘fletching’. The fletching is normally consisted of feathers or a flimsy plastic that further stabilizes the arrow for a steady and precise flight.

Examples of fletching can be seen on basically any arrow and dart. Most often when dealing with arrows however, the fletching will be constructed from bird feathers. The arrow is a hunters tool, mainly it is used to hunt animals with, but it was also used in order to combat enemies to protect land. Although this may all be true, the symbol of the arrow does not have to necessarily be associated with being a hunter.

There are many symbolic meanings behind the image of an arrow, it is up to you to decide on what your arrow, or arrows, mean to you. Down below will be examples of what other people have as arrow tattoos along with placement ideas and the symbolism behind them.

Like any good tattoo, there is meaning and symbolism behind it. Arrow tattoos are very diverse in this sense; the image of an arrow or multiple arrows can make a big difference in what you are trying to portray with your arrows. As we all know, the arrow is a device that was, and still is, used for hunting. The Native Americans were avid bow and arrow hunters, but they not only used the arrow as a mean of providing food/furs for their family and tribe, they would use the arrow as a way of communicating with each other as well.

Two arrows facing in the same direction was used as a code to other Native American tribes, signaling the direction in which war was being fought. It was a signal to both warn and ask for help during times of tribal warfare. Three arrows however was not necessarily a marker for help or war, it is often used as a symbol of friendship amongst three people. Each person getting a three arrow tattoo represents their forever love for each other and unbreakable bond.

A popular tattoo amongst those that are fans of the arrow, is a single arrow. A single arrow can say you are an independent person that strives to push themselves in the right direction. If you want to add more detail onto your piece however, having multiple arrows can strengthen the meaning. Since one arrow by itself can be flimsy and fragile, having a group or a bundle of arrows together makes it a lot tougher to snap since they all form together making a strong bond. Three arrows bundled together can signify that you run with a pack, it says that you have three arrows, if one is broken, there is another two to back it up. Many people get this tattoo as a representation of friendship. The three arrow tattoo can be designed in a number of different ways and styles.

Before you begin to design your three arrows tattoo, there are a couple of details that you should keep in mind. What style of arrows will you use, where will you place these arrows, how will the arrowheads themselves be constructed, the arrangement of the arrows, and what the fletching/shaft of the arrow will be made out of. The most popular and classic illustration of the three arrows usually pertains to the way the Native Americans constructed the arrow. This style consisted of hand made arrowheads usually made from flint or stone. The arrowhead when designed this way should show the ridges and jagged edges of the arrowhead to give it more of the ‘man made’ effect. Arrows such as this have long shafts made from hand carved, sturdy sticks with feather fletching streaming off the end. An arrow such as this is an immediate indicator that these arrows are the ones used by the Native Americans. Not only can this tattoo look cool and have a strong symbolism, it can also represent your culture if you are of Native American descent.

Another important detail you should decide on is how these arrows will be together. Will they be bound together; criss crossing each other in the middle as a meeting point, or will they all be separated? Will the arrows all be facing the same direction or will they be pointing every which way? Lastly, will all of the arrows be designed in the same style?

To help make a clear finalization, the area in which you place this tattoo will also come into play. If you choose a spot on your body that does not have much room on it, such as your wrist or your ankle, you will probably want to choose a more simple design with not as much detail. Choosing to have this piece done with great detail however, it is a wise decision to get this tattoo somewhere you will have a decent amount of room to show off all the traits. The chest is a popular spot to have this design, the upper arm and forearm are great areas as well if you want this tattoo visible to the public.

Color is often added to these tattoos when done with more detail. The three arrow tattoo and any arrow tattoo for that matter looks perfectly fine with just black ink. A little color added to the design can add onto the creativity of the piece, most commonly the color is added to the fletching. Adding color to the feathers for the fletching really brings the tattoo to life and is sure to catch the attention of others.