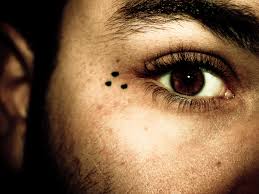 There are many different versions of the three dots tattoo and many different meanings as well, ranging from simple and aesthetic to dark and complicated. The three dots can be arranged in a variety of ways, depending on the intention and can also be colored or shaded in slightly differently to allow for a number of options in design. The three dots, arranged in a triangular shape, can represent a criminal lifestyle alluding to gang membership and serving time in prison. It’s not uncommon to see one person with the three dots tattoo with others that have similar tats. It does not necessarily mean that they are still in gangs, but there is a pretty good chance that they were once part of gangs and proud of it.

The small and simple black dots are often placed on the face between the eye and the temple making it incredibly visible. The placement serves as a representation of the prominence of crime and counterculture in the individual’s life. The reason why it is made so visible is because the owner wants others to know that they live the “hard” life. It is a way to intimidate others both inside of and outside of prison. It’s also a way for fellow gang members to quickly recognize one of their own, which is made much easier by the fact that they have the exact same three dots tattoos on their faces.

The more obvious the placement of the three dots, the more prevalent crime is in the person’s world. Some people will get the three dots tattoo right next to one of their eyes, while others might get the tat on their arm or hand. It all comes down to how easily the owner wants people to recognize their gang affiliation. In some cases, gang members don’t have a choice since everyone in their gang gets the three dots tattoo in the same area.

The dots in the three dots tattoo are a symbol of the Latin American principle of “mi vida loca”, which means “my crazy life” in Spanish, where each dot represents one word. This is one of the many reasons why the three dots are kept so close together. The phrase is commonplace among Central American gangs all over the Americas and the numerous gangs that adopt the “gangster” lifestyle.

The triangularly shaped dots can be placed in other locations on the body but generally are placed in obvious locations, like on the hand or fingers, to emphasize the lifestyle to others. This style of three dot tattoo is often done while incarcerated and is taken quite seriously as a gang symbol. When a gang member does get the three dot tattoo on their hand rather than their face, it could be to keep the tattoo hidden from police while also allowing fellow gang members to see that they are affiliated with them.

Tattoo designs involving three single dots do not necessarily mean that the people are affiliated with a gangster lifestyle, even if placed in triangular form. In some cases, the dots are arranged and tattooed this way simply because of the symmetry of the design. Owners of these tattoos can come up with any number of three dot tattoo meanings since there are plenty of things that use the number three. For example, someone who wants to get a very cheap and private tattoo might get the three dots tattoo to represent three very important moments or people in their lives.

Dots can be rendered in a horizontal or vertical line, straight or diagonal. This is often done just for the minimalist aesthetic and for the simple appearance of the three dots. The dots can be the same size to keep the symmetry or vary in size, color, or shade. There are hundreds of design avenues that you can go down with the three dots tattoo when you’re not getting it as a gang tattoo.

The image of three dots can hold religious significance as well. The number three is often a reference to the Holy Trinity in Christianity and represents the Son, the Father, and the Holy Spirit. Some people will get a religious version of the three dots tattoo that looks exactly like the gangster version, while others might put a lot more space between the dots.

The three dots can be accompanied by a crucifix or other religious iconography to make the intention of the tattoo clear although the additional imagery should be clean and simple so that the three dots are emphasized rather than hidden. Moons or stars work well with the dots to create a minimalist constellation design.

Interestingly, some people combine three dot tattoo meanings to make this tattoo even more personal. It’s not uncommon at all for someone to get a three dot tattoo to represent both their “crazy” side and their religious side. After all, plenty of prisoners find religion while they are behind bars so it makes sense that they would find the three dot tattoo to be the perfect tat for them.

In a literary sense the three dots represent the ellipsis, a grammatical element used to indicate the incompletion of a thought or phrase. The ellipsis alludes to something that is not stated but possibly implied, a sentence that trails off and leaves question. The ellipsis tattoo is a symbol of continuation, a path or journey that leads to something more for better or worse. It represents something that does not necessarily need to be said or written but it better left unsaid.

What’s interesting is that people often think that someone has a three dots tattoo when they actually have the five dots tattoo. These two tats have different meanings, though they can look quite similar. With the five dot tattoo, the owner is trying to show that they are the fifth dot trapped inside of the other four dots, representing their time spent in prison.

When looking at a three dots tattoo, it is important to look at the shape of the dots before coming to any conclusions about the meaning of the tattoo. If the dots are in the shape of a triangle, they could represent any of the things we mentioned above. If they are in a straight line, there’s a pretty good chance that the owner is not in a gang. Because the three dots tattoo can make someone seem like they’re in a gang even though they aren’t, it’s always a good idea to get other designs around the three dots to make the meaning a bit clearer.

You might also find that the three dots were used because they are a cheap and easy tattoo to get. Three friends might get three dots apiece to represent their friendship, though these tattoos are very rarely on the face. These types of cheap tattoos are often done outside of a tattoo parlor since pretty much anyone could make a dot with a needle. We don’t recommend making your own tattoos, but it’s certainly not uncommon.

To go even further, the three dots might represent something very personal to the owner. The dots could represent loved ones or even personal goals. It’s an inexpensive tattoo that can have multiple meanings for the owner and they just wanted anything that could represent those meanings.

That being said, the three dots tattoo is generally seen as a prison tat, especially when it is drawn on the owner’s face. That doesn’t mean you should assume that the person is gang affiliated, but it is the most common meaning.

Obviously you have a lot to think about if you are planning on getting a three dots tattoo. If you don’t want it to be seen as a gang tattoo, it would be best to not get it in a triangular shape and to avoid getting it on or around your face. You can very easily get the three dots to blend in with a bigger design if you really want to have a three dots tattoo.

It’s probably pretty surprising to find out that the three dots tattoo has so many meanings. While it is a tattoo that was once seen as just another gang tattoo, it now has all of the meanings listed above and plenty of others. In all honesty, it’s a tattoo that you’ll want to avoid altogether unless you’re able to find a unique design that won’t confuse people.