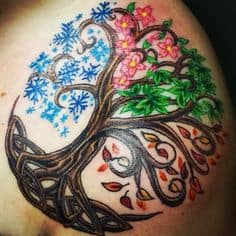 The tree of life is a symbol that is ubiquitous to all cultures of the world. No matter where you go or what types of people you meet, chances are they see the tree of life as an important symbol for humanity. In fact, because the tree of life is universally seen as a strong, positive symbol, some people will simply use that tree of life meaning rather than trying to dig a bit deeper. Of course, there are others with far more specific meanings for the tree of life.

Above all else, the tree of life is a symbol of life and the interconnections of the universe that sustain life. If you are the type of person who sees every human being as equal and connected to everyone in one way or another, this might be the perfect tree of life tattoo meaning for you. If you do use this meaning, you could get your tree of life tattoo designed in such a way that all human beings are special; one way to do this would be to somehow blend the tree with all of the countries around the world.

As a symbol, the tree of life is a very powerful image that connects humanity to the earth that gave it life, asserting the indivisible bond between nature and us. With these tree of life tattoos, it’s important to get a very detailed tree to show how beautiful nature is. You can also mix in some images of people, such as those who are universally respected or even some made up people that make the image pop a bit more. The key is to show that without the tree of life, things would probably fall apart.

Most often, this tree is rendered as tall, full, and deeply rooted in the earth or universe. Unlike other tree tattoos, the tree of life is usually shown with its roots underground. The rest of the design isn’t as important as this detail since you want to make sure the message comes through that without its strong roots, the tree couldn’t stand. There are quite a few great metaphors in there.

In Norse mythology, Yggdrasil is the title of the ash tree that serves as the connection between the nine mythological worlds. Its broad trunk, branches, and roots serve as a pathway for the gods between the heavens, earth, and netherworlds. In Ancient Iran, what eventually leads to Zoroastrianism, the tree of life is call Gaokerena, a haoma tree whose seeds provide the world with life. It also holds healing properties that allowed for the resurrection of the dead as well as immortality.

In Egyptian mythology, the acacia tree brought life to several ancient gods and goddesses, initiating the birth of all else. Additionally, the sycamore tree was said to serve as a connection between the realm of the living and the realm of the dead. In Hinduism, the tree of life is a place of the gods and goddesses that remains unharmed throughout time. Buddha eventually comes to meditate under this banyan tree, at Bodh Gaya where he eventually obtains Enlightenment.

The tree appears in the Abrahamic religions as well, both in the Quran and in the Old Testament. It is a tool used by God to test and reward humanity. The evil part of the tree of “good and evil” is said to have come to life when Adam and Eve ate from it despite being warned by God not to do so. This is an extremely meaningful passage from the Quran and the Bible, so it’s no surprise that plenty of people will use this tree of life tattoo meaning. They often look to it to remind themselves to not be tempted by things that might actually end up hurting them. Of course, they could also get this version of the tattoo simply because that story means so much to them.

Another Christian meaning for the tree of life is the purity of Adam and Eve before the fall of man. Many people want to live pure, wholesome lives and they use this tree of life tattoo meaning to motivate themselves. This version of the tree of life tattoo is often depictured with halos or other religious symbology to make the meaning that much clearer. These are often extremely detailed pieces, so top artists are hired to make sure that nothing is missed and that the tree works with the individual’s body lines.

For obvious reasons, the tree of life can also represent protection. Trees protect us during storms, and many animals will be sure to rush to the closest tree when they need to hide from predators. People who want to show that they take pride in being the protectors of their families might find this tree of life tattoo meaning to be perfect for them. If you decide to use this meaning, you can just get the tree by itself or have it protecting something underneath its branches. Some people even get birds in the tree to add in even more specific tattoo meanings that they like.

Another common tree of life meaning that people use is wisdom. If you are the type of person who is known for showing good judgement and you like to use your experience to help others, then you might find that the tree of life tattoo was made for you. There are many other great wisdom symbols out there, such as the owl, that you can use along with your tree of life tattoo to really bring that meaning home. There is also a very popular tree of life “wisdom” design that is a circular and is often done in simple black ink.

The tree of life holds the wisdom of the universe and portrays the innate knowledge of the earth and the evolution of all life. These are all fantastic tattoo meanings that many people would be proud to wear on their bodies. It is usually advised that people try to find that one meaning in symbols to use, but that is not the case with the tree of life tattoo. Many people will find that they like three or more of the tree of life tattoo meanings and will use them all, often adding in even more imagery to make all of those meanings clearer to outside observers. 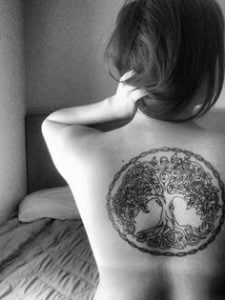 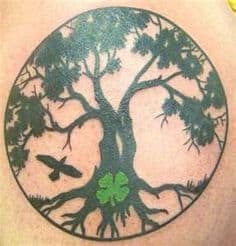 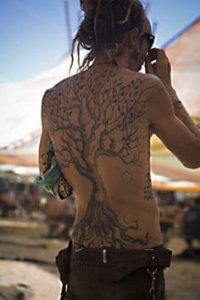 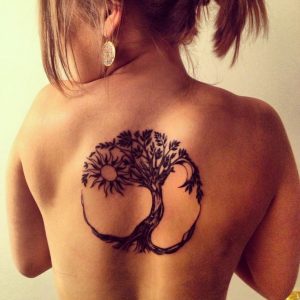 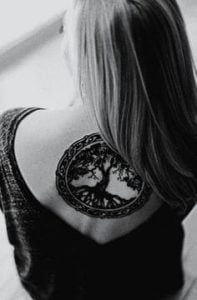 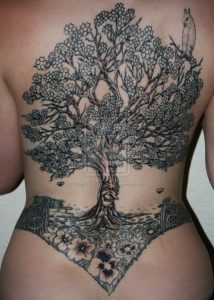 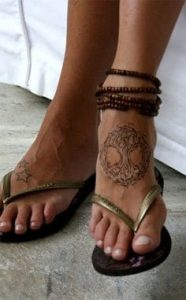 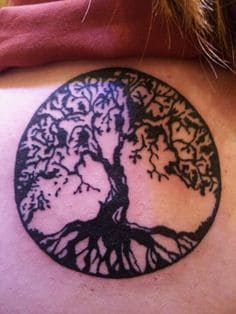 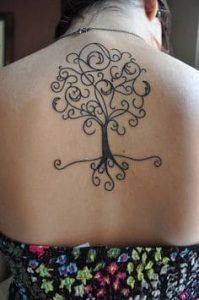 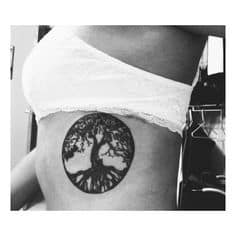 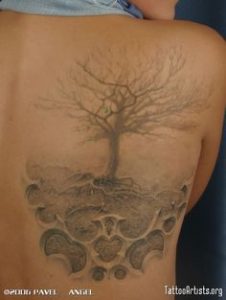 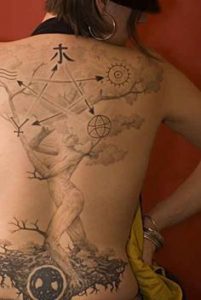 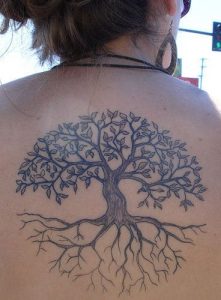 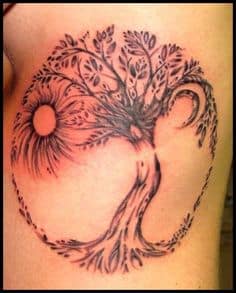 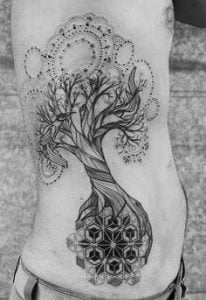 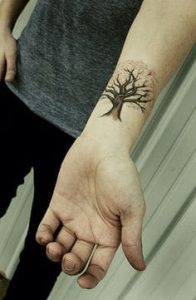 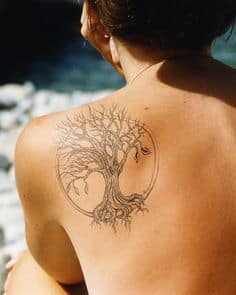 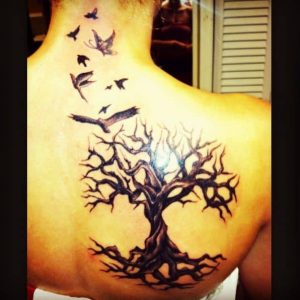 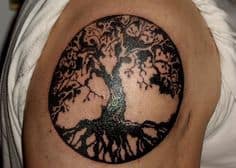 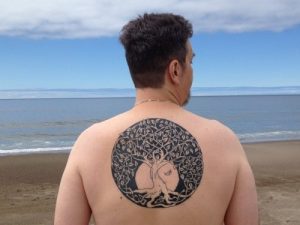 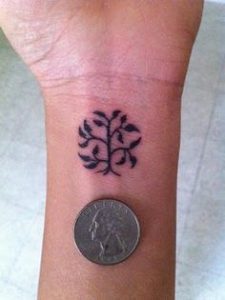 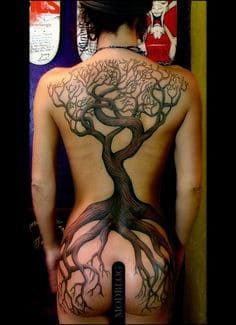 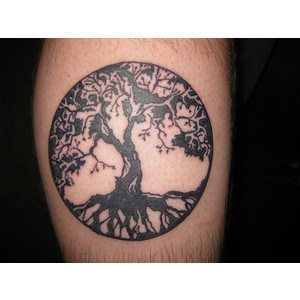 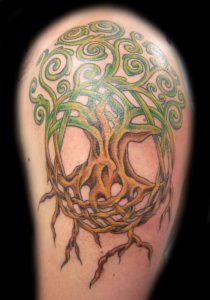 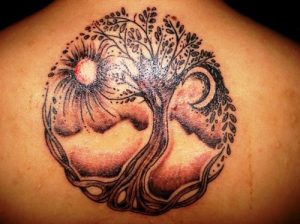 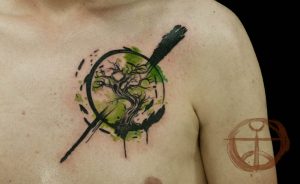 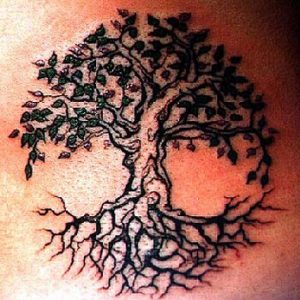 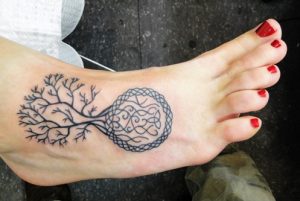