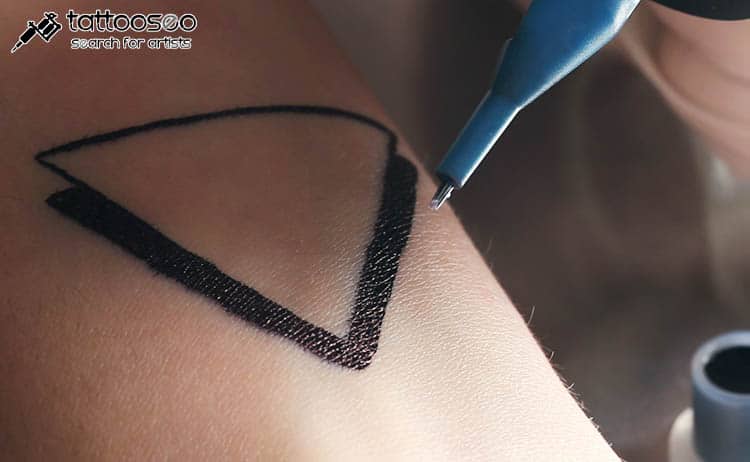 Everything on the planet seems to have its own meaning and this goes down to simple designs like a line. From animals to lyrics, everything has meaning to somebody and shapes are no different. Many shapes like circles, squares and ovals have specific meaning. So, it should be no surprise the triangle is a very symbolic shape as well. So much so that people will get tattoos of a triangle.

The triangle symbol is a simple one, but is also one with a great amount of meaning behind it. Some people will know exactly what type of meaning they will attach to their triangle tattoos, while others just like the look of it. Since the triangle has so many different meanings, owners of the triangle tattoo can find multiple meanings for their designs as time goes by.

The meaning of the triangle can vary based on their orientation. None of the other basic shapes offer this versatility. A square on its side offers the same meaning and a circle, no matter how placed or rotated, is still a circle. While you might find other shapes used a bit more often in tattoo work, triangles are known to hold a lot more meanings than all others.

Due to the fact that triangles contain three corners and three sides they are often linked to different trinities. The most common being that of the Christian faith, the holy trinity- father, son and Holy Ghost. Just as the triquetra has three different points that represent the Holy Trinity, the triangle does too. The triangle can also symbolize the stages of the moon- waxing, waning and full. Other trinities include: mind, body and spirit; mother, father and child; past, present and future; mother, maiden and crone; thought, feeling and emotion and creation, preservation and destruction. Essentially, any part of life that has three parts to it can be likened to the triangle and the triangle tattoo.

Three is a positive number in numerology and the triangle is sometimes used to depict the meaning of the number you are talking about. The number three is said to represent luck. Third time is charm right? The triangle also symbolizes expression and creativity as well as optimism and inspiration. Use the triangle to find your inner creative and let it guide you to creating your own art.

Another Christian symbol incorporating triangles is that of the “Eye of Providence” or the all-seeing eye. This is depicted as an eye inside a triangle and is often surrounded by rays of light. One example of a very popular all-seeing eye is the one found on the one dollar bill. The Eye of Providence is a symbol seen to represent God pays attention to everything we do. Some people will get their triangle tattoo to remind themselves of this no matter where they are in life.

Another way to see the symbolism of this triangle tattoo is the opening of one’s eyes. This might even be the case with our inner eye to greater knowledge. This knowledge transcends the physical being and moves into a state perception that is much higher.

In Celtic culture the triangle is featured in the form of the triquetra, triskelion as well as other trinity based knot work. While this design is traditionally a religious symbol, some people will get this triangle tattoo to show their love for one another. For example, some couples will get matching trinity knot tattoos before they get married. This is especially common in Ireland.

However, the trinity knot is also a pagan symbol and it is a representation of the threefold nature of the Goddess. The three parts are the mother, maiden and the crone. The crone is a symbol of wisdom while the maiden is a symbol of innocence and the mother is a symbol for creation. It is also said the symbol represents the forces of nature which are fire, water and earth.

A popular triangle tattoo right now is the lovers’ triangles tattoo. In this design, one triangle will be blue and will be turned upside down, while the other triangle will be red and will be right-side up. Sometimes just one person will have both tattoos, but some couples decide to share the tattoo by getting just one-half of it each. We have also seen this tattoo inked on very good friends. We all have love for some people that are extremely close to us so this tattoo isn’t just for those that are physically intimate. The lovers’ triangles tattoo is a popular wrist tattoo design, but it can be drawn on pretty much anywhere on the body.

Greeks believe the triangle to be symbolic of a doorway. The thought was that the combination of polarities would provide a new opening or doorway to a higher wisdom. This meaning can be used in multiple triangle tattoo designs. As you might expect, this type of triangle tattoo helps owners find more meaning in their lives.

Mystic teachings also incorporate the power of three when talking about the triangle. Numerologically speaking, one represents force, two represents an opening, and three is the birthing of wisdom. This is also said to represent the union of one and two. People are drawn to this meaning when they get the triangle tattoo because it is one very few tattoo designs that has multiple meanings in its basic form.

If a triangle is positioned pointing upwards it symbolizes the following: masculinity (or male), solar, Shakta, active, up and father. When flipped upside down it represents the feminine (or female), Shakti, passivity, down, mother, lunar and cave. Therefore, the triangle tattoo is most definitely a unisex symbol. Since these meanings are true no matter what the triangle tattoo looks like, men and women can both get triangles but they will often design them to best suit their tastes. Of course, it’s not uncommon for people to get plain triangle tattoos since even those hold plenty of meanings.

A triangle tattoo can also symbolize creativity, harmony, ascension, proportion, manifestation, integration, culmination and change. The most popular of these triangle tattoo meanings is creativity since most people want to be unique and have the ability to do provide something different in their jobs and in their personal lives.

The triangle is also said to represent strength. The triangle is the strongest shape of all the shapes and any weight that is placed on a point is distributed equally amongst all three sides. The triangle, in any form, can represent strength and whether you are wearing it around your neck or have it tattooed on your body, it can be a reminder of how strong you are in body and mind. Sometimes we need this reassurance and the triangle tattoo is a great way to do so.

As you can see, if you plan on getting a triangle tattoo you have plenty of meanings to choose from. This can be seen as both a good and a bad thing, though. Some might be the type of people who want to narrow down the meaning to one that is very personal, while others like the idea of being able to add on meanings down the road. Either way, chances are you will be able to find some type of meaning in a triangle tattoo no matter what type of person you are.

The key is to find an artist that is well versed in fine line tattooing. For the triangle tattoo, the only prerequisite is that the artist has solid linework and make sure its straight. The most simple tattoos can get messed up so they don’t look good. Because they are so simple, a mistake is that much more noticeable. Once you find your artist, sit down with them and have a consultation and make sure you feel comfortable. This is a tattoo you will have for a long time so your time and patience are absolutely worth it.

If you need help finding an artist, let us know. The team from Tattoo SEO has years of experience in making sure our visitors are matched with tattoo artists that will knock their tattoo out of the park. Happy hunting!

Here are some of our favorite triangle tattoo designs.