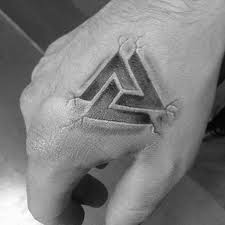 The Valknut tattoo is a great tat idea for anyone who loves Norse mythology, triangles, or who finds that the Valknut holds other meanings that work for them. It may look like a simple symbol that has three interlocked triangles, but it often means so much more than that to those who get the tattoo. On this page we are going to go over some of the reasons why you might want to get a Valknut tattoo, and we’ll will include meanings that come attached to these designs as well as some of the ways that you can create one of these tats should you choose to get one.

Before we go into what the Valknut tattoo meanings and the different types of designs you can get, we should talk about what the symbol actually is. Known as the “knot for those fallen in battle,” the Valknut was long used to honor deceased Viking soldiers. Other than that, the true meanings attached to the Valknut symbol are largely unknown. However, people have given the symbol a bunch of great meanings since that time, which are the meanings that most people use today.

The most common meaning that people do give their Valknut tattoos is the classic one: they are honoring a deceased loved one or friend. This is especially true for people who have lost someone who died in a war since Valknut is largely associated with battles. This is actually a very creative way to honor someone who is lost because you are doing so with a beautiful design that also has more special meanings attached to it.

The Valknut tattoo can also symbolize reincarnation as many people see the interlocking circles as the different dimensions of the world. If you do happen to believe in reincarnation or you simply love the idea of it, then this could be a very cool way of showing it. What’s great about the symbol is that you don’t have to tell people what meaning you’re using and most will have no idea that what it represents. That makes the Valknut a great tattoo to get if you want to keep the meanings private.

Plenty of people will get their Valknut tattoos to show their pride in their Norwegian heritage, especially if they are looking for a smaller symbol to get in tattoo form. In these cases the symbol can be by itself or it can be included with other Norwegian images. It makes more sense to use this as a secondary meaning, but that’s definitely not necessary.

Because there is so much debate over what the Valknut symbol represents, some people will get it to symbolize mystery. As we pointed out earlier, most people will have no idea what the three triangles represent and you don’t have to tell them if you don’t want to. It can have that added benefit of giving putting a mysterious air around you, which is what a lot of people like to get from their tattoo designs.

Of course, you can also get your Valknut tattoo to show that you have a lot of interest in Norse mythology. This is a very good idea for people who don’t want to spend a lot of money on a complex design or those who simply do not want to cover too much of their skin with a Norse tattoo. If you love this type of mythology and you were looking for a cool symbol to put on your skin, we definitely recommend looking into getting a Valknut symbol.

As with all tattoos that have multiple meanings, you can choose to use one of them or you can use more if multiple meanings make sense for you. The best candidates for these tattoos are those who find multiple meanings that they can use, but you might find one that simply makes sense for you and you like the look of the symbol. Of course, you can also combine the Valknut symbol with other images to give a clearer picture of who you are and what’s important to you.

One of the reasons why the Valknut tattoo is still so popular these days is because there are so many ways that you can get the triangles designed. You can get a very large Valknut symbol on your back or you might opt to get a very tiny one on your finger. You can add in some cool details into the triangles, or you might want to get a very basic black outline of the symbol. There are no rules with the Valknut tattoo, so you can be as creative as you want with it and still be able to use any of the meanings that make sense for you.

A great way to add in even more meanings to your Valknut tattoo is by giving it your own customer color scheme. If you didn’t know already, every color in the universe has at least one meaning attached to it. For example, red can represent love, so you might want to make at least part of your Valknut tat red to show that it does symbolize some type of love in your life. You absolutely do not have to do this, though, since most people will actually find that the meanings that are attached to the Valknut symbol are enough for them and they want to keep the tattoo as simple as they can.

We hope you now have a better understanding of what a Valknut tattoo is and why people throughout the world have chosen to get one of these designs. It is a very cool Norse mythology tattoo to get for a number of reasons and you can do a lot of different things with the design to ensure that you have a one of a kind tattoo. If you do plan on getting a Valknut tattoo, we definitely recommend finding a top tattoo artist to make it even if you aren’t getting one of the more complicated designs.