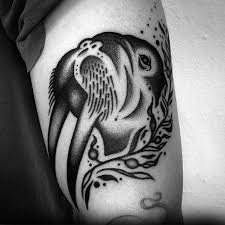 When thinking of an animal that represents the kind of person you are, there are so many to choose from. You’ve got lions, gorillas, elephants, wolves and other powerful animals that you might think represent the kind of person you are. However, not many people choose the walrus, but the walrus is a fantastic member of the animal kingdom with lot of personality and features that make them very likeable. If you are looking for a spirit animal, the walrus is one that many might not take on but it is one you should think about.

If you have become sold on the walrus as you spirit animal or just think they’re cool, you can get a tattoo in honor of this amazing mammal. People might think they are just big lumbering sacks of fat but these sea mammals can move and they large tusks that can do some real damage. This is why many have chosen to get the walrus tattoo. These are the kind of people that respect this animal and understand all the great symbolism behind the image.

Inhabiting the Arctic Ocean and North Pole, the Walrus is a loving and large creature. These giant sea mammals are very easy to recognize with their large tusks that can grow to up to a meter long.

These animals have been a big part of human culture of many civilizations for many years. The civilizations live in the northern parts of the world and used the walrus for meat, fur and ivory. For centuries, the walrus symbolism has stayed pretty consistent so when you get your own walrus tattoo, you will know exactly what it means.

The first characteristic of the walrus that many associate with when getting a tattoo is their calm disposition. These large mammals very rarely attack other animals or people and if they did, it is for good reason. If you happen to stumble upon a walrus with her offspring or come or another animal challenging for their territory, you might encounter an angry walrus. However, when push comes to shove, the walrus is one of the calmer mammals in the animal kingdom and therefore, the walrus tattoo is symbolic of that calmness.

Another meaning behind this tattoo is the protective nature when it comes to their offspring. Now this is quite common with many animals and the walrus is no exception to the rule. If someone wanted to have an animal that represented this trait tattooed on their body, the walrus tattoo would do the trick. They could have easily picked a lion or a bear, but respect those that think outside of the box when getting their tattoos.

They are also very territorial. Like mentioned above, the only other reason you might be attacked by a walrus outside of threatening their offspring would be to infringe on their territory. The generally stay around an area that they’ve chosen to be their home and if an outsider comes into the territory, they better be prepared for a battle.

Other meanings behind the walrus tattoo include social behavior, care, calmness, love and a nature of being compliant. They can be considered gentle giants and are well known for being social so not only can the walrus be imposing, it can also be really fun and friendly.

I Am The Walrus Tattoo

The I Am the Walrus Tattoo is a song written by John Lennon and Paul McCartney on the Magical Mystery Tour album. You might see this tattoo represented in some song lyrics or some sort of walrus but more likely than not, you’ll see this tattoo on a Beatles fan. The song is a wild trip through the imagination of John Lennon. People have tried to pick this song apart years but this might just be an artistic piece made to give you fits if you try to figure out what it is about.

The Wally Walrus Tattoo is tattoo depicting the animated cartoon character named Wally Walrus that appeared in a lot of movies and it was produced by Walter Lantz Productions during the 1940’s and 50’s. He is an anthropomorphic walrus that speaks with a Swedish accent and easily angered a bit of a nitwit. He was seen in many cases as the enemy of Woody Woodpecker in the animated series.

The Walrus and the Carpenter

The Walrus and the Carpenter were two characters from the movie Alice in Wonderland by Disney in 1951. It was originally made for Lewis Carroll’s book named Through the Looking Glass. They were talked about by Tweedle Dee and Tweedle Dum as a story told to Alice. The walrus and the carpenter were two travelers with no job. The Walrus is the leader of the two and uses his wit and mooching to get what he wants. While the carpenter wants to find a job, it is the last thing on the mind of the Walrus. If you are a fan of the show, you might have gotten this tattoo.

Finally, we’ve got a realistic walrus tattoo. When tattooed by an artist with experience in realism tattooing, the walrus tattoo looks amazing and captures the characteristics that we had previously mentioned. Just make sure you use an artist that has some experience in animal realism.