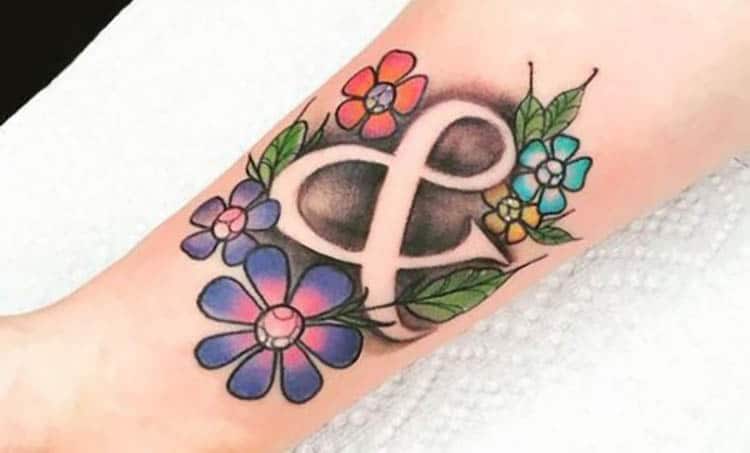 The ampersand is an allusive image that can represent a plethora of significant meanings depending on the intent of the symbol. Above all else, it is a symbol of continuation, an additive relic from the Latin language that is completely inclusive.

The ampersand (&) is a typographical symbol that was created from condensing the Latin word “et” meaning “and”. The “&” is a visual representation of the e and t being squished together. When writing manuscripts, it saved both space on the page and time for the scribe to write an ampersand rather than the scripted “et”. In more modern times, the ampersand has become an element of design that creates more visual interest.

Because of the meaning of the symbol (it is actually called a logogram – a symbol that represents a word), the ampersand is a representation of continuation. The conjunction “and” immediately necessitates an additional clause, or further information, description, narration in order to complete the phrase.

An ampersand is an indication of the future, an expectation for something more to occur. It could represent the ending of a difficult period and the continuation on to a brighter path. While it might seem odd that someone would use these meanings for their ampersand tattoo, it actually works pretty well for most people. We all go through ups and downs throughout our lives, so in that way the ampersand tattoo can represent all of those changes, both good and bad.

Contrarily, the ampersand could convey the prolongation of happiness. In this way, the owner of the ampersand tattoo could be hoping that everything they currently have in life stays the same and continues to make them happy. This could be considered either a tattoo of hope or simply that the person is optimistic about the future.

Additionally, the ampersand could represent a union or partnership, such as friendship or marriage. The ampersand can be a subtle way to indicate that the wearer has a specific attachment to someone, or something, else. When this ampersand tattoo meaning is used, partners will often get the same ampersand on the same location on their bodies. Of course, the tattoo wouldn’t lose any meaning if only one of the two people got the tattoo.

More than just a relationship, the ampersand can stand a symbol for a quest or journey that is seemingly endless, such as an intention to do something without cessation. In this way, the logogram can represent a personal and lifelong passion like art, signing, or anything else significant to the individual. In these cases, the owners will sometimes add another image or two to the tattoo to make the meaning a bit more obvious.

The ampersand can portray a continuous purpose towards knowledge, love, spirituality, anything at all. Because it is such a vague and allusive image, relying on each individual context to explain its significance, it is an incredibly personal symbol and therefore a very personal tattoo design. In these cases, owners will sometimes “hide” the tattoo on their bodies so only they know it’s there. Of course, there are plenty of cases where the owners do want people to know that their tattoos hold these meanings, so they could get their ampersand in a more public location on their bodies.

The ampersand tattoo is also an excellent choice for people who want to show that they have a mysterious side. The ampersand means that there is more to be seen, which might be exactly what the owner wants to express with the tattoo. They basically want other people to know that they should get to know them before they judge them. It’s definitely a unique “mysterious” tattoo that only some people will understand.

Traditionally the ampersand tattoo is a simple black tattoo that can be placed anywhere on the body. However, these days many people choose to be a bit more creative with it. It could be blended with another tattoo design, or it could be more colorful. As with every other type of tattoo design, owners of the ampersand tattoo are encouraged to make it as personal as possible to give it more meaning.

What’s great about ampersand tattoos and ones like it is that they evolve as the owners do. One day they could hold very positive meanings, while the next day they could help the owners get past tough times in their lives. For this reason, the ampersand tattoo is seen as a universal tattoo since it would hold plenty of meaning no matter who got it. There aren’t too many universal tattoo designs out there, which is why the ampersand has continued to be popular for so long.

The ampersand symbol is one that we all have seen but may not have seen as a tattoo. The ampersand symbol is mainly used when two of the same letters are being joined together, in most instances, this symbol is used in the names of businesses. An example of this would be the chocolate candy, M&Ms. Even the cellular company AT&T uses this symbol. There are many, many examples of when this symbol comes into play, but more than anything, this symbol is used as a way of using the word ‘and’ without actually having to type it out. Doing this allows much more space for company names and it helps abbreviate sentences as well. this symbol is one that has been traced back as far as the 1st century A.D. and was used in Old Roman cursive writing. In Old Roman cursive, two letters would often be formed together to kind of make a letter of itself. The letters E and T were often formed together in this form of writing as a way of saying ‘and’. This is known as a ligature. Throughout time, the symbol of ampersand has evolved, eventually giving us the symbol we know today. All three variations of this symbol are still used, just not as often because the final design is the one that is most well recognized throughout different cultures.

This symbol has not only helped the world of literature out immensely, it has found its way into the artistic culture of tattoos. The ampersand symbol is not only a way of connecting words and letters, it can even tell a whole story just by itself. Like every tattoo, each one can hold different meaning to the individual holding onto it. Down below are examples of the ampersand symbol as a tattoo, what it means to others, placement, and other key details to consider when getting a tattoo such as this.

Not only is this one of the most recognized symbols and characters in the world of writing, those who have gotten this image tattooed on themselves have even made up a whole story to go along with it. The ampersand symbol itself indicates that there is more to the story. It shows that there is more to be said on whatever subject you may find it in. In the instance of a tattoo, it can signify life itself. It can say that you have a story to tell and live out and it is not over with just yet. The symbol is a look into the future, it is an indication of ending a certain phase of your life. Whether you just went through some complicated issues or you have emerged victorious on a life-long struggle you have finally overcome, the ampersand symbol can say just that. It is a thought provoking symbol that leaves the individual that sees it in wonder. The symbol as a tattoo is a representation of the various challenges and rewards of the past, present, and continuing future to always strive for a better tomorrow.

Since this symbol is known for converging two different letters to basically form one word, getting matching ampersand symbol tattoos is popular amongst couples. It is a fun thing to do with your loved one if you both are into getting matching tattoos. Since this symbol is one that signifies the converging of two things and represents the continuation of a certain thing, it is perfect for a matching tattoo to show your never ending love for each other. This goes well with friendship tattoos as well. The bond of two people getting ampersand symbols for tattoos shows forever friendship through the good times and bad.

Since this is such a simple design, the ampersand symbol can virtually be tattooed anywhere on your body that you would like. This simple yet powerful symbol can be done in any size, from big, to small, this design is easy to manage. The most popular spot that this symbol as been seen as a tattoo is the wrist. The wrist is the perfect spot for a tattoo such as this considering how it is an easy design and can be viewed by others. Behind the ear is another great, small area where the symbol can fit, as well as the ankles. If you would like this tattoo a little larger but hidden from public view, an ampersand tattoo on the chest is another option. If you would like this tattoo to be visible but easily able to hide and you have longer hair, the back of the neck is another popular area to get this symbol tattooed.

If you would like to add onto the creativity of your ampersand tattoo, throwing a little color into the mix is never a bad idea. Although it looks great with just black ink, many tattoo enthusiasts have gotten this symbol in multiple colors. A rainbow ampersand symbol for example could be very easily done by your tattoo artist. It is a good idea however to ask your tattoo artist which colors would look the best against your skin tone as well as which colors may last longest without fading too much.