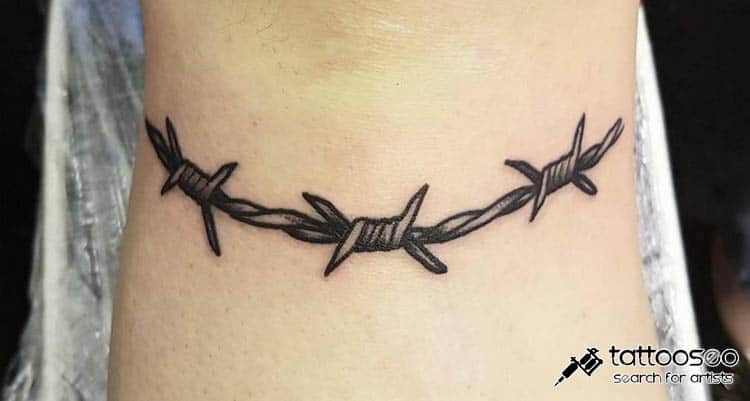 The barbed wire tattoo is one that all tattoo enthusiasts have seen, or at least have seen on television. The barbed wire design is that of an actual barbed wire that you could see at governmental buildings, such as jails, banks, and anywhere else that needs to be protected from the outside. Developed in 1874 by a man named Joseph F. Glidden of Dekalb, Illinois, Joseph was determined to figure out a sure way of keeping his cattle in their perimeter. This was the most efficient and cheapest wire technology for such things in 1874. Since the invention of the ‘barbed wire’ it has been implemented in warfare, and a means of help securing an area that is in need of being under protection. These devices are normally seen on top of walls, chain linked fences, and in times of war, between trenches so that the enemy could not invade those trenches. Needless to say, barbed wire is a device you do not want to be playing around, it also makes for a classic and great tattoo.

This design was most popularized in the 1990’s. Especially when the movie ‘Barb Wire’ in 1996 came out starring Pamela Anderson, Pamela got a tattoo of barbed wire wrapping around her left bicep specifically for that movie. This tattoo has stayed with Pamela making it an iconic piece for the actress ever since. Recently however, Pam has decided to go through the process of getting the tattoo removed after all these years. This should not hinder your decision of having the barbed wire tattoo, as of recently, the barbed wire tattoo design has been coming back in a big way.

If you have a barbed wire tattoo, there could be a number of reasons as to why you have gotten it. Meanings range from religion, to jail time, to even serving in one of the branches of the military. All in all, this barbed wire tattoo can mean something dear to you, or it can just be another random tattoo you throw on. Whatever the reason, this is a tattoo that is very classic and has an old school feel to it. There are many designs for the barbed wire tattoo, down below are some examples of designs and placement.

The symbolism behind the barbed wire tattoo is endless. Most often, people that have this tattoo kind of put off a badass, outsider, vibe. It is a way of saying you are the unapproachable type, not very easily understood. Others get this as a way of signifying there years spent in jail. The barbs on the wire represent each year that said person spent time in jail. It is very popular for a convict to have this tattoo in Russia. It is also worn by those convicts that are spending life in jail. This was mentioned earlier in this article, but this tattoo can also be used to show the religious faith of the individual with the tattoo. Much like the crown of thorns that was placed on Jesus, the arm band of barbed wire is tattooed on the individual as a representation of just that.

Whatever your reasoning for wanting this tattoo, it is a widely known concept and has been making a comeback lately. This is a tattoo that has proven itself of not going out of style. Consider where you would like this inked up and find a tattoo artist you feel would do a good job on this piece. Other popular places to have this tattoo are on the back of the neck, the upper thigh, and the lower half of the leg on the calf.

This is the most common form of this tattoo. The barbed wires are linked together, wrapping all the way around the bicep and arm. This is normally called a ‘tattoo band’. A tattoo band is any form of tattoo that wrapped around the entire arm, giving it that arm band effect. This is a concept that is perfect for the wrap around bicep version of the barbed wire tattoo. Some people get this as a tattoo to represent their faith in their Christian religion. Jesus was placed a upon his head the crown of thorns. Some people get this tattooed around their arm to depict the crown of thorns but with a twist, that crown is made of barbed wire and wrapping around the individual’s bicep.

Just like the bicep wrap around, it is common to get the barbed wire wrapped around your forearm as well. This one however is a little more revealing, so if you are okay with people seeing it easily, this is a great arm band piece to get. With this placement being on the forearm, you can either decide to get just the barbed wire wrapping around once, or you could get the barbed wire circling up your forearm, depending on how big you want to go with this piece. Giving the effect of blood splatter coming from the barbed part, making it look like the wire is digging into the skin. This tattoo can signify that the individual is a tough person.

The wrist is another common place to get this barbed wire tattoo. Giving the effect of a bracelet, this is one that you can not take off. Yet again, customizing the barbed wire is a great idea, especially if you want it in a visible spot to show off. If you are unsure of how this might look, there are many cartoony temporary tattoos of barbed wires to choose from that you can easily apply to your wrist and then decide if you want to get it permanently or not.

Just like the wrist, the ankle is another fine spot to sport this tattoo. This is especially true if you just want a small piece. A tattoo on the ankle such as this, depending on your tattoo artist, should not cost very much money at all. This is a simple, yet provocative tattoo design. Whether you want your barbed wire tattoo to wrap around your whole ankle or not is up to you, but if you are getting this tattoo on the ankle, you may as well go all out, and have it wrap around! It makes for a great effect.