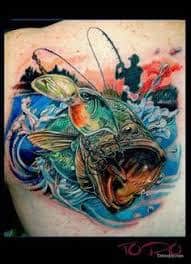 Nothing symbolizes the mighty fisherman more successfully than a bass tattoo. This popular sport fish is and iconic species and is symbolic of the pride and skill it takes to be a fisherman.

To be self-sufficient and be able to hunt or fish for your next mean is the epitome of what a man is supposed to be. When you set that hook, the battle for your next meal begins. Sport fishing is also something that is of interest to the fisherman. To catch and release is also a noble thing. Conservationists appreciate the fisherman as they are part of the process of making sure some fish are thinned out versus others.

For these men, a simple bass mount on the wall doesn’t express their fanaticism for fishing. For those looking to express themselves in a more permanent way, the bass tattoo is a great way to do it. By getting this tattoo, you are letting the world know that you are a fisherman through and through.

In contrast, some fishing enthusiasts identify with this species of fish. In this case, the tattoo might show the bass in a more natural environment. Both symbolic techniques are equally valid!

There are number of different kinds of bass that inhabit our lakes and oceans. Many have similar attributes, but some are unique in their own way. Like the variety of bass in the world, the bass tattoo can represent different traits for the person with this fish tattooed on their body.

When we talk about bass in a general sense, most people would peg the largemouth bass as the one we are talking about. However, there are many species of fish that are called bass. This term includes freshwater and sea fairing fish. The word actually comes from Middle English and means “perch”. The different types of bass include black basses which include most of the bass we know and sport fish like largemouth bass, smallmouth bass and spotted bass. The other types include temperate basses and Asian basses.

When looking to get your bass tattoo, know there are a plethora of ways you can have this inked. Many before you have done and many after you will as well. This is why we wanted to go over a few of the variations of bass tattoo that we have seen over the years and talk about what they mean to the person who has it. By seeing some of these, you might get a better idea of the kind of bass tattoo you want to have on your body. If not, we hope the examples are still entertaining for you.

The largemouth bass is a game fish that resides in freshwater. It’s a species of black bass and is native to North America. The largemouth bass is the state fish of at least five states in the United States as well. The largemouth bass tattoo symbolizes sport fishing to a tee. This fish is one of the most popular fish to try and catch and they put a great fight. Getting this tattoo represents the battle and the respect one has for this specific game fish.

The striped bass is a bit more cultured as it resides from Florida to Nova Scotia. The are also caught as for north as the Hudson Bay. This type of bass is also a very popular sport fish. The striped bass tattoo is another that represents the love for fishing. These bass look cool with their horizontal stripes going from their eyes all the way back to their tails. To catch these fish, all you have to do is throw some kind of food on the hook because they will eat most anything. This includes nightcrawlers, clams, eels, herring, shad and bloodworms for example. Being very similar to the largemouth bass, the tattoo would also be similar with some different aesthetics.

The tribal bass tattoo is another variation of the bass tattoo that looks pretty damn cool. Fishing for food has long been a source of survival and tribal tattoos go back as long as eating fish does. In this way, the tribal bass tattoo represents the most primal of our instincts. Someone with this tattoo has an appreciation for the old days when fishing was important to survival. Not only does it symbolize important, it looks really cool too.

Smallmouth bass are another type of bass that are popular with fisherman. They are usually brown and sometimes appear to be green or black. They have red eyes which give them the look of being evil but they aren’t. These fish are a bit smaller than the largemouth with females ranging from three to six pounds and males only coming in at two pounds.

These are just a few of the different variations of bass tattoos that we have seen. They range from largemouth to smallmouth and can be depicted in so many ways. We talked about tribal a bit, but we’ve seen these fish be tattooed in traditional, new school and realism to name a few. If you are looking to get your own bass tattoo, we’d love to help match you with an artist that can make your vision come true. If you have any questions at all, please let us know.