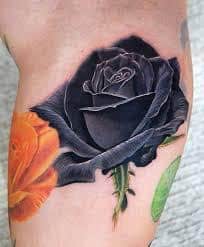 When looking for obscure tattoos, there are a lot of directions one can go in. Everyone tries to be a little bit different from the person next to them and the tattoo enthusiast is already in that genre to begin with. However, if they want to separate themselves even more, they can start looking into unique tattoos that other people with tattoos don’t usually get. The black rose might be one of those tattoos.

The classic rose tattoo has always had something to do with love, so it’s no surprise that some black rose tattoos mean the exact same thing. In these cases, the owner basically got a classic rose tattoo but decided to go with no color. These aren’t necessarily “black roses,” but they are cool designs since they can have a huge list of meanings.

One of the most common reasons why people get the black rose tattoo is when they want to show that there has been a death of a friendship or love. It doesn’t necessarily mean that those people have died, but it could. Sometimes people feel those losses so strongly that they have to give themselves a permanent reminder. As is the case with other black rose tattoo meanings, people who get this tattoo for this reason could change their minds later and still have a meaningful tattoo.

Sometimes people get a black rose tattoo to show off their rebellious side. Considering that the classic rose tattoo is red and colorful, a black rose could be considered the anti-classic. It shows that the person is not all about the pretty things in life, but instead they have a very dark and mysterious side. This version of the tattoo will often have more images surrounding it, including skulls, and other darker imagery.

You might get the black rose tattoo out of revenge or hatred. In old movies, roses were sometimes left on the bodies of the deceased. When this tattoo is had for an enemy, it represents the feeling of revenge and vengeance.

On a more positive note, the black rose tattoo can be representation of strength and courage. The Irish used this symbol to represent resistance and courage when they were fighting the British. There was once a famous political song written in the 16th century called ‘The Little Black Rose’ and it was written as a ballad devoted to the strength and courage exhibited by the Irish during their battles.

Back to the Irish, the black rose was known to represent Irish nationalists. It was once a word that used to describe Ireland when the British weren’t allowing the mention of Ireland being as sovereign nation. It was also used as a symbol for anarchist movements in Ireland outside of just a nationalist meaning.

As you can see, there are plenty of meanings for the black rose tattoo, which is probably why it has become so popular in recent years. It could mean one thing to the owner when they get it, but that meaning could change as they get older. This is one tattoo design that people rarely regret getting since they don’t have to stick with one meaning.

The key for you when getting your black rose tattoo is to find an artist that is experienced in doing floral tattoos. Some might assume that all artist can nail the floral tattoo but this is simply not true. Fortunately, most artists have a portfolio online for people to look at and you don’t have to go into the shop to find the kind of work they do. This saves a ton of time and you can narrow down your search. Once you have an idea of an artist based on their portfolio, give them a call and set up a consultation. The key to the consultation is to make sure you trust and feel comfortable with the tattoo artist. This is a big deal so don’t get the tattoo if you aren’t comfortable with the artist.

If you have been searching and you are still having a hard time finding someone to tattoo your black rose tattoo, let us know. We have years of experience at matching up customers to an artist that will hammer out a beautiful tattoo. Let the team at Tattoo SEO help. We would love to.