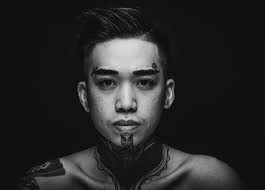 Getting ink on the chin is a concept that has been used throughout history but has recently been making a big come back. Dating back thousands of years ago, the idea of tattooing the chin was not just used as a way of showing off one’s fashion.

In the Arctic regions, such as Alaska, tattoos were done on almost everyone that inhabited the areas. The Inuit people especially practiced the art of tattooing, woman more frequently than men. To the Inuit people of Alaska, tattoos held a strong spiritual connection. They believed that our bodies are simply vessels that harbor many souls, these souls are trapped within the joints of our body. Because these souls are inside of our joints, simple tattoos such as dots and lines would be tattooed on the joints, such as the elbows, shoulders, wrists, knees, and ankles.

The tattoo artists of the time were both men and woman, but mostly woman. The reasoning behind this is the people wanted the tattoo artists to have needle threading skills, in those days, the elderly woman of the area would be best suited for this job since they were great at stitching and sewing. The people back then obviously did not use the ink that we use today for the tattoos. During this time, the tattoo would be done by using a large skin-sewing needle that would be dipped in a combination of seal oil, urine, and the black gunk that would be scraped off from a used pot. From here, the sewing needle would penetrate the part of the skin that was to be inked, a sort of stick and poke style of tattooing.

The chin tattoo was different from many of the other spiritual tattoos the Inuit people obtained. These chin tattoos were predominantly done on woman and although they were a simple design and pattern of lines, the significance of these tattoos on the chin were strong. The chin stripe as it is called, also known as tamlughun, was multiple stripes that ran down the chin. This chin stripe was used as a ritual for girls that have reached maturity. It was a signal to men that the particular woman had reached puberty, this tattoo was also used as a form of protection during enemy raids. Although this practice has been outdated for thousands of years, there are still inuits of Alaska that still hold true to their rituals. They may not use the same ink as they did back then, but the concept of the tattoo on the chin remains the same. This is just an example of how tribes would get tattoos on their face and chin, all these years later, people of different backgrounds and ethnicities still get tattoos on their chins, designs and concepts for a piece such as this are endless. Below are some popular styles that have been spotted on those who have these unique and creative pieces of art.

The most popular, and in many opinions, the best form of chin tattoo would be a tribal design of some sort. As mentioned above, the indigenous tribes of the Atlantic and Alaskan regions, most often the Inuit people, would have tribal tattoos not just on their chins but all over their bodies and face. Although the practice of tattooing a child’s chin to show that they are ready to bare children has died out, the idea that the ink on the chin will help protect oneself from evil spirits is very much alive. The classic ‘chin stripe’ is still being tattooed on many, and in some parts of Alaska, you may be able to find someone who does these tattoos just like they did back in the day. The only difference with these authentic tattoo styles would be the ink would not consist of what they used to use. Instead, the tattoo artist will be more efficient, and the health codes will be more up to date. Not only can you get the stripes running down your chin, you can get other tribal designs of your liking. These tattoos do not have to particularly mean anything but used as a decorative piece of art for the chin. Red ink is used quite often when dealing with the tribal line tattoos, black ink is always another option as well.

Not all chin tattoos have to be displayed right up front. Many people get the ‘under chin’ tattoo as well. This tattoo is a little less noticeable and if you ever need to cover it up with makeup, for whatever reason, this can be an easy one to hide. Especially if you are a male that can grow facial hair such as a beard, this tattoo can be completely hidden if needed. Because of the placement on this one, the pain level might be a little higher than a normal tattoo done somewhere else.

This is because it is directly under the chin where the soft part of where our neck and jawline meet. If you are not afraid of a little pain however, this is a great tattoo that can not only be incorporated with other tattoos, but it gives it a gateway to have your neck covered as well. Designs for under the chin can be pretty much whatever you want. As long as the graphic fits the spot, and is not too stretched out, any image is possible to have done.

Most common tattoos under the chin are a flower of some sort. A rose with thorns, or a black lotus are great examples of what can and will look nice. Adding color to this particularly placed tattoo can really give it a flashy look that can easily be blended in with whatever other tattoos you have around the area. Wording can also be done. The phrase ‘chin up’ is used quite often when getting a tattoo of words under the chin. This is a daily reminder to always look up toward the positive and not to dwell on the negative. Keeping your head held high shows a means of leadership and this is exactly what the phrase ‘chin up’ signifies.