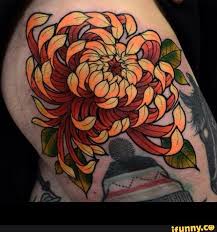 The Chrysanthemum tattoo is a popular one with fans of Asian culture along with tattoo enthusiasts. The Chrysanthemum is one of the most grown flowers in the world. In addition, their popularity has grown so much that “mums” are considered the top dog when it comes to fall flowers. The flowers have been carefully bred by horticulturists to have a variety of shapes, sizes and colors. Today, colors of the chrysanthemum include shades of white, orange, purple, red, pink and yellow.

Understanding how many variations of this flower exists helps us to understand why the chrysanthemum tattoo would be so popular. There is a shape or color for every occasion. In this article, we want to discuss some of the history behind the chrysanthemum and some of the symbolism of this beautiful flower.

The word ‘chrysanthemum’ was derived from a combination of the word ‘anthemon’, which means flower, and the Greek word for gold. Therefore, the chrysanthemum means ‘golden flower’. That says a lot about such a popular flower. You might consider them the gold standard of the floral world. In many cultures, this flower was represented perfection because of it’s noble history.

In addition to it’s connections to the royal family, there is also a national holiday called Chrysanthemum Day in Japan. It is one of the five sacred ancient festivals. They celebrate this day on the 9th day of the 9th month.

In Europe, you might see the chrysanthemum tattoo. Here, the chrysanthemum represents death and is often brought to services to show respect for the dead and grieving. It’s interesting how in different areas of the word, one flower can represent opposite themes.

The chrysanthemum tattoo also represents immortality. This coincides with these flowers being brought to funerals. It represents the people that have passed living on forever. In Italy, they will even put the chrysanthemum petal in glasses of wine to promote a healthy and long life.

In Australia, the flower is meant represent motherhood. In a way to honor mothers, chrysanthemum flowers are given to them on Mother’s Day. Men also wear this flower on their shirts or lapels as a way to honor their mother. Therefore, you might see a man with a chrysanthemum tattoo on them representing their mother. You might also see a woman with the same tattoo for the motherhood symbolism.

These flowers hold a great deal of meaning in China as well. It’s the flower of Kaifeng which is a city in China. The cultivating of this plant goes back 1600 years in China. The city of Kaifeng holds the Kaifeng Chrysanthemum Cultural Festival and they’ve been doing it since 1983. It is the largest of it’s kind in China, so you can see why this plant is a popular symbol there as well.

By the relevance of the chrysanthemum worldwide, we can understand why this specific flower holds so much meaning. It also tells us that a symbol that represents so many ideas in so many different countries, will be a popular choice when it comes to tattooing. What we have gathered is the chrysanthemum tattoo represents many things but most notably, nobility. Because of the rich Asian history of this flower and it being adopted as the symbol for the Imperial Family in Japan, we tend to see this flower tattooed in Asian themes.

We hope that by reading this post, the person looking for more information on the chrysanthemum tattoo has found what they are looking for. If you look around the internet, you are bound to find places where they’ll tell you the chrysanthemum represents different characteristics and traits, however, you will mostly see this flower in an Asian theme.

If you have read this article and are now wanting to go get a tattoo, we hope you find the artist that will fit the bill. If you are not sure about who you want to see, let the team at Tattoo SEO help you out in that department. We are proficient in matching customers with artists so they can work together on a tattoo you will be proud of.