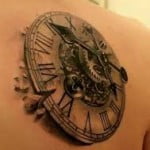 Time has always been something that is of interest to people. We all have a limited amount of time in this world. Everything in our culture is based on time. Be at meetings at a certain time, pick up the kids at a time, get an hour massage and pay for your parking based on time. Everything we do seems to revolve around time so it is no surprise that the object that keeps the time so we know, is a popular subject for tattoos.

The concept of time is important to people for different reasons. It is a very versatile idea so you can imagine that people will use a clock tattoo in some very creative ways. Clocks are talked about in poems, stories and movies as well as impacting our lives daily. The clock is a symbol with a great deal of symbolism and if you are on this page, you are looking for more information on the clock tattoo meaning.

You might be surprised to find out that there isn’t just one clock tattoo meaning, but many. The clock tattoo has been popular for a while now, but there are now hundreds of different designs to choose from and plenty of meanings to use.

In this post we are going to talk about the meaning of the clock tattoo and what it means to the people that get the image tattooed on their bodies. There are also many variations of the clock tattoo as you can be very creative with the image. We will talk about the meaning of some of these different variations and if the imagery changes the meaning. The information provided in this post should help you make a more informed decision about your next tattoo.

The clock most obviously symbolizes the passage of time, which on its own can be a very ambiguous image. Someone who loves history might get a tattoo for this reason, or they could use it as a reminder that time is not infinite. It’s also not uncommon to use this meaning when you want to remind yourself to get the most out of life.

The style of clock must be considered to convey the most appropriate indications for the tattoo. Any type of clock, from a sundial, which could represent an old soul or ancient wisdom, to modern, digital clocks, maybe to show a love of technology and development. They are a representation of time and the age in which it was developed.

Clocks have a long history in human civilization and will represent different meanings, depending on the era. For example, someone could get a clock tattoo that shows a very old timepiece, which could represent that he or she is an old soul. A more modern clock tattoo could either be a part of a larger tattoo design or it could just represent that the owner loves the look of modern pieces.

Additionally, the time portrayed on the clock image is also an important facet as the symbolism will change with various hours and minutes. Perhaps the hands of the clock will not be included and a sense of timelessness is added to the image. The absence of hands indicates a disregard for the passage of time and a carelessness which could have either a positive or negative effect. A timeless clock rendered in a standard, rounded “alarm-clock” style with a bell situated at the top could portray a protest against a highly organized and predictable life.

One clock tattoo meaning that has been used for a long time is “freedom.” Rather than looking at the clock as a reminder that time is fleeting, some people see it as a symbol of liberty. They can do what they want, when they want during every tick of the clock and they want people to know it. When this clock tattoo meaning is used, owners usually decide to leave the clock’s hands out of the image.

If the owner of a clock tattoo does include the clock’s hands, then the time probably has a significant meaning to them. An older model of clock, from a previous age, with a particular time could serve as a reminder of a loved one who has passed away. A clock could symbolize the specific time that a child was born or any other special and memorable event. By getting this tattoo, you can represent an important moment in your life and make time stand still with this tattoo. This moment in time was already important to you but you surely won’t forget it once you have the time inked on your body forever.

A darker clock tattoo meaning is mortality. Someone who gets a clock tattoo for this reason either loves death tattoos or they want to send the message that they are focused on getting as much done during their lives as they possibly can. Even those this is a slightly darker meaning, it could still be looked at as an inspirational tattoo since it helps the owner get more out of life.

While some people will look at this tattoo as having a darker meaning, but it can also be a celebration. Many cultures look at death as a new beginning or a time for rebirth so instead of looking at the darkness as a bad thing, one can look at this symbol as a positive.

Grandfather clock tattoos are also quite popular. There aren’t too many additional meanings that can be used with this design, but these clocks are often thought of as both classic and beautiful. It is not uncommon for someone to get a tattoo of an old grandfather clock that their family used to own. In that way, the meaning is personal and could be a way to remember all of the great moments from the past.

A warped or distorted clock face is often a representation of the white rabbit from Lewis Carroll’s Alice in Wonderland, which has further symbology, or is sometimes an image taken from the surrealist painter Salvador Dali. The dripping or melting clock is an emphasis on the handless clock and its disregard for structured time passage. Alternatively, a distorted clock image can signify a deluded sense of time or perspective.

As is the case with most tattoo designs these days, the clock itself does not have to be the only part of the design nor does it have to be the centerpiece of the tattoo. For example, if a person wants to get a clock tattoo to represent death, they will probably at least toy with the idea of adding a skull to the design. Likewise, a positive clock tattoo might include other cheerful images to make the meaning come through a bit clearer.

The clock is an incredibly versatile image and can be manipulated into numerous meanings depending on how it is rendered. Colored tattoos generally add a more cheerful or positive edge to any image, allowing greyscale or black and white to portray more serious tones. Regardless of style and color, the clock is a distinct symbol of time, a significant era or a moment in life.

We suggest taking your time when looking for a tattoo artist when trying to get your clock tattoo and this goes for any kind of tattoo. Look for an artist that is proficient in the style you want your tattoo inked in and if you still aren’t sure, take the time to sit down and talk with your potential artist to make sure you are comfortable with that person and that they can help you design the tattoo of your dreams.