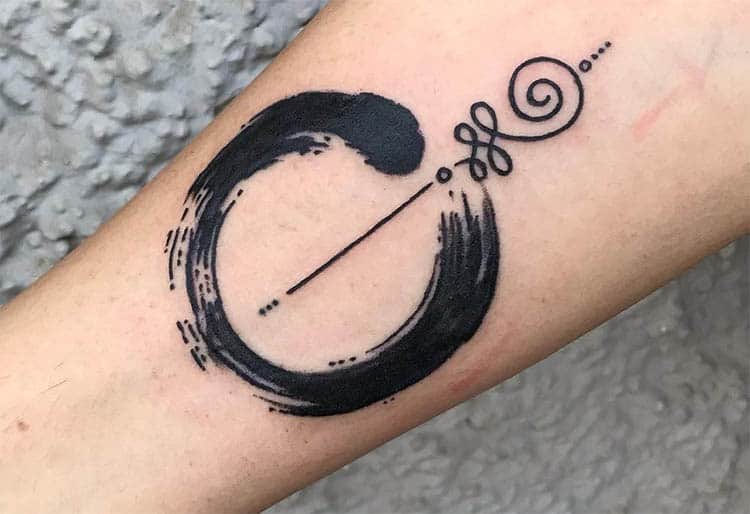 For anyone that follows Zen philosophies, they know there are many ideas that you try to make a part of your life. Most of us try to adopt some Zen way and apply them to our lives but it isn’t always easy. We are so involved with our lives and keeping up with what society tells us we should be doing that we lose track of ourselves. It’s important that we are checking in with ourselves and trying to remember some of those Zen ways we are trying out. A great way to keep these ideas at the forefront of your minds is by getting a tattoo and in this case, there are many Zen tattoos to choose from. Then Enso symbol is a great choice.

The enso symbol is a Zen or Buddhist symbol that has a great deal of meaning. It is one of the more popular Zen symbols and many that believe in the philosophy will know what this symbol represents. However, many haven’t see this symbol or aren’t sure about what it really means.

In this post we are going to review the history and background of the enso tattoo. We will talk about the meaning behind the enso tattoo and what it means to those that decide to get this inked on their body. We will also talk about some of the different variations tattooed incorporating the enso symbol and something else meaningful. Many times, these additional symbols will change the meaning of the tattoo. We hope that by the end of this post you feel informed enough to consider getting your own enso tattoo.

The image of the enso looks like a circle drawn with a paint brush. Some people draw this circle completely closed but, in most cases, the circle will be drawn with an open space. The mechanics and tools used to draw the enso are going to be the same as the ones that will be used to draw traditional Japanese calligraphy. It involves using a brush to apply the ink to thin Japanese paper known as washi.

Like we stated above, the enso might be closed or open. In the case where the symbol is open, it allows for development and movement in addition to leaving room for perfection. People that practice Zen can relate to the idea of wabi-sabi or in other words, the beauty in not being perfect. On the other hand, when the enso symbol is drawn or tattooed as closed, it might represent perfection. This is similar to the perfect form of Plato. It was the reason a circle was being used in the construction of cosmological models for centuries.

Drawing the enso is different than tattooing it but the image should look like it was painted on with a brush. When drawing it, you will see the enso drawn in one stroke of the brush. When drawing within the rules of Japanese calligraphy, when drawing the enso, you should do it swiftly. Once it is drawn, you do not change which means every enso will have slight differences and this coincides with the idea of imperfection.

Enso means “circle” in Japanese. The concept of this image is tied very closely to Zen practices. In Japanese calligraphy, it is one of the most common subjects and this applies even though the enso is not a character.

The enso tattoo symbolizes strength, enlightenment, infinity, the universe, the void and elegance. It is also known to represent the Japanese aesthetic in itself. This tattoo or drawing is often considered a type of minimalist art and an “expression of movement”. It is a simple and clean tattoo that has a very powerful meaning.

In it’s most broad sense, the enso tattoo meaning is tied in with the qualities of the universe. It conjures up its limitless power, grandness and natural phenomena. It can also symbolize the void and the essential state in which all dualities and distinctions are taken away.

This symbol is also sacred in the Zen school of the Buddhist way of life. It represents the perfect state of meditation or the infinite void.

When tattooed, the enso image also represents the moment where the spirit and body can create because the mind is totally free. In the case of a tattoo, you letting the artist draw the enso to their own specifications is a perfect way to express the idea of imperfection. Because every enso image is not adjusted at all after the stroke of the brush, this could be the equivalent of that.

Even if we are only talking about the image of the enso, they are all slightly different. However, when getting the enso tattoo, people have been known to add other imagery to the tattoo to add meaning. Below are a few examples of enso tattoos that we enjoy.

The enso tattoo is often tattooed with the tree of life in the middle of the circle. This means the person with the tattoo is embracing the idea of an imperfect life. This is a great way to symbolize the idea of being Zen and accepting your life for what it is.

The enso tattoo with a lotus flower in the middle also tells a story of imperfection. The lotus is a beautiful flower sitting on a pond that hovers over much and dirt. In that way, you will rise from the mud to create a life that is imperfect in terms of what everyone might think but perfect in your eyes. It’s accepting what life has in store for you but knowing you can rise out of the worst parts of it.

Not all variations include other images. In this case we are talking about the style of watercolor when getting your enso tattoo. It fits beautifully with the theme of the enso tattoo as the watercolor style can look like it was painted on with a brush. It seems to be the perfect blend of originality and also keeping the idea of what the enso tattoo was supposed to be.