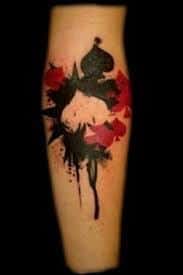 Spade tattoos aren’t the most popular tattoos around today, but plenty of people still get one of these designs for a variety of reasons. What’s odd about the spade tattoo is that it has a wide range of meanings, so you usually have to be close the owner to know exactly what their spade tattoo means. A spade is a symbol of many things from the military and battle to divination and the ominous. The significance of each tattoo can be revealed in the detailing that accompanies it including any numbers that are included as well.

Taken from the centuries-old French suits of playing cards, the spade is another name for the original “pike” suit. The pike or spade is a symbol of the guard and the spear that they carry as a means of protecting the castle and the kingdom that it rules. These symbols were derived from the German suits which are rooted in the Latin suits where the spade was originally a sword. The spade is wrought with European history which is reflected in a spade tattoo design.

When one choses to receive the spade tattoo, a specific card may be included to accompany the spade and create a more specific piece. The queen of spades may be chosen for a more feminine design and include only the “Q” along with the spade symbol to indicate the queen card. The king of spades may be used alternately to create a masculine tattoo with the “K” as the indication of this. A same-sex couple may receive a King of spades and Queen of spades tattoo to symbolize their relationship. An “A” may be included instead to indicate the ace card, a symbol of both one and eleven, both high and low rankings. These tattoo designs are almost always done in black to be true to the suit that they represent although any color or pattern could be used to better represent the individual who receives it.

The specific card used along with the spade is often a representation of ranking. The ace, because of its value in card games and gambling, is a symbol of prestige and prowess as well as wit and cunning. The queen and king are appropriately a symbol of regality and signify importance. A specific number could be used to represent one’s favorite number or they could use the “7” as it is known as a lucky number.

Rather than a solid black spade, bohemian designs are often used to fill in the spade to create a more decorated design. Thick white lines and dots are used to create the pattern and add interest to the spade. The decoration also give the spade a more traditional appearance that harken to the “Old School” style of tattooing. A number may be included in this line work as well.

Sometimes gamblers love gambling so much that they will get a spade tattoo to show it. The spade is the most unique shape of the four card suits, so it makes sense that it’s more popular than hearts, diamonds, and clubs. It also has the most meanings, which you will see below. When ranking suits of cards, spades is the highest, which is why some people get the spade tattoo to represent power. In these cases, the owners either want to be seen as powerful or they want to achieve big things in their lives. It could also be used to intimidate other people.

Remember that spades are more than just symbols on cards; they are also digging tools. There aren’t too many tattoo designs out there that represent labor, so some people will get the spade tattoo to mean exactly that. If they are hard workers or want to remind themselves to work hard every day of their lives, the spade tattoo would be a pretty fitting pick.

In tarot cards, the suit of swords (spades) is associated with the noble class or second estate which denotes the social importance of those who sport it. This also includes the military and the spears, swords, and bows and arrows with which they fight. When spades emerge during a tarot card reading, the representations are generally mischievous and foreboding which has led to the association between the spade and the ominous. In this way, the spade is associated with the occult as well which emphasizes the sinister side of the suit.

The spade tattoo can also be a pretty dark tattoo when the owner wants it to be. While the ace of spades can simply mean that the owner loves cards, they could also get it to represent death. When the spade does have darker symbolism, it will often be paired with a grim reaper, blood, or other dark images. Skulls are frequently added to the center of the spade tattoo to create an ominous tone to the design. The shape of the spade mirrors the shape of the shape of the hollow nasal cavity allowing the skull to complement the spade. Because the spade is a representation of weaponry (the pike), death is a theme that suits the design well.