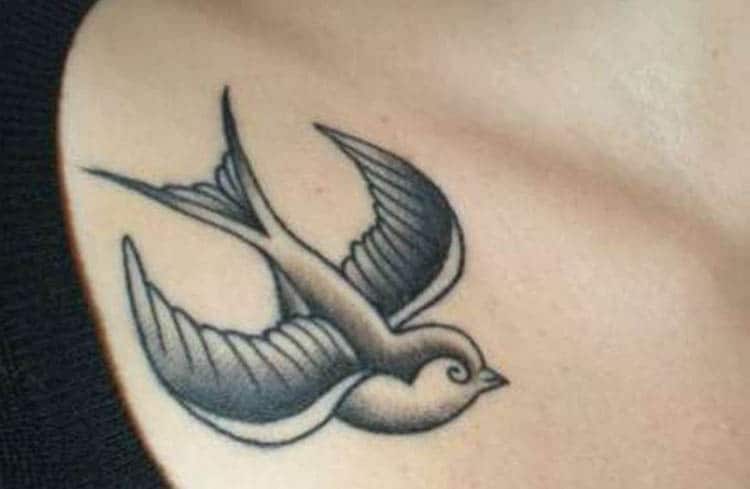 The sparrow, while not the flashiest bird type, has become a popular choice for tattoos. Sparrow tattoos are usually associated with freedom, love, and commitment, but there are many other great meanings that can be attached to these designs.

For decades, they have been used as a standard in animal tattoo imagery. Traditional style “Sailor Jerry” tattoo images often include swooping sparrows with extended wings to indicate swift flight. The movement of the bird is a symbol of liberty and the freedom to travel where one pleases as well as quickness and cunning. A sparrow with wings spread, clearly in flight, can also symbolize a swift mind, which is a unique meaning.

While many may not see the sparrow as being a bird associated with love it has become a symbol of that over the years. When these birds mate, they mate for life and become a symbol of monogamy and fidelity in relationships. Tattoos bearing a pair of sparrows can represent not only love, but a strong commitment and loyalty. Sparrows are birds that are almost always traveling in a cluster with their clan. This offers them protection and in terms of a tattoo design this can be used to convey inclusion and community. In this way, sparrows are an appropriate choice for marriage or couple’s tattoos and are placed on either member of a partnership. Less romantically, sparrows may also be used in the case of friendship tattoos.

In ancient Egypt, they believed that sparrows would catch the souls of those who were passing over. The sparrow would find the traveling soul and guide them to Heaven to help protect and preserve the departed. Rather than depicting it in the traditional style, as an Egyptian symbol, the sparrow can be rendered like a hieroglyph with other Egyptian imagery included to create a larger piece. Due to this belief, many people in modern times use sparrow tattoos as a way to memorialize their departed loved ones. Often, a banner may be included bearing the name or birth/death dates of the person they are honoring. A pair of sparrows can be designed carrying the banner to further the idea of a soul that is caught and protected.

Like the Ancient Egyptians, Mariners also believed that if a sailor dies at sea, the sparrow will take their soul to heaven. Along with nautical imagery, sparrows are a large part of traditional sailor tattoos and serve as a means of protection and preservation while on the open waters. Sparrows typically fly over land and not near the water and can serve as a representation of land and security for sailors. In the traditional style, the bird is depicted from above in flight and often done in black and white or with blues or reds. Flowers can be included or images like anchors and compasses to create a fuller image.

These birds are also a symbol of freedom to many and are often chosen by those who do not wish to be bound by societal rules. An example of this would be the sparrow tattoo sported in the movie Pirates of the Caribbean by Captain Jack Sparrow. The sparrow as a representation of counterculture is connected to the roots of tattoo design in the Western world and its origins on sailor’s bodies, people who lived outside of land and society for much of the time.

The sparrow is a cunning creature that is adept at camouflage and flight. They are always on the move searching for food or providing for their young. Clouds or other sky imagery is often added to depict a sparrow in flight. A sun and clouds can be included to indicate day and add brightness to the design while stars and a moon can be depicted with the bird to create a darker tone. These characteristics make them a great symbol of creativity and productivity as well as the idea of keeping one’s burdens light to avoid a heavy heart.

The sparrow is also considered to be a symbol of joy to some people. As you might imagine, this is a meaning that a lot of people can get behind in their tattoos. The sparrow could represent a person’s want for joy in their life, or it could just mean that they are proud to bring joy into other people’s lives. Believe it or not, there really aren’t that many symbols of joy out there, so the sparrow is the bird tattoo to get if you want to use that meaning.

People in creative fields will sometimes get their sparrow tattoos to show off their artistic sides. These birds are known for coming up with some creative solutions to their problems, including finding shortcuts through the sky to their destinations. If you are an artist, a musician, or someone who simply loves being creative, you might want to look into getting a sparrow tattoo.

Another extremely cool sparrow tattoo meaning is productivity. They seem to get the most out of their lives by constantly moving and working, and best of all it seems to bring them joy! If you are the type of person who is happiest when you are efficiently using your time, then you’ll probably like the sparrow. If you do decide to use this meaning, you might want to show the sparrow working on something in the design.

If you happen to be interested in bird tattoos and you were looking for a design that shows you love the simple things in life, then you should definitely look into getting a sparrow tattoo. These are not the types of birds that go off on their own trying to find something to do. No, they are the birds that love to stick to the basics, though they definitely do those “basic” things in creative ways.

There really aren’t too many tattoos out there that represent someone’s friendliness, so this is definitely a good one to get if that is a quality you are known for and/or are proud of. This can work as a personal tattoo just for you, or you can even get it as a matching tattoo with a friend. In many cases people who choose to use the “friendliness” meaning with their sparrow tattoos will get multiple sparrows in the designs to make the meaning that much clearer.

Similarly, you can get the sparrow tattoo to symbolize your close friendship with someone else. Again, this can work as a personal tat or a matching tat. Those who get the friendship version of the sparrow tattoo will often have two or more birds flying together, sometimes even with smiling faces. These can work with realistic sparrows or even as cartoony sparrows.

Another great meaning that you can use with sparrow tattoos is inclusiveness. These birds can go off on their own, but they are always happiest when they have others with them, regardless of whether they know those other birds or not. If you are someone who tries to find a way to get everyone involved, this might just be the bird tattoo that you want to go with. This is yet another case of the sparrow representing something that you just aren’t going to get from other animal tattoos.

Sometimes people decide to get their sparrow tattoos because of one or more of the meanings mentioned above, but in some cases they simply like that it is a black bird since black is a great color in tats. Keep in mind that most bird tattoos share many meanings, so you might want to consider getting a sparrow design if you know you like its color and you don’t necessarily want to get too specific with the meanings. Of course, you can always use any of the sparrow tattoo meanings mentioned above if they make sense for you later on in life!

Sparrows can be designed realistically to focus on the beautiful coloring and structure of the small bird. They are often chosen because many different types of sparrows are found around the globe and serve as a uniting symbol. All types of sparrows are quite small but clever creatures and represent both good and bad luck in a variety of world cultures.

In modern designs, the outline of the flying sparrow is used and filled with patterns or line work, often in a Bohemian or Indian mehndi or henna style. This can be done specifically for aesthetic appeal but also to indicate personal style.

The sparrow is a harbinger of an individual’s style or preference, a symbol of the freedom to express oneself however one chooses. With this in mind, you can probably see why a lot of people like to go in new directions with their sparrow tattoo designs. You don’t have to be too creative with these tattoos, but a lot of folks like to end up with unique tattoos to ensure that they don’t one day see the same design on someone else.

Where you choose to place your sparrow tattoo won’t change the meanings you use, but it can enhance them. For example, some people who want to use the “friendliness” meaning will place one sparrow below each collarbone, which adds in a very nice effect and makes the meaning that much clearer. You really can place these tattoos anywhere you want to, but you should think about how one area might work better for your design over the others.

Regardless of whether you want to get a very simple sparrow tattoo design or a more complex one, you will definitely want to find an artist who you can trust to do the job right. A good idea is to look through some portfolios to see how well they have done on other people’s bird tattoos (or other animals). Once you do find the artist you want to hire, tell them the meanings you want to use and any other extra details you might want to include in the design. Going through those steps will greatly improve your chances of ending up with a sparrow tattoo that you will always be proud of.

Hopefully you now have a better understanding of what the sparrow tattoo can represent and some of the ways that you can get these bird tats designed. The fact is that the sparrow has more meanings than most other birds, making it an excellent choice for a lot of people. If you like the look of the bird and found that one or more of the sparrow tattoo meanings we’ve mentioned work perfectly for you, contact a local tattoo shop to have a design drawn up for you.