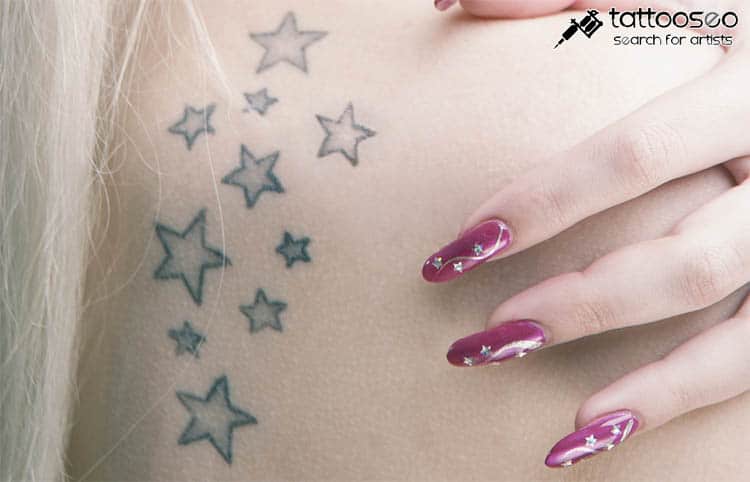 A star tattoo is a broad symbol that can range from simple to complex, a field of stars covering a large space or a single star placed on the wrist and hold countless meanings. For many the star has been a symbol of honor, hope, intuition, desire, and guidance, and much more. It is a religious symbol, a symbol of spirituality, an icon of aesthetic, and an image that can be introduced into any design. There are several different types of star tattoos each with their own deeper meaning.

Being as meaningful and cool looking as the star, it is no surprise that people love to get stars tattooed on their body. There are many different styles of star tattoos and each variation has its own meaning. They aren’t all images of stars in the sky. These stars hold great meaning to the people wearing them.

What is a Star?

We all think we know what a star is. We look up into the sky at night and see the sparkling balls of light. Stars happen to be the subject of many stories, poems and tales. However, do we really know what a star is? I know I didn’t at first, so we wanted to share some information on the star.

A star is a brilliant gas ball, made of mostly helium and hydrogen, that gravity holds together. The star is supported against gravity, produces small doses of heavier elements and produces heat and photons because of nuclear fusion reactions in the core of the star. The sun happens to be the star closest to the earth

These stars didn’t just appear one day. Everything in the universe has its origins and the star is no different. If you refer to the star formation theory, stars are created out of small clumps that are inside huge gas clouds. At this point, the gas cloud collapses in on itself and during the process of this collapse, the material within this cloud heats up under the gravity it has created.

After the gas gets up to 18 million degrees Fahrenheit, the hydrogen nuclei start to meld into helium nuclei and from that point, the star has been created.

Temperature is big indicator of a star. Depending on how hot the star is will tell the story of the color of the star. Cooler stars will show a redder light but when the star burns at a higher temperature, you will see more of a blue star. The biggest star out in the universe is called the R136a1. It is a Wolf-Rayet star and is 265 times the mass of the sun. That means it is enormous. The surface of this star burns at 50,000 K. Red dwarf stars can have tiny solar masses and can be as small as 0.075 solar masses. The surface temperature of red dwarf stars is around 4,000 K.

Within a few million years, the biggest stars will exhaust all of their energy. However, the smaller red dwarf stars can burn for billions of years because they don’t burn off as much energy.

The five-pointed star, or pentagram, is seen on countless flags around the world including the flag of the United States, Ethiopia, Ghana, Honduras, Iraq, and many more nations. Often, they are colored a bold red, black, blue, or yellow. Tattoo designs that feature single stars with any one of these bright colors can be a symbol of nationalism of the individual’s home country.

Pentagrams are the most common type of star that is seen in tattoo designs and are easily incorporated into literally any design. Often, a large star outline is rendered and filled with patterns or images that the individual identifies with. Patterns like paisley, lace, mandala-like designs, animal skins, or something as simple as stripes are all used. Gradient colors and shading are sometimes used as fillers as well. In these designs, the meaning of the image is often arbitrary, leaving the appearance of the star as the appeal. In other designs, the outline of the star is disregarded and the pattern itself is used to compose the shape of the star.

The nautical star is another pentagram. It is designed to appear dimensional with lines extending from the center of the star to add depth. The sections that are created with these lines are alternately colored and have been a traditional tattoo symbol, or “sailor jerry” design. Typically, the colors used are red and black or green and black. For sailors, traditionally the red and black represented the port side of the ship whereas the green and black represented starboard. Additionally, the red and black nautical star also symbolized a sailor who had been across the Pacific Ocean at least three times.

Because sailors relied heavily on celestial navigation, the North Star tattoo was a symbol of hope and guidance. The nautical North Star is sometimes designed with beams of light extending from the top and bottom, or north and south points, of the star. Regardless of the type of nautical star, banners are introduced to the design to allow for quotes and phrases to be introduced while also keeping with the traditional tattoo theme. Other nautical imagery is often added as well, such as anchors, ships, rope, ocean waves, and sea birds.

Six-pointed stars, known as hexagrams (or a sexagram in Latin), are generally used to symbolize the Star of David, a prominent Jewish symbol. The six points represent the twelve patriarchs/tribes and the two triangles are known as the letters “Dalet” and “Yud” which were the letters assigned to Judah. In other cases, when surrounded in a circle, the six-pointed star symbolizes the “divine mind”, which is used by numerous occult members.

A hexagram is a basic symbol in Hinduism that forms the root of most mandalas, symbolizing the perfect relationship between humanity and the divine. When this balance is consistent, the hexagram represents the attainment of nirvana, the ultimate achievement in Hinduism, Buddhism, and Jainism. The shape is made from the combining of two equilateral triangles to create the hexagram, also a perfect symbol in mathematics, and serves as a symbol of harmony between all opposing factors; masculinity and femininity, human and cosmos, life and death, light and darkness. The hexagram is also found at the center of the anahata, the heart chakra, surrounded by twelve petals representing the lotus flower.

There are numerous more types of stars made of various shapes to form different numbers of points and create symbols that hold great significance in different belief systems. An eight-pointed star created by combining two squares is known as the Star of Lakshmi in Hinduism which represents eight manifestations of the goddess Lakshmi and the qualities of health, prosperity, knowledge, strength, progeny, and power. This figure is also often used in mandala designs.

When this type of star is designed with a circle in the center it can also be the symbol of Rub El Hizb, a Muslim sign that represents the recitation of the Quran. This is sometimes used as a Jewish symbol as well.

Stars are often pictured with crescent moons which symbolizes the celestial and in some cases a whimsical character. Clouds are sometimes included as well. Fields of stars are also frequently used as backgrounds to larger pieces or on their own to emphasize an affiliation with the nocturnal. In a deeper sense, a field of stars represents the night sky and the cosmos that surrounds us which invokes a sense of mystery as well as beauty.

There are many reasons and variations of the star tattoo. There is a plethora of meaning behind these as well and it depends on what you have tattooed with the star or the way it is tattooed. That is the amazing thing about this symbol. It is so diverse. The same can be said about making sure you know what you are getting when you get a star tattoo because you could mistakenly get a star that symbolizes something you do no want to represent. However, this will come with doing your research and talking to the tattoo artist who should be able to help guide you.

If you have done your research and feel like you could use a hand finding an artist, let us know. We have years of experience in making sure a customer gets connected with an artist that can do the job right.