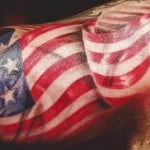 The national flag of the United States of America, the American flag, symbolizes their national anthem lyrics naming the USA “the land of the free and the home of the brave”. Believe it or not, there is more than one American flag tattoo meaning and plenty of designs to choose from. Some people decide to get their American flag tattoo simply because they like the look of it and they are proud of being Americans, while others attach deeper meanings to these tattoos.

The bold red stripes are a remnant of the colonization that birthed the United States because they are adapted from the solid field of red that is representational of the British flag. The white stripes were added to even the very first version of the American flag to convey a separation from Great Britain. In this way, the stripes represent the American’s independence from the British Crown. Some Americans love this part of their country’s history and will gladly use this meaning with their American flag tattoo.

The deep blue field set in the upper left corner of the flag is embellished with 50 white stars, which represents the 50 United States of America. This can cause some design issues for people who want smaller tattoos, but artists can shrink the stars down to near dots if clients request a smaller American flag tattoo.

You will find the stars on just about every American flag tattoo, but some people will go a bit further than that. Some American flag tattoo owners decide to make their state pop a bit more by making one of the stars a bit different than the others. While none of the stars officially represent any state, some people go left-to-right, top-to-bottom to figure out which state is theirs. This way they can darken or liven up their state’s star on the flag.

The American flag must be handled with great care and a certain etiquette must be followed when it is raised, lowered, and folded. Because of this, people take the design of their American flag tattoo a bit more seriously than other tattoo designs. They want every star to look exactly the same as others, and they want every line to look identical on their skin. This puts a bit more pressure on tattoo artists, but they also understand why their customers care so much about their American flag tattoos.

Defacing an American flag is a punishable offence because it represents honor, dignity and respect for the country. The flag as a tattoo portrays these qualities as well as a devotion to the country itself. Some people see pride in one’s country as one of the most important parts of life, which is a major reason why they might get an American flag tattoo. They want to show all of the love and respect for what the flag represents, so they wear it proudly on their skin.

American pride and nationalism has resulted in countless citizens choosing to get American flag tattoos, often accompanied by a bald eagle, the country’s national animal, or a significant historical building or landmark like the Whitehouse or Mount Rushmore. These tattoos give off the clear message that the owner is extremely proud of where he or she came from. Right when you see one of these American flag tattoos on someone, you can assume that they are proud to be from the U.S.A.

The flag is often depicted waving and rippling, symbolizing America’s resilience to adversity. This is one of those American flag tattoo meanings that many people do not pick up when they see it, making it a more personal meaning than the others. These are considered to be “new age” American flag tattoos, and they have soared in popularity in recent years.

The United States, for many, is a symbol of freedom and liberty. The national flag is such a significant symbol for the United States of America that school children are taught to memorize the Pledge of Allegiance, which is addressed to the flag, the representation of the nation. In this way, the flag is a metaphor for the country itself which leads any image of the flag to become an immediate symbol of American Nationalism.

As you can see, there is much more to American flag tattoos than just showing where a person comes from. You can attach a bunch of great meanings to the American flag tattoo, but in the end it almost always represents someone’s love for being an American.

If you plan on getting one of these tattoos, it would be a good idea to think ahead of time how you want the design to look so you can pick the perfect place on your body for it. You will also want to find a great artist so you can be sure you will get an American flag tattoo that you can be proud of.