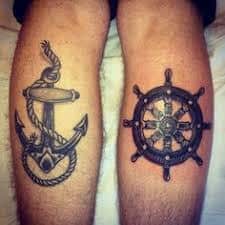 Since Sailor Jerry was putting tattoos on his and his friend’s bodies, the nautical tattoo has really taken off. Of all these nautical themed tattoos, there are few that happened to stick throughout the years. The anchor and wheel tattoo has been a popular option of years. By themselves, these images have a great deal of meaning but in times like these, people seem to be connecting the two images to create one tattoo that holds meaning to them.

I mean, tattoos have meaning for everyone, but some images hold more meaning than others as far as a consensus goes. This may be up for discussion, but we will try to make our argument in this post. We will talk about the history of nautical tattoos which leads us to the anchor and wheel tattoo. We will talk about the symbolism of these images and what they mean to the people that have the tattoos. We will also discuss a few variations of this tattoo and talk about what they mean. By the end of this post you should have a better understanding of the meaning behind the anchor and wheel tattoo.

Nautical tattoos, or sailor tattoos, are a style of tattoos that were worn by sailors and had specific traditions that went along with them. Sailors were well known for getting old school tattoos. These are the kind of tattoos that you will see in flash books. Stuff like swallows, mermaids and pin ups are some of the tattoos sailors would get.

Nautical tattoos seem to be lumped in with this style. Many of the nautical images that you might see on a sailor’s arm are designs that Sailor Jerry would call his own. Sailor Jerry had a giant influence on modern tattooing. They now hold an annual event called the “Sailor Jerry Festival” which honors his legacy.

The anchor tattoo has a rich history and has been a subject of tattooing since the Sumerians. This image was tattooed by early Christians who were persecuted for their beliefs. It is said that Christians would cover cross tattoos with anchors to avoid persecution. Hidden in the meaning, the anchor tattoo also symbolized Jesus’ connection to the sea as him and many of his disciples fished.

Some also believe the anchor tattoo represents the feminine and masculine connection as the crescent symbolizes the woman while the rod represents the man.

However, when sailors started getting this tattoo, the image took on different meanings. Today it is said the anchor tattoo represents a sailors last hope when the storms of the sea are rough. It is also said this symbol means honor, hope, salvation, protection, security, dedication to the greater good and loyalty.

Now we move on the ship wheel and its meaning. Many time the ship wheel will be just tattooed in a decorative fashion, but others say it is very symbolic. The wheel provides direction when a sailor is out at sea. Nature is the decider of whether the waves or wind will help the sailor on his journey. The wheel represents the journey of trying to make it through life unscathed. However, we all come away with scars in life whether they be physical or emotional. The wheel represents the journey. It also stand for destiny, journey, purpose, opportunity, life’s path, discovery, navigation and direction.

So, when you put these images together, the wheel will try to get you through the storm and the anchor is the last hope. Both of these images represent something needed in the journey we call life and therefore, they are positive symbols that we all need to lean on at times.

You might also want to ask the person with the tattoo what it means to them. This is the best bet to find out the meaning of the tattoo.

Be The One To Guide Me But Never Hold Me Down

Be the one to guide me but never hold me down. This phrase is sometimes tattooed with the images of the anchor and wheel. The first part of the statement refers to the ships wheel. It is a symbol of guidance. On the other hand, the person with this tattoo is asking for guidance but doesn’t want to be held back. The image of the anchor represents being held down or anchored to a place in life.

We also tend to see matching anchor and wheel tattoos, or someone wearing one image and a friend or loved one with the other image tattooed. This represents the bond of these two people. Just as a ship needs a way to guide them and a way to stop, your life might need this friend or loved one. The connection between these two people can be represented by the anchor and wheel tattoo.