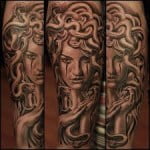 A fan of Greek mythology? If so, there are some Gods and characters that we have heard about over the years. Some of the more familiar characters from Greek lore include Thor, Zeus, Athena to name a few. Some people love these stories and sometimes get tattoos to represent their interest in the subject. Depending on the idea you are trying to get across will impact which God or Goddess you choose to have tattooed. However, if you are here, you might have a good idea of who you want.

Meet the former Goddess turned monster in Greek mythology. Medusa is hard to not look at. Even though she was once beautiful and hard to resist, after being turned into a monster, it is still tough to look away. Most likely because of her hair of snakes but whatever it is, a single gaze would turn you to stone.

Medusa is a singular figure in mythology, but she brings a lot of meanings with her. People who get a Medusa tattoo can use one or all of the meanings we go over on this page, though they’d be very complex people if they did that. Medusa tattoos have plenty of different designs to choose from, too, which is why it is a tattoo that has gained some steam over the years.

Medusa is a gorgon, a creature of ancient Greek myth characterized by her fatal gaze and head of snakes. Her image is meant to terrify, turning onlookers into stone. With this Medusa tattoo meaning, owners might want to give off the impression that they are unapproachable. They could also use the tattoo to mean that people who get to close to them usually get hurt. This is a tattoo of someone that hasn’t dealt with all of their demons yet and maybe socially shy or uncomfortable.

One of three sisters, Medusa is the only mortal and therefore, the only fallible gorgon. Some people might get their Medusa tattoos to show their vulnerability. Medusa seemed as if she could not be killed but she was just as vulnerable as any human. Many of us, as human beings, come off a little gruff or unapproachable. This could be for many reasons but this version of the Medusa tattoo is a way to show that people are vulnerable and they might be trying to protect themselves. These tattoos have special characteristics, but at the end of the day they are human beings who need the essentials just like everyone else. Funny enough, this Medusa tattoo meaning is one to show a person’s “normalcy.”

Medusa’s eventual beheading lead to the birth of Pegasus and the lesser known Greek figure Chrysador, a giant with an enormous sword. In this way, Medusa can be a symbol of fertility although her body only produces offspring following her beheading. Her death becomes a process of regeneration, connecting her further with Gaia. This might seem like an odd way to represent fertility but many people thrive on being different and cryptic. The confusion on why someone picked the tattoo they did is always a fun way to start up a conversation.

She can be depicted either as a beautiful maiden or horrifying hag, depending on the intended tone of the image. In fact, some people try to capture both sides of Medusa in the same tattoo. In this way, they are showing that they have a good and bad side. We all have a side that we are afraid to let out to the surface. It might be sadness or anger but we usually carry some sort of baggage with us throughout our lifetime. This tattoo can be used as a warning to others to treat them the right way or else they are going to see the angry version.

Her myth is tragic, a woman who was born of the gods but cast into mortality and cursed as a hideous, snake-haired woman. Interestingly, both this and the opposite meaning can be used when someone gets a Medusa tattoo. They can get the tat to symbolize the fact that they feel different in a bad way, or they can get it to mean that they like being unique no matter what they look like. Of course, some people will get it to mean both sides of that coin.

In the same light, this tattoo might represent remorse for a decision one made in the past which was the reason something changed in their life. In Medusa’s case, she was cast down by Athena for being the apple of Poseidon’s eye. This wasn’t necessarily her fault but it cost her the beauty she once had and her immortality. The Medusa tattoo might represent what we have turned into because of our decisions.

She is eventually beheaded but remains an iconic figure of protection as well as female wisdom. You simply aren’t going to find too many better symbols of female power, which is why the Medusa tattoo has been getting more popular. Medusa was strong and formidable. Many of us hope to take on those traits but because of the woman’s oppressed past, she might use this as a symbol of strength and reminder to not let any person hold you down. If the right meanings are used, the Medusa tattoo is a great image if you want to represent feminism in a new way.

Countless relics from Ancient Greece depict the image of the snake-haired Medusa as a symbol of protection. It was ritually used on armor, weaponry, entrances and doorways as a means of warding away evil. The image of Medusa itself definitely makes people hesitate, which is exactly what some people want when they get this tattoo. It’s not necessarily an aggressive image, though it could be used in that way. Instead, it is there to make people pause and act with caution.

The grimace of Medusa’s face petrifies any malevolent spirits in their tracks, keeping those who brandish the image safe. For this reason, some people will get their Medusa tattoo to feel safer in their own skin. As an ancient protection symbol, the Medusa in this way also symbolizes aspects of the mother goddess, especially as a child of Gaia, the creator.

In a more modern sense, her image can be used as a warning to keep others at a distance. Dark tones enhance her hideous features and present the visage of Medusa as a frightening monster. The snakes around her head are often shown as coiled and ready to strike, emphasizing her power. This is yet another Medusa tattoo meaning that is used to show someone’s strength.

Contrarily, Medusa can be portrayed as a fair-faced, mortal woman. There are multiple meanings that can be used with this image. Some will use it to show that it’s important to find the beauty in people, while others will want it to mean that they see the beauty in people. Neither is an obvious Medusa tattoo meaning, but they are strong meanings nonetheless and important to someone that has used this idea to portray their message.

Various versions of the myth of Medusa recount her rape by Poseidon, which leads to her transformation into the horrifying monster. Someone who has suffered an extreme hardship might use the Medusa tattoo to both remember and get past the event. This is an uncommon Medusa tattoo meaning, but someone who both likes the image of Medusa and has had something bad happen to them might find it to be the perfect representation.

We suggest taking your time in the search for a tattoo artist and when you think you’ve found one, have a consultation with them. The most important fault about getting your tattoo is to make sure that you feel comfortable with the people tattooing you. This is important because it will be a memory you have forever.

If you have been searching for a long time and are still having trouble finding an artist, reach out to the team at Tattoo SEO. We have years of experience of connecting artists and customers. We make sure the match is fitting and that both artist and customer will bond over the new tattoo.

If this doesn’t help give you some ideas, check out the list of pictures below to get some new ideas for your next tattoo.