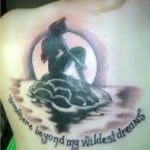 From Ariel to ancient lore, mermaids have been a large part of our culture for decades. The beautiful half human, half fish creatures are known to be alluring and mysterious. This might be why our culture has such a love for these mythical creatures. They are well known in children’s stories as well. This is why you will see so many kids dressing up like a mermaid for Halloween or even just around the house when playing dress-up.

Dressing up like a mermaid is just one way to show our fascination with the mermaid. Another way that people like to do this is by getting a tattoo. A tattoo is the ultimate show of admiration and love and for the tattoo enthusiast that gets a mermaid tattoo, it must mean something special to them. This is because the mermaid tattoo doesn’t only represent thinking that mermaids are neat, they are also symbolic of many traits that we either think we have in common with the mermaid or we would like to attain.

Mermaids, ancient mythological half-woman/half-fish creatures, dwell in the waters of the ocean, signifying a drive towards the sea. Because they require large bodies of water to survive, the image of the mermaid conveys a thriving aquatic soul. Mermaids have been present in mythology for thousands of years and are noted in the histories of countries all around the globe. In almost every continent, there is a rich history of mermaid and merman folklore that reveals tales of their guidance and mischief. Their iconography is found in sculpture and other artwork from various cultures making them a popular image for a mélange of personalities.

In ancient Assyria, the first mermaid mythology was born. The goddess Atargatis, a deity of fertility and protection, transformed herself into a mermaid after failing to protect her lover from death. The mermaid in this context is a symbol of shame and regret and may be pictured very solemnly, condemned to a life in the ocean. In most mermaid tattoo designs, a mermaid is a positive symbol that conveys freedom, especially in the water, and a joy of movement.

Both benevolent and malicious, mermaids can serve as the harbinger of a deadly storm or as a beautiful mythological water nymph, playing light-hearted tricks and games. As a siren, enchanting sailors to their peril, the mermaid is an ominous creature, leading ships to crash in to jagged rock or into a tempest. As a deep-sea sprite, the mermaid appears much like a dolphin alongside boats and ships, swimming and diving in the wake. In this way, the mermaid is an aid to the sailors as it guides them through the ocean waters. She, or he, is a representation of a safe and peaceful journey.

Aside from the beautiful, captivating folktale, mermaids have also been depicted as ugly or horrifying creatures that appear horribly mutated. Many infamous sailors and captains throughout history have claimed to have seen mermaids and that they bring bad luck. When mermaids are displayed in this way, repugnant rather than beautiful, they serve as an omen of danger. The monstrous mermaid, less human and more sea creature, is an image of distrust and uncertainty, a forewarning of malice.

Mermaids are also frequently done in a traditional “Sailor Jerry” style that was worn by sailors as symbols of luck. These mermaids are generally placed on the arm and are featured with other nautical imagery like anchors and rope. Often, they mimic a pin-up girl theme and have their breasts exposed or covered by long tresses of hair. Banners are sometimes included as well to hold phrases significant to the individual and to emphasize the traditional style.

The more traditional mermaid is a mesmerizing image of beauty. A tempting woman with the shining scaled tail of an exotic fish, this is the ultimate symbol of a water-dweller. Additionally, the mermaid is a sign of a blithe, carefree lifestyle, a desire to soar through the currents of the ocean, a disregard for the problems of life on the land.

Following the release of the Disney film based on Hans Christian Andersen’s The Little Mermaid, the young mermaid Ariel has become a popular image and symbol of innocence. Her iconic long red hair, blue eyes, and purple sea-shell top is rendered in numerous styles to suit a variety of personalities. She is often adopted into the pin-up style and transformed into a sexual character or done in a traditional “Old School” style that emphasizes her bright red hair and vivid green tail. In this way, she is a representation of seduction and may be a memorial of an old lover.

Chinese folklore tells tales of benevolent mermaids whose tears turned to pearls. Tattoo designs that include pearls may reference this myth and may be rendered in a Chinese artistic style with flowing ink and delicate lines that resemble brushstrokes. These types of mermaids are a symbol of patience and peace as well as tranquility. They are often done with only thin and thick black lines but may also include soft blues and reds especially with cherry blossoms or with water scenes.

Some mermaid tattoo designs feature only the tail of the mermaid to represent the carefree and peaceful nature of the water-dwelling creature. Rippling water is often included in these designs to indicate a diving mermaid, half hid beneath the ocean. As the human half is hid under the water, this design is a symbol of concealment. The individual may project only a part of who they really are while guarding the other parts carefully.

Initially, mermaids were created as a representation of the deities of the water in ancient times. At the time, mermaids were representations of fertility and being bringers of life because the ocean offers an endless amount of food to eat. The seas are also very powerful and can cause a great deal of destruction.

Mermaids have been seen for centuries and it is said they were being confused with sea cows (manatees). From a distance, the sea cow looked like a large mermaid and sailors often confused the two. It was said that Christopher Columbus said that he had seen fat and ugly mermaids in the distance during his first trip to America but is known to have confused these mermaids with sea cows.

You can find stories about mermaids in almost all cultures around the world. They are said to usually be beautiful women with beautiful voices and long hair that can hypnotize or mesmerize the sailors and men who here them sing. This is why they were said to bad omens because they often lured ships into the rocks.

The Little Mermaid is what shaped the modern view of mermaids back in 1836 when Christian Andersen wrote the fairytale. He described the princess mermaid as giving up her lovely voice so she could meet a prince that lived on shore. The difference between Andersen’s story and the one done by Disney is that the Disney version had a good ending while the other one didn’t.

There are interesting powers that are said to be possessed by mermaids including telepathy, hypnosis and seeing into the future. With the hypnosis comes the stories of them being confused with sirens who were much more dangerous and aggressive.

Sirens are carnivorous and vengeful mythical creatures from Greek lore. They used to be described as having wings but the Greeks described them as being creatures of the sea. They held the power to lure sailors into death, had the ability to call on storms, they had destructive powers, could cause fog and insanity as well as leading ships into the rocks to crash and sink.

Regardless of the type of mermaid, the creature shows a separation from humanity in favor of the water. The mermaid is a whimsical creature whose life opposes typical land-based human culture. Her image, as the mermaid is much more popular than the merman, is versatile and can symbolize either innocence or sexuality.