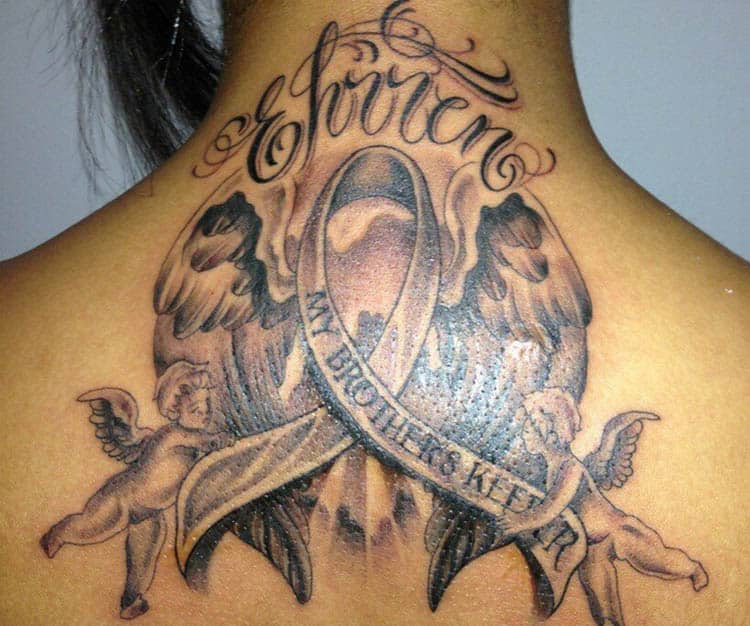 The phrase ‘I am my brother’s keeper’ is a well known saying in the bible, coming from the story of Cain and Abel. In Genesis 4:1-4:16, Cain, being the first born by Adam and Eve, kills his brother Abel, the second child of Adam and Eve. Cain does this out of pure jealousy and envy. When asked what happened to his brother Abel by God, Cain replies by saying ‘I know not; am I my brother’s keeper?’ this signifies that Cain is talking back to God, telling God that he is not accountable for the absence of his brother Abel. Cain saying this is a lie because he does know what happened to his brother, Cain killed Abel because God was more pleased with the ‘sacrifice’ Abel brought him than Cain. Abel brought to God the firstlings of his flock and their fat. Cain on the other hand brought to God fruits of the ground. For whatever reason, God did not see Cain’s sacrifice as acceptable, so he declared Abel with the better gift. There are a couple of different reasons why God did not respect Cain for his gift but accepted Abel for his.

Although the bible does not come out and give an explanation as to why God did not accept Cain’s gift, there are different views on why he did not. The first reason being God wanted a sacrifice, meaning a living creature must be slaughtered and have blood spilled across the ground. Since Abel was a farmer, he simply killed some of his livestock and presented it to the Lord. Cain brought God fruits, which was not considered admirable since he did not have to kill a creature for the gift. Another reason as to why God rejected Cain’s gift was because of the simplicity of the offer. Because Abel had to go through the process of killing his animals, then skinning them and using their skins as tunics, Abel sacrificing the animals for not only their fat and meat but used all of the parts of the animal said a lot. This was saying that no part of the sacrificed animals were left behind. Every piece of the animals was used in one way or the other.

As if the rejection by God to Cain was not bad enough, he was rejected in front of a large group of people. It was a public event that left Cain devastated and humiliated. This left Cain bitter and jealous of his younger brother. After this, Cain invited Abel to go for a walk in the field with him. It was here, where in total isolation, that Cain struck Abel upside the head with a stone, beating him until he was no more. When Cain arrived back without his brother Abel, the Lord asked Cain where Abel was. Cain denied knowing where his brother was, he said he was not his brother’s keeper. God knew Cain was lying instantly and cursed Cain to wander the Earth and to be exiled from the village. Because of this story, being a brother’s keeper means the exact opposite of what Cain did. Being a brother’s keeper means that you are looking out for your fellow brothers and sisters. Not only biological brothers and sisters, but as we are the children of God, we should all treat each other with respect and look after one another. Getting a tattoo with the phrase ‘I am my brother’s keeper’ signifies that you are a trustworthy, and godly human who looks after others when they are in times of need or struggle. This phrase is very heartfelt and relays a strong message. It was Cain’s horrendous attitude and jealousness that got his brother murdered by his own hands, then saying he was not responsible for his brother or his actions really is the lowest you can go. Saying that you are your brother’s keeper, saying that you do watch over your fellow man/woman, shows a great amount of bravery, responsibility, and willingness to put others before you. There are of course many variations of how you could have this phrase designed as a tattoo. Down below are examples of how people took this concept and made it their very own.

Having a tattoo of just the phrase ‘I Am My Brother’s Keeper’ relays a strong and powerful message as it is, if you would like to add an image to accompany this phrase, it could give the tattoo an even more dynamic meaning. Since this phrase derives from the bible and is a popular saying within the religion, graphics of holy objects are often seen within the design. These images can be anything from a pair of hands praying, to angel wings, to a cross. Depending on where you decide to get this tattoo can be the most important part of the process. If you have a graphic in mind that goes along well with this phrase, you want to first establish how large or small you would like this image. If you have a tattoo of a cross with the phrase written in script wrapping around the cross, chances are the tattoo will be leaning more on a larger scale. Because this particular graphic could take up space, it is wise to find a spot you would like it tattooed that will not only look good but be recognizable at first glance to outsiders.

For this particular phrase, it is most common to have it tattooed where others are easily able to see it. This tattoo does not only show that you are there for your fellow person, it also reminds others around us to stick to our moral compass and help others that are in need if needed be. Seeing this phrase on someone can have powerful effects to not only themselves but those around the individual. If you get this tattoo as just the phrase, there are many different text fonts you can choose from. Many people with this tattoo will get it in cursive writing, usually on their forearms where it can easily be read. If this is just a simple reminder to yourself and would like to keep it more private and hidden, getting this tattooed across the chest is another option. Having this phrase close to your heart can be very meaningful, it shows you have a lot of character.