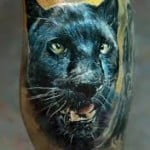 The panther is a symbol that has long been popular in being tattooed. The image of the cat that is a symbol of power in many cultures and the panther has a great deal of symbolism in different cultures. Not only is the panther tattooed in many different styles like realism and watercolor, but the traditional panther tattoo seems to be a very popular option and has been for many years.

Not only does the panther have a lot of symbolism and meaning behind the image but it is also a bad ass looking tattoo. The panther is already a terrifying large jungle cat. You can just picture a pitch-black night and just seeing those golden eyes looking at you. It’s the things nightmares are made of.

The panther is broad term that includes all large jungle cats from all around the globe including jaguars, cougars, and leopards (leopards are indigenous to Africa and Asia while jaguars and cougars are indigenous to North/South America). A panther is described in the Panthera genus as a melanistic color variant. The color variant they speak of usually means the cat is dark brown or black. This is because melanism is the creation of melanin which is a dark colored pigment in the skin. So, this means a panther is generally either a black jaguar in the Americas and known as Panthera once or Panthera pardus which is a black leopard found in Africa or Asia.

The black panther, a misnomer referring to any large, black, clawed jungle or forest-dwelling cougar, leopard, or jaguar, is often used as an image to convey ferocity or a savageness. The darkened melanin that creates the black coat of the cat is seen as advantageous in the wild, adapting to the darkness of the dense jungle. The symbol of the black panther portrays a unique and mysterious predator.

The white panther, any albino leopard, jaguar, or cougar, is much rarer than the black panther, having been spotted very infrequently. These creatures are so scarce that there are very few accounts of their existence. The image of the white panther is an icon of an incredibly rare and unusual spirit. As ferocious and wild as any other panther, this creature is so rarely seen, it’s nearly mythical.

The image of the panther, usually spotted or multicolored, is also named in ancient Greek mythology. The spotted panther, or pantera, was a large panther ridden by the gods, most often Dionysus, the Greek god of wine and celebration. The panther in the Greek legends feasted and slept for days, giving off a sweet odor that attracted prey to its lair. Later, in medieval times and the period of classical revival, the panther was a symbol of the heraldry, the creation and brandishing of coats of arms. The typical image of the panther in this way was depicted with streaks of fire emanating from its orifices to symbolize its attractive scent.

The panther of the Greek gods is much like a siren, luring prey towards itself in order to feast and eat again. There is a cyclical representation of pleasure (eating and sleeping) with this mythical panther that differs from the meticulous predatory skill of the animal. However, the image of the panther, regardless of context or intention, is a commanding symbol of a fierce, wild animal.

As your spirit animal, the panther has many meanings. It is said to mean: death and rebirth, understanding of death, the ability to know the dark, power and aggression and to have a guardian energy. The panther tattoo can be a symbol of you harnessing the darkness that you’ve experienced in your life and using that energy to drive you forward.

As you can see, the symbolism for the panther is very strong with very powerful meanings. To have the panther tattoo can be a reminder to embrace the things that scare us the most, so we can turn that into a positive energy that will lead us on our journey through life.

When getting the panther tattoo, you will have options as to how you want your panther depicted. It is a very stoic animal so how you choose to have it tattoo might lead to additional meaning or focus more on specific symbolisms.

The image of the panther in fierce position would be an image that represents the powerful nature of the beast. The panther is able to take down prey in a single bite and with this tattoo, you might decide to have it represent the power in you.

The Panther tattoo in a calm state is one that represents its more nurturing traits. The panther is also a symbol of the feminine so when a woman gets the panther tattoo, she is reinforcing her femininity and harnessing the power of the panther. The panther is also known to have a very powerful sensitivity. The hair on their body is able to pick up very subtle vibrations in the wilderness. It is a reminder to pay attention to your feelings and the feelings of others. The panther’s smooth dark coat is also connected to sexuality. Therefore, the panther has many connections with the feminine.

This is just a different style of the panther tattoo, but the realistic nature of the tattoo is what makes it so beautiful. The panther is a majestic creature and when done by the right tattoo artist, the final product can be enchanting. It’s important that you look for the right artist to do this tattoo before you jump into the chair. Realism is a very specialized style and not all artists can take on this task so just make sure to take your time in the research phase.

The traditional panther tattoo is one that has been around for many years, but it was most popular in the 50’s and 60’s. Having the traditional panther on your arm meant you were tough. You could see this tattoo from a mile away and that was the goal. However, because of its dark and deep coloring, it was perfect for coverups.

As you can see, the panther tattoo is packed full of symbolism and characteristics that are very desirable. We hope that by reading this you are starting to understand the power of the panther. Whether we are talking ferocity and power or sensuality and sensitivity, the panther covers all of them. It is no surprise that so many people are in love with the idea of getting the panther tattoo. The next step is finding the right artist to make your dream come to life. Take your time in the process and do your homework. Have a sit down with your potential artist and make sure you are comfortable with them. If you need help finding an artist, please reach out because we’d love to help you find the artist of your dreams. 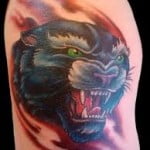 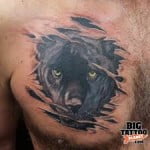 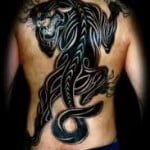 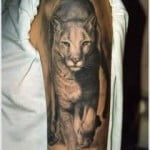 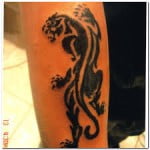 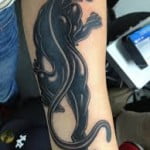 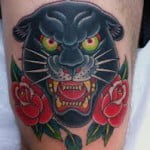 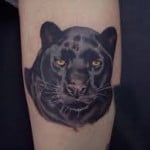 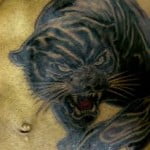 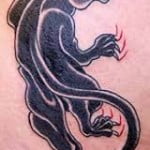 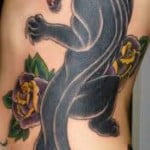 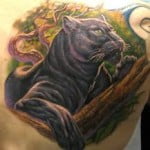 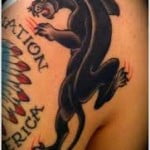 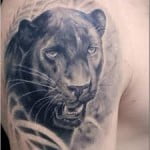 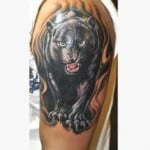