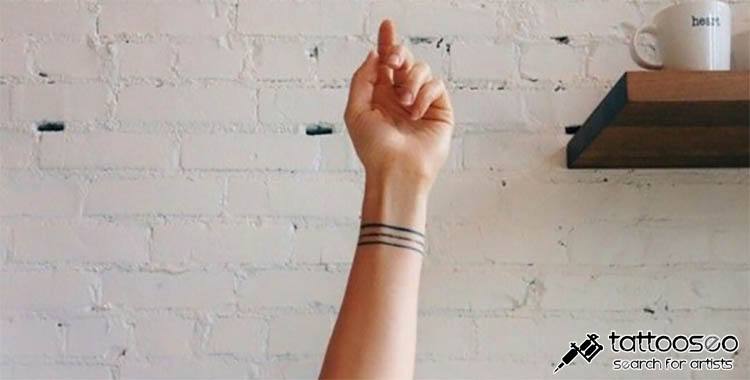 There are some images that you might look at and have no clue what it means. Simple tattoos that have a great deal of meaning but if someone were to ask you what it meant, you wouldn’t know where to start. In this case, we are talking about one of those kind of tattoos that could be confusing if you didn’t do your research about it. To the naked eye, it just looks like three simple lines tattooed but beneath the looks of this tattoo, you’ve got a tattoo that has a great deal of meaning.

Three single lines is a simple tattoo design that can hold a plethora of meanings and is easily manipulated by other imagery incorporated into the image. Three lines offers a lot of potential for a tattoo that can be personalized to many different individual needs. The lines can be rendered thick and bold or as thin as a pencil line. They can be colored, color can be added into the background or the lines can be black or fade as they progress. The lines can swoop around the body and create rings or can form any type of shape from a simple square or circle to a hexagon. The significance of the lines generally lies with the number three and the various indications of that number.

Three bold, thick, black lines that wrap around the arm or leg, or any other body part, is often an expression of symmetry and the uniformity that is found in nature. In other cases, the three lines can be symbolic for three significant people, periods of time, events, or any other place or idea. Without additional images or script, the lines are a subtle symbol of what matters most to the individual. The lines can be colored any shade, either all the same or varying to add another element to the design and create differing meanings with each line. The lines can also vary in length or in the case of rings, one or two can be incomplete while the other, or others, are complete. The differences in each line can serve as symbols for characteristics of whatever it is that the line represents. With the lines, names can be added or symbols that help add clarity to the meaning of the design.

The three lines can also represent a path you have chosen. For example, many of us take many paths in out lives and we figure out along the way that many of these paths lead to nowhere but we would have never found the right way without running into some dead ends. These lines represent the paths that have been taken on the way to learning about yourself and finding the “right” path. It is up to the person wearing this tattoo to determine what it means but we like this version as we are all trying to learn and grow as people so the three lines tattoo as the path you have taken is a fun one to us.

While the concept of three lines seems simple, the meaning can be quite significant.
The Roman numeral for three appears as three single short lines that are usually black and sometimes rendered more like capital “I”’s. The indication of this design is three or the third and could be a symbol for a third born child or a third accomplishment, or it could represent the concept of “third time’s the charm”. There are many meanings that can be hidden behind this simple design that are close and personal to the individual or something more trivial.

The tripundra tattoo is based off Indian body art. In this case, this tattoo would be three horizontal lines across one’s forehead. Although most that have this image on their body have it painted on instead of tattooed, many will get this tattoo on other parts of their body to get their message across instead of having it on their face. These three lines represent Shiva’s power that is threefold. These are action, knowledge and power of will. It is also said to symbolize Shiva’s trident or the divine trio of Shiva, Vishnu and Brahma.

It is a reminder of the spiritual direction in which life should be lived, the truth that material and things about the body will someday be ash and mukti is a goal worth striving for. These marks are usually put on using the ash from burnt cow dung and is put over one’s third eye.

If you want the tattoo, it has been seen on other parts of the body and you can send any message you want with it.

Lines do not need to be perfectly straight and three waved lines can rest on top of each other to create a wave symbol that represents the ocean or another body of water. Waving lines, stacked on top of each other or placed vertically, are an elemental symbol in some cases and can be a representation of wind or rain. These lines can be placed anywhere on the body though, depending on the desired length and thickness, some body parts work better than others. The simplicity of the lines works well on smaller and more delicate spaces like fingers, toes, and ears. Larger renditions of the lines are best suited for larger body parts like arms and legs.

In many cases, we have seen the three lines tattoo used to represent a bond between two people. We’ve seen this tattoo everywhere on the body including the arm, legs and fingers. On the finger, it looks like a ring being worn and the lines will represent whatever the person wearing it wants it to. One couple we talked to had matching three lines tattoo and they said it represented faith, love and hope. We have also talked to people that said this represented completely different meanings like being representations of family members.

Some say the three lines tattoo is a symbol of the “third degree” or master mason. The freemasons were (or are) a secret society that dates back to the founding of the U.S. It is said the freemasons have been recruiting some of the most powerful people in the world to work with them. Some of the biggest musicians and actors have been said to be involved with this group.

The key to this tattoo is to realize that you can make this tattoo mean whatever you want it to mean. Like any tattoo, no one can step in and tell you what your tattoo means as every tattoo has special meaning to the person wearing it. What we would suggest is to take your time in looking for someone to give you your tattoo. Make sure the artist you choose has solid linework and shading as these lines could be big and bold. In addition, sit down with your potential artist and make sure you feel comfortable with them.

If you are having trouble finding an artist to work with, reach out to the team at Tattoo SEO. We have over 10 years of experience in matching up customers with tattoo artists that will do the job right. We want to make sure you vision comes to life and in order to do that, we need to make sure you are working with the right people.